Hi, guys! Happy Tuesday! I hope your week is off to a wonderful start! 🙂

This morning started bright and early at 4:45 AM. Instead of hitting the gym, I broke out my laptop and immediately got to work. Monday totally got away from me, so I attempted to make up for lost time. Holy inbox madness! 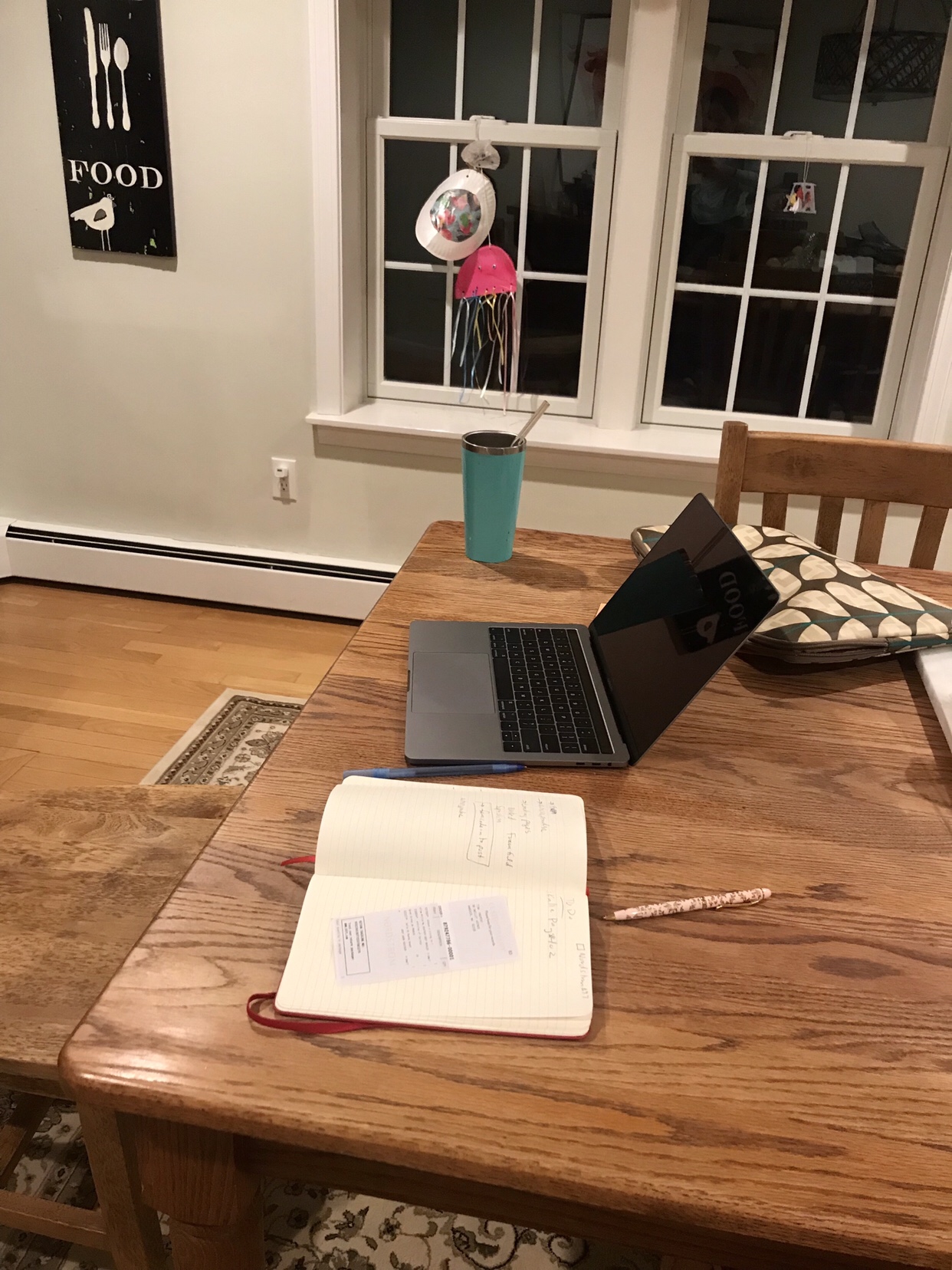 Quinn actually “slept in” until 6:45 AM, so I managed to sneak in a solid 2 hours of work before he woke up. Not too shabby! Once he was awake, I got us ready for the day, which, of course, always includes some sort of shenanigans. Please note his new favorite way to go down the basement stairs – hopping off the side! 🙂 I planned to go to CrossFit after dropping Quinn at school, so I made a blueberry waffle and topped it with some peanut butter so I had a little something in my stomach. 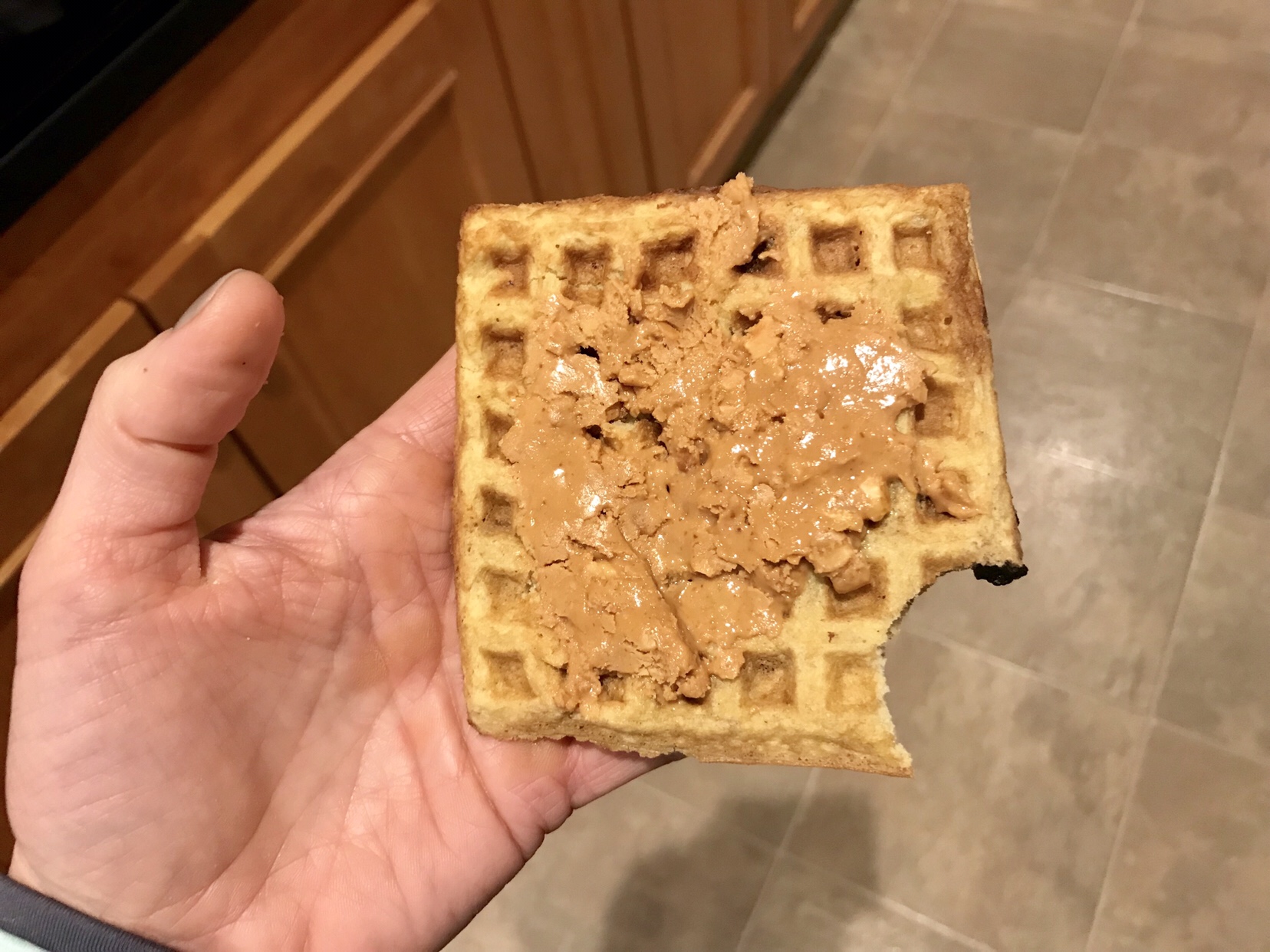 CrossFit was fun this morning. We started with a warm-up and then some Clean + Jerks. I worked my way up to #115 for the set of 5, and it surprisingly didn’t feel terrible. After messing up my back in December, I’ve taken it easy, but I’m slowly but surely starting to feel like my old self again in workouts. 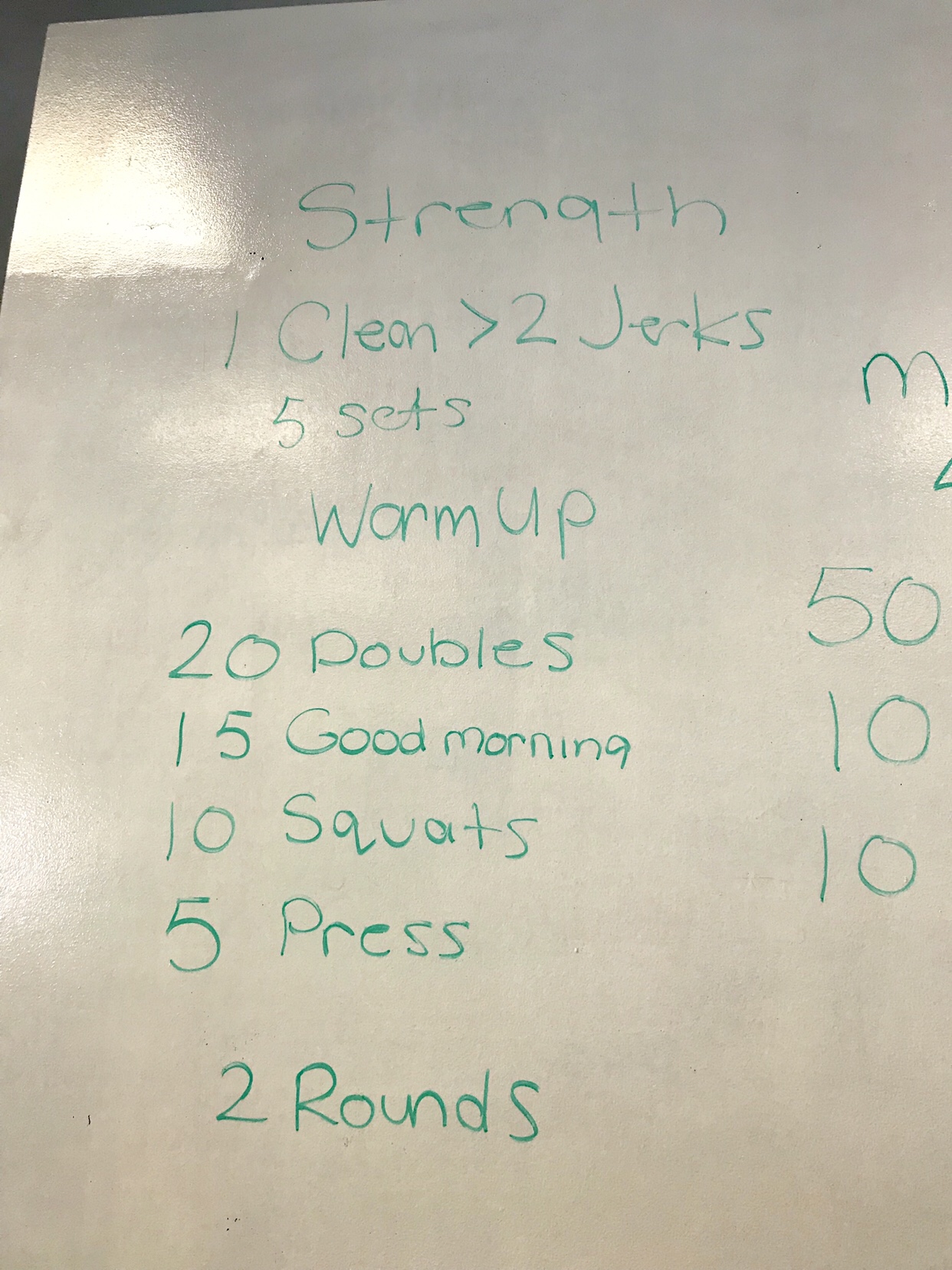 I finished the WOD in 11:55, but, man, my HSPUs were ugly. They’re just not a movement I can do well. I started with one mat, moved to two mats, and then ended up doing Tiger Push-Ups for the rest of the reps. My arms were totally dead, but, honestly, the HSPUs were just not happening for me. Maybe getting them will be my goal for 2018, too? Apparently, I failed at achieving them in 2017. Boo. Oh, well. I’m just here to work out. 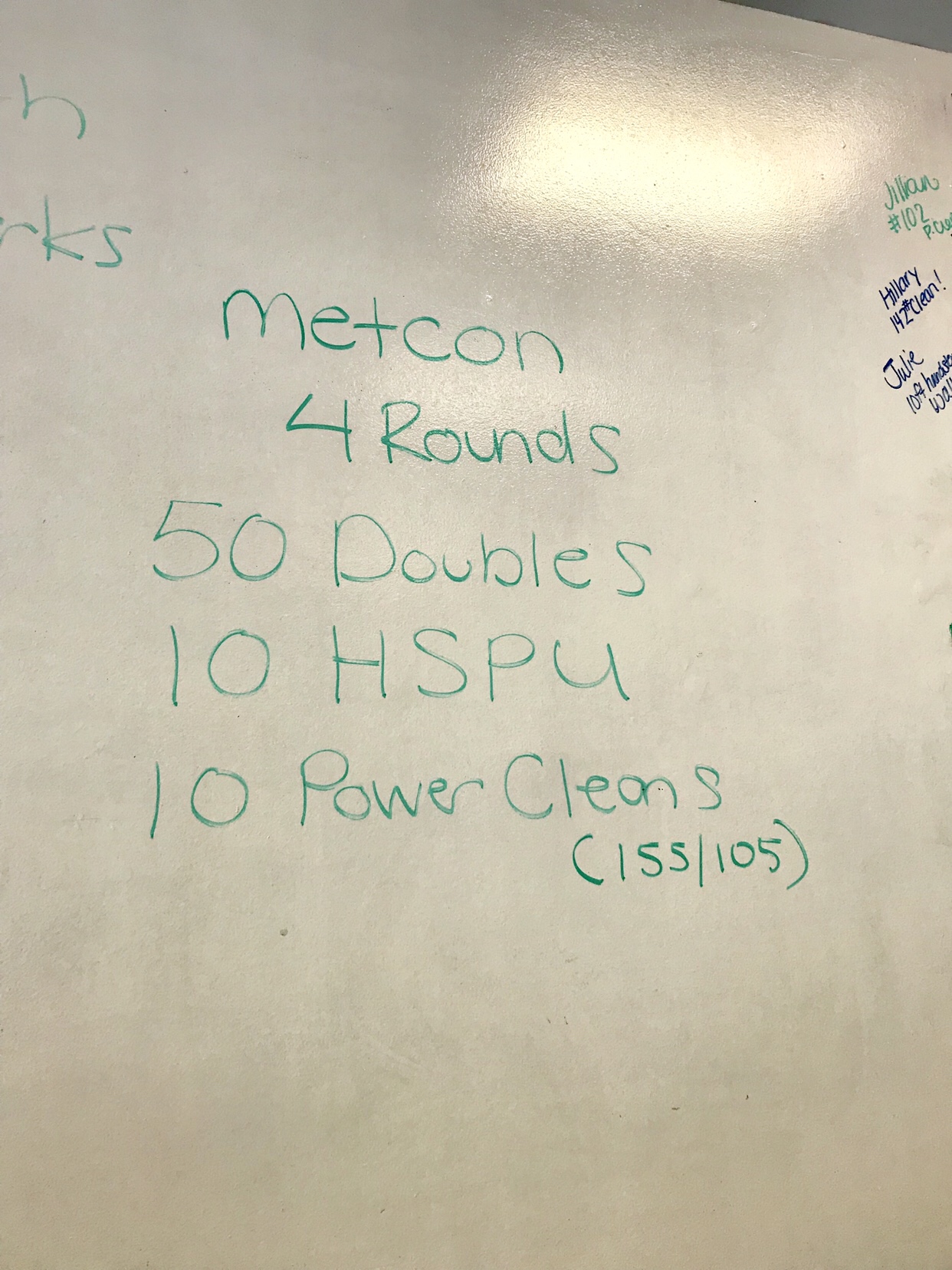 After CrossFit, I swung by Coffee Shack for an iced coffee because we were all out at home and there was no way I was making it through the day on a single mini iced coffee. (My first of the day was a half pour with collagen and chocolate peanut milk.) 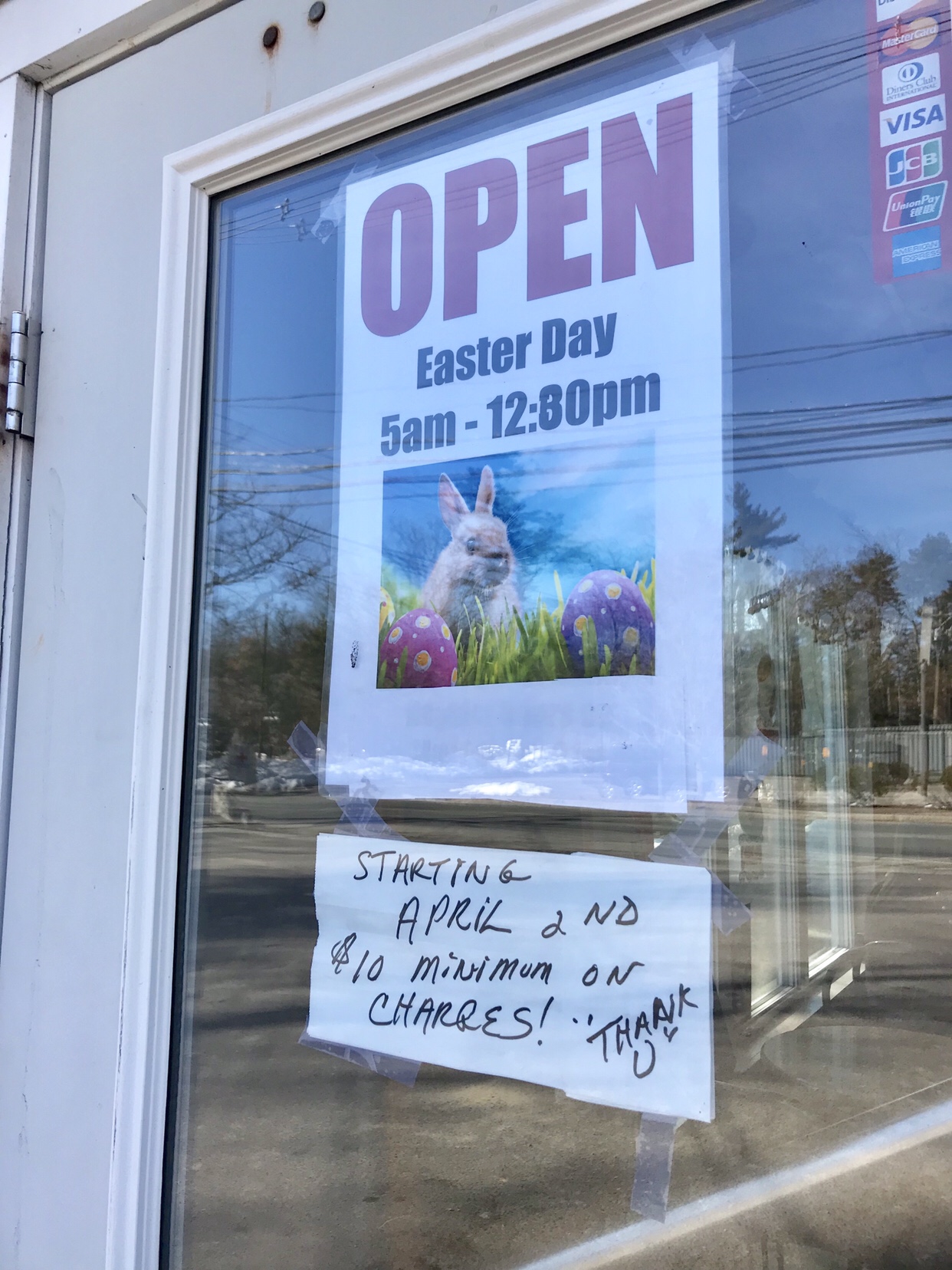 I also snagged a donut sample while there. I mean, I needed carbs to refuel, right? 🙂 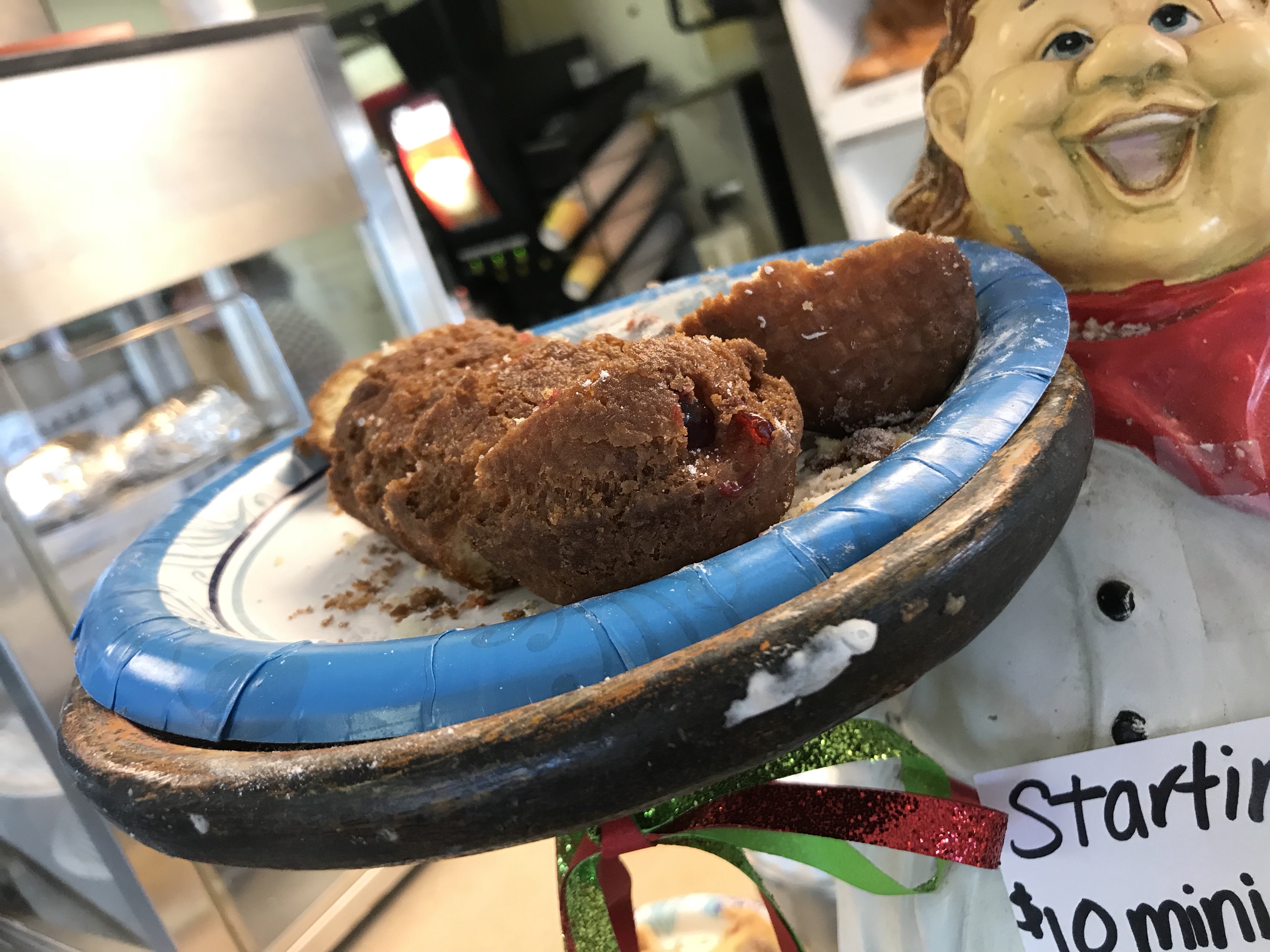 After that, I stopped by the post office to mail a bunch of goodies from my spring Beautycounter promo. FYI: It’s going on until the end of the month! 🙂

I arrived home to Murphy doing what he does best: Crushing the pillows on “his couch.” Well, technically, it’s a love seat, but its cushions are most definitely crushed.

This love seat has been through so much over years. Mal and I originally got it off Craigslist when we moved into our first apartment back in 2007. It actually came with a matching couch, and they were practically brand new.

The guy who sold them to us said they were only two months old, and the only reason he was selling them was because he and his girlfriend broke up. Hey, it was bad for them, but good for us! But I remember thinking maybe the set was bad luck, but 11 years later, the love seat is still kicking and has brought our family, especially Murphy, a whole lot of joy!

But, at the end of the day, the pug couch is absolutely disgusting. It’s typically covered in fur, stained, smells bad, and the cushions are destroyed beyond repair. #puglife

And, at this point, Murphy is the only one who uses it, which usually involves perching himself up on the back of the couch to bark at the mailman and anyone else who walks by our house. It’s kind of annoying and just another reason why we want to get rid of it.

Well, ok, we’re softies and just want our dog to be happy, so we’re in the market for another couch-like piece of furniture, so Murphy can still have “his spot” to continue his daily neighborhood watch. But, this time, we want to find a couch that’s easily cleanable (maybe leather?) or perhaps a wooden bench for the space. Even though Murphy’s barking drives us crazy sometimes, we still want him to be able to look at the window since he enjoys it so much. 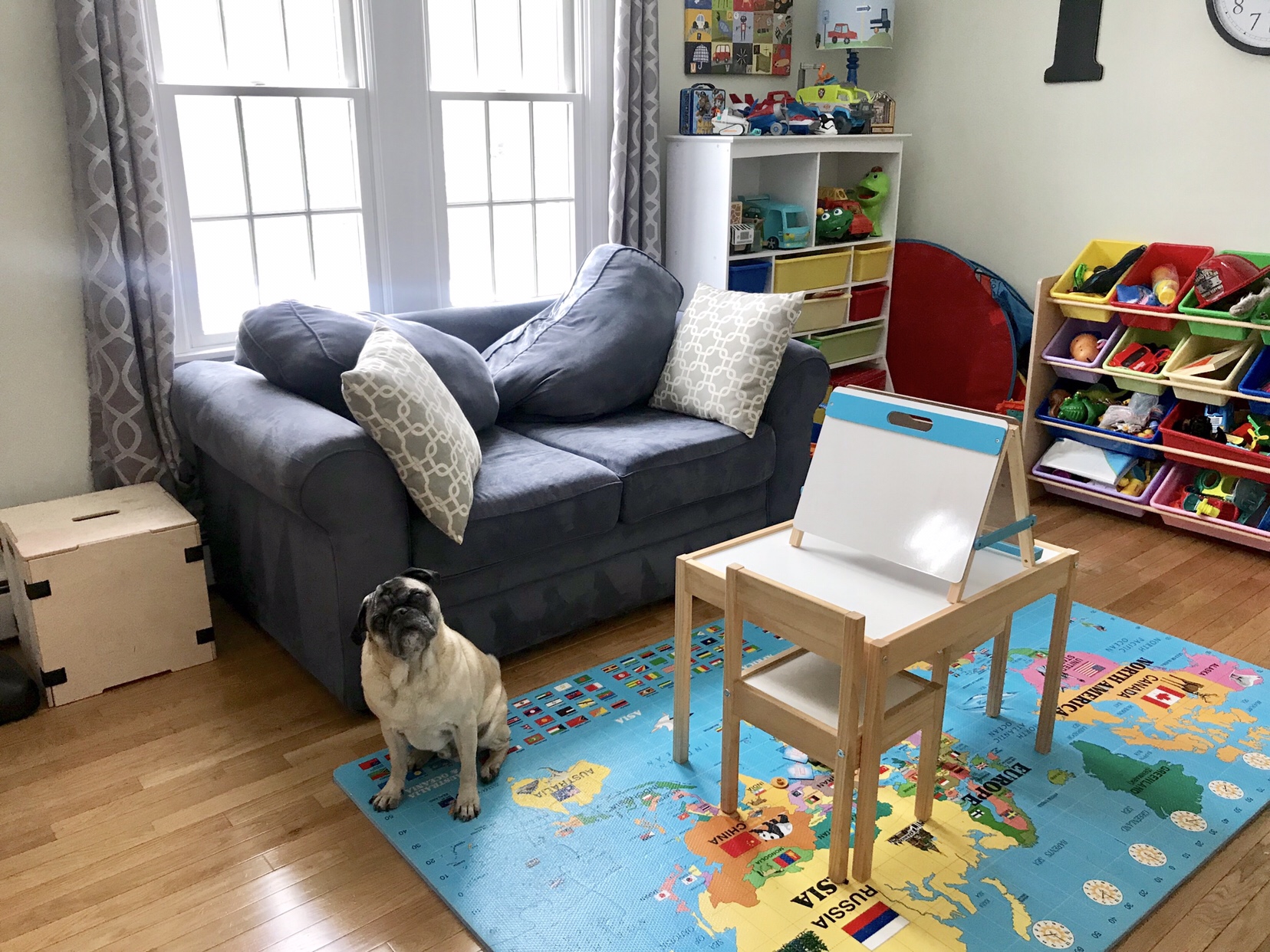 FYI: Here are the details for the world map foam playmat pictured above. I get questions every time I share a photo of it, so I figured I’d give you guys the deets. It’s a really fun addition to Quinn’s playroom! 🙂

Any furniture recommendations for us? Do you have an awesome couch or bench that might work for the space? 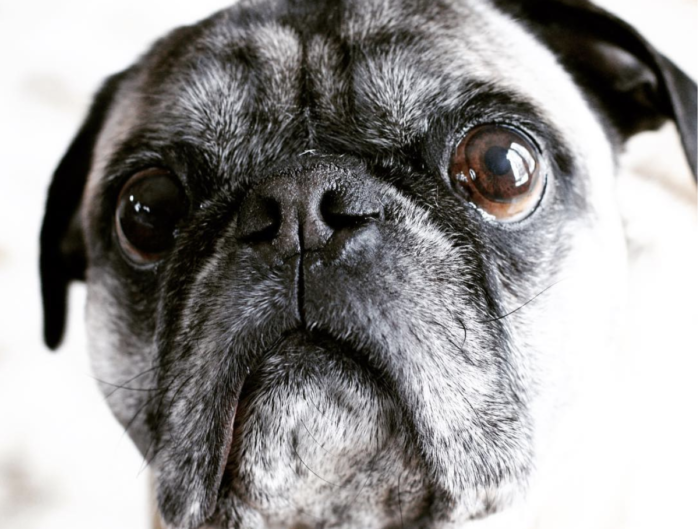 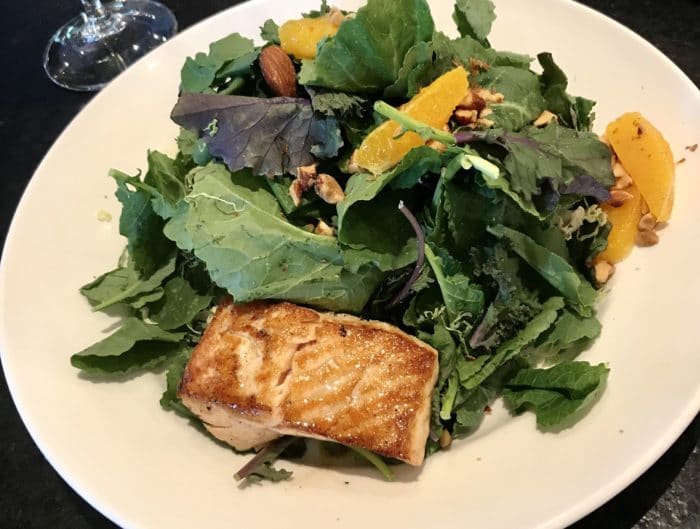 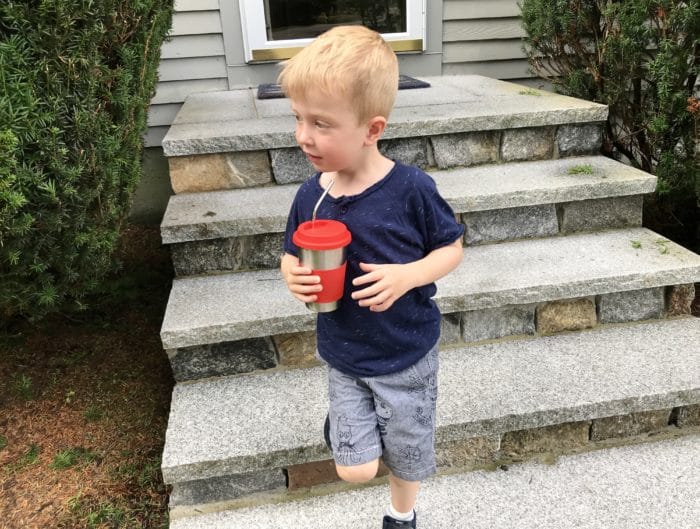 Our bichon shihtzu crushes our couch cushions too. He perches himself up on top and watches us as we watch tv or eat in the kitchen. He also has a window he likes to look out of when we leave the house, he patiently waits for our return. In front of that window I just have an ottoman. It is microfiber and super easy to clean, granted our dog does not shed. But I also place a doggy blanket on it so if he does get sick or leaves dirt, I can clean the blanket instead of the ottoman.

Either way I can totally relate! I would love to have fluffy couch cushions in our living room. And I really would love to remove the ottoman from the window to free up some space BUT I can’t take his window seat away from him.

Have you seen these pet sofa covers at Target?

They have several style and color options – and you just pop it in the washing machine! 🙂

Ooooh, I like that! Thank you for the link! Now we just need a leather couch! 🙂

I’d love to know more about what your workday entails. I.e: when you say you get to work first thing (laptop). I would move to work from home/ business but wonder if it’s boring tasks or something exciting you are doing! I usually picture you writing blog posts but I’m thinking there’s more to it

Everyday is a little different, but I most days are a balance between work and life!

We ordered a piano bench seat (4 individual wooden legs and faux leather upholstered seat) via Amazon for our pup to look out the window! Super easy to move around for cleaning and, because of the faux leather, it’s super easy to wipe clean. It’s a little worn looking now, since we’ve had it for a few years, but it just adds to its character 🙂 plus it’s extra seating, too!

https://www.amazon.com/TMS-Leather-Padded-Keyboard-Storage/dp/B00IPWOEJI/ref=sr_1_5?ie=UTF8&qid=1522178198&sr=8-5&keywords=piano+bench+seat
(kind of like this but the seat doesn’t lift for storage)

That’s kind of what I was thinking! Thank you for the link! 🙂

We cater to our dog also and arrange things so she can spy out the neighborhood, she’s pretty light so she doesn’t crush the pillows, but I do keep the back and seat of the couch covered with blankets so it’s easy to wash the dog smell off once in a while, rather then wash couch cushions. Sometimes the blanket falls but it covers the couch 90% of the time.

Murph leads a sweet life! We have a wooden bench that has a couple of pull out storage things in it that I love, it’s great for stashing toys or shoes. Wood is nice because it doesn’t hold onto dog smells and cleans easily.

We got an ottoman for our corgi mix so that she can still look out the window without beating up the couch – we toss a blanket on it for her and it’s soft so she can cuddle up and the kiddos can join her (and don’t hurt their heads if they bump it):

We thought about leather for our dog too, but a friend suggested against it — she had an issue with doggy nails puncturing the leather (guess it depends on the quality/thickness?). I’ve heard good things about Sunbrella upholstery. We actually just bought a new sofa and just got it w/warranty & stain protection for 5 years. I figure if I can get 5 years out of a sofa with a dog and two kids I’ve basically hit the jackpot.

@Alicia: agreed! My mom loves to tell the story of how her pricey Arhaus leather chair became the family dog’s chair and is now “ruined.” She put it by the window and our dog immediately took a liking to it because it allowed him to comfortably view outside. His nails have totally wrecked the leather so it’s officially his chair. It is no longer nice looking but she leaves it there because he loves that chair and now we all get a good laugh out of the dog having the nicest seat in the house!

6:45 a.m. is counted as sleeping in?! Holy cow! He’s primed for success and to be a morning person 🙂 also, do you ship worldwide for beautycounter?

Oh my gosh that photo of Quinn hugging Murphy is just the SWEETEST!