Murphy Is Having a Rough Week 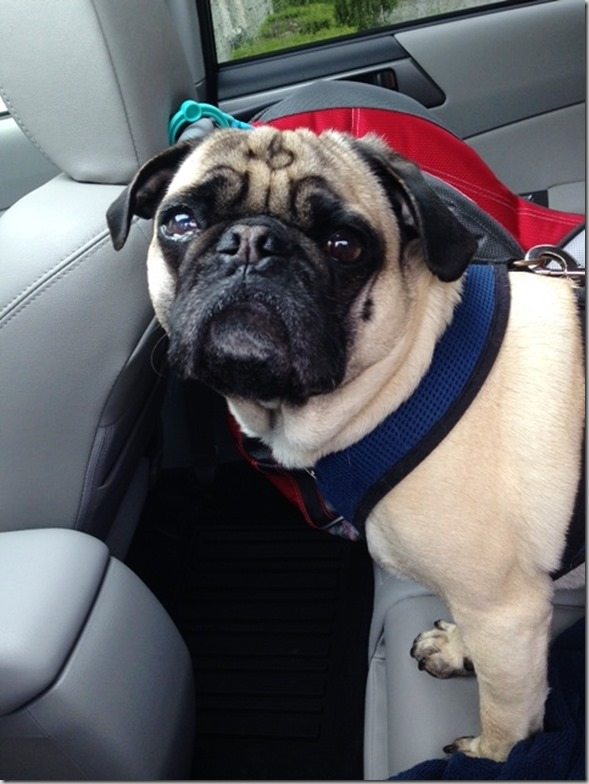 Yesterday afternoon I noticed that Murphy rubbed his face with his paw a few times. His eye had been a little watery and wink-y the day before, but it didn’t seem to bother him other than a few paw rubs, so I didn’t think much of it. I just figured he got a little dirt in there or something. No big deal.

Well, when I took a good look at Murphy’s eye, it looked kind of gunky (not just eye boogers) and he was squinting a lot. At this point, I figured it was something more serious than just a little dirt in his eye, so I called the vet and brought him in for a check-up. Poor Murphy. He’s having a rough week. Side note: Murphy’s skin biopsy was benign, so the bump was probably an infected bug bite all along. Now we know and the peace of mind is definitely worth the time, money, and effort!

The vet checked out Murphy’s eye and determined he had an ulcer on it. She said he probably scratched his eyeball playing or running outside, which happens to dogs with buggy eyes quite a lot. Murphy actually had ulcers in both of his eyes a couple of years ago. I guess it’s a pug thing.

Anyway, the vet sent us home with some eye drops and a “cone of shame” to prevent him from scratching at his eye anymore. If everything works out, the vet said he’ll probably be good as new in 3-5 days, so I hope this and his weirdo infected bug bite are just little hiccups in his health and there’s no “Rule of 3” coming his way. On the drive home, I swung by CVS to pick up a prescription. (I’m in full on flare mode, so my doc is trying another drug to get things under control.) When I returned to the car, Murphy had made himself comfortable in Hippity’s car seat. I guess he wanted to test it out? This dog is so ridiculous. Haha! I spent the rest of yesterday afternoon on calls and catching up with emails. I eventually sat my butt on the couch and relaxed with Murphy. Between the rainy weather and being 39.5 weeks pregnant, I was exhausted. While chilling on the couch, I snacked on a piece of cinnamon raisin toast with almond butter spread on top. Meanwhile, Mal got his sweat on in the basement. We received our new wall timer from Again Faster Equipment in the mail yesterday afternoon, so he was pumped to set it up and use it. The wall timer is definitely one of my favorite pieces of equipment in our home gym. To me, it totally completes it because now I’m really working against the clock during my workouts. I mean, you can’t miss it, staring back at you on the wall, and it pushes me so much harder than I would push myself without it. It’s definitely a home gym essential in my opinion!

FYI: You can get 10% off your order at Again Faster Equipment with code AFcarrot (expires 7/31/15). Also, be sure to sign up for their email list. Again Faster always has great deals on their equipment! Mal’s workout was a variation of the one that our box did yesterday: When dinnertime rolled around, I cooked up some some ground beef with taco seasoning for taco salads. It was simple, quick, and delicious. Mmm! My evening concluded with watching bad TV and eating a million peanut M&Ms.

Do you believe in the “Rule of 3” – basically that bad things (and good things) come in threes?