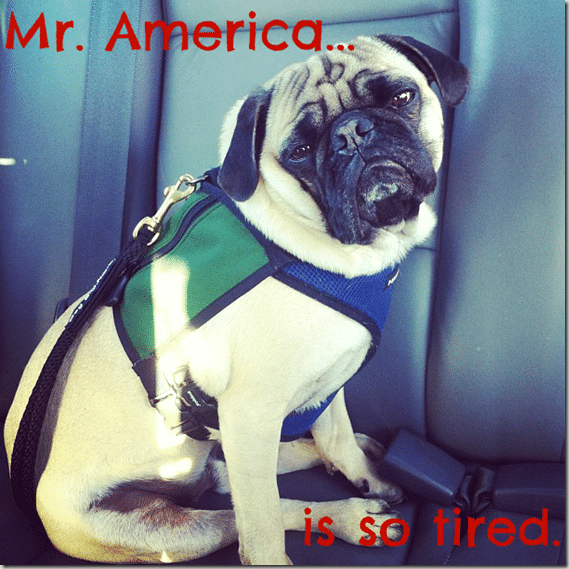 I also did a little shopping and bought a few things for our trip to Hawaii. Obviously, I needed a new purse and pair of wedges. While I was out shopping, I also picked up a Silicone Travel Tube that I found at CVS. It’s basically a heavy-duty squeeze bottle. I already own a couple of travel bottles, but after I use about half of the product inside, it’s almost impossible to get the rest out. This silicone tube thing seems like it’s going to be awesome. There’s some serious squeezing potential! I’ll be sure to report back! While I was out, I also bought Murphy more of his dog food. After running errands, Murphy and I went to do some visiting at the senior home. We’ve visited the senior home a few times now, so we’re starting to see the same faces again and again. While making our rounds yesterday, a bunch of people recognized Murphy and called him by name. One man even gave him a new name.

When we walked into the room of the gentleman, who once owned a pug himself, he saw Murphy and enthusiastically said: “Here comes Mr. America!” Haha! Love it.

Murphy being called “Mr. America” totally cracked me up. I told Mal about it when he got home and we’ve been calling Murphy it ever since. Giving people pug therapy is tough work, so Murphy was exhausted on the ride home. Look at that pathetic face! On the agenda for dinner was burgers with guacamole and Rotel, so I whipped up the quac while Mal made the burgers. (My “recipe” is just minced garlic, lime juice, garlic powder, salt, and pepper to taste.)

I ate a bunch of guacamole with rice crackers while I waited for dinner to cook. I cannot be trusted around it. On the side, we had Sweet Potato Wedges. If you had the chance to do this, would you?

Mal and I are seriously considering it (because we’re crazy).