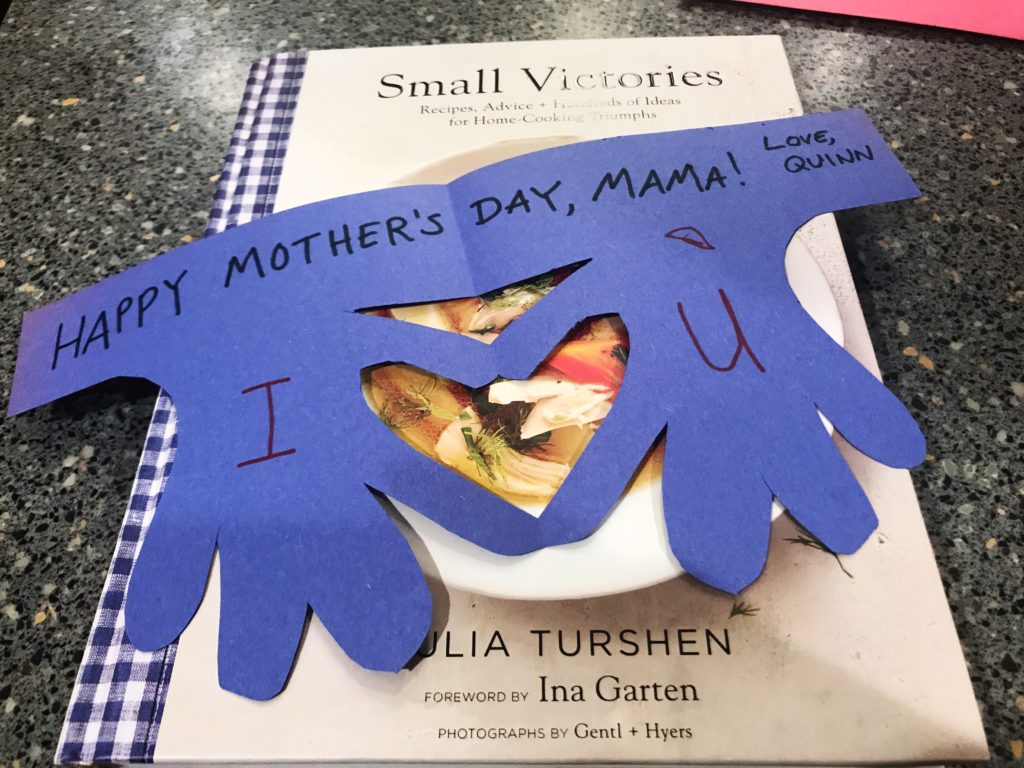 Hello! I hope everyone had a nice weekend, especially those of you who celebrated Mother’s Day!

My Mother’s Day was really nice. I got to sleep in a little and then had breakfast and presents waiting for me when I woke up. Quinn was so excited about his present that he denied me a hug! Haha! When I came downstairs, I asked him for a hug, but he ran right by me, only to go get my present and come back to give it to me. He was just so excited! (After I opened his present, I got my hug!) Mal and Murphy were also also pretty excited about their/Quinn’s present for me, which was a new cookbook. Mal actually heard an interview with the author on NPR, and he thought it sounded right up my alley… and it is! 🙂 I spent awhile flipping through it yesterday, and I’m so excited to make some recipes from it. It has so many easy ideas and techniques for everyday cooking + some awesome tips and tricks for entertaining and cocktails. It just makes everything seem so simple and do-able! My sister and her family came over on Saturday to spend the night. She brought the coolest Finding Dory bubble machine from Target and the kids went crazy over it! It was bubble mania on our back porch!! Then, the boys played in the dirt for a little while. We spent all this money on creating an awesome play area and they chose the dirt next to it. Haha! After playing outside for a bit, we came inside for lunch. On the menu: THE BEST WINGS EVER! And, of course, they were a huge hit with everyone. Even Cousin Matthew liked them! Once we finished eating lunch, we did some arts & crafts before winding down for nap time. Well, sorta. We had some fun with streamers first! 🙂 Once everyone was napping (Matthew rested and watched some TV on the couch), the adults (and Murphy) hung out on the porch and caught up. We had some snacks and drinks, including FitVine Wine, which is lower in calories, sugar, and sulfites than regular wine. A friend from CrossFit told me about it (she actually orders it by the case), so I had to see what it was all about, especially since I’m trying to cut back on the sulfites in my diet.

FitVine isn’t sold at a ton of places near me, so I took an adventure one afternoon to buy a bottle, and I’m so glad that I did. The Sauvignon Blanc is really good! It’s dry and crisp – perfect for summer. Mal thinks it tastes watery, but I like it, especially for a low-sulfite wine. Have you guys ever tried organic wine? Uhhh, it’s disgusting (at least the ones I’ve tried). Save your money!! Haha! Anyway, I liked the FitVine Sauvignon Blanc so much, I bought a case myself! 🙂 After nap time, we headed out for a walk around the block. It was kind of chilly, but it was still nice to get outside and move around. The boys had a blast playing together and exploring! After our walk, we came home and ordered some pizzas for dinner. Dinner actually ended up taking longer than expected, so once everyone was finished eating, we got ready for bed and then enjoyed a movie night. We watch Moana, which is a favorite in both of our houses. I really enjoyed singing along with Qman. My gosh, he’s the sweetest kid. <3 Any Moana fans out there? (We’re obsessed lately.)

Moms, what was the best part of Mother’s Day for you?