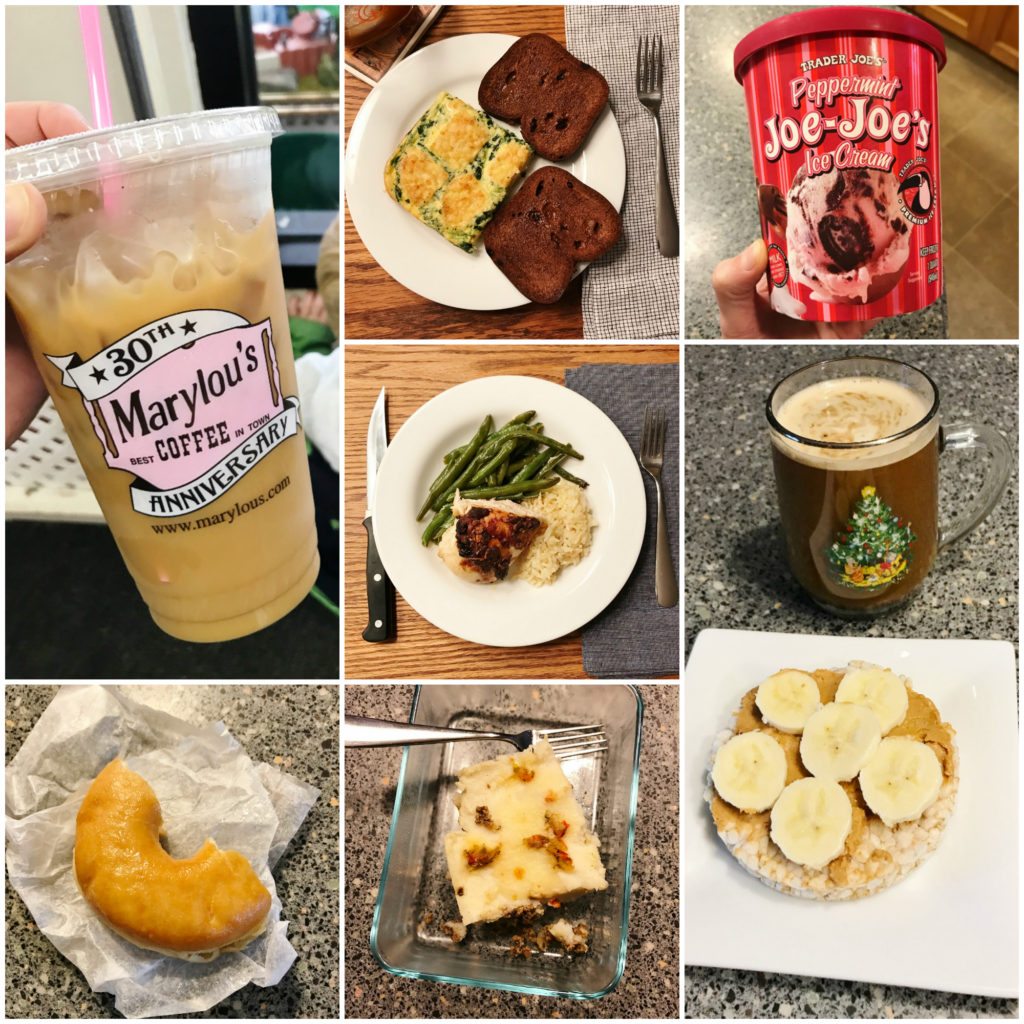 It’s time for another edition of Monday In Meals where I recap what I ate throughout the day with a few random adventures thrown into the mix. It’s really been a hit with you guys, so it’ll likely become a regular feature on CNC. Ok, here we go! Mid-morning, Qman and I headed to CrossFit. He played with the “kiiids” while I worked out. I used #85 for the workout below, and, whoa, it was deceivingly hard! Post-work, I drank a protein shake made with SFH vanilla Recovery. Then, Quinn and I headed out for a morning adventure. We didn’t have Early Intervention, so I wanted to do something fun with him. But when I was searching online on Sunday night, so many things were closed on Monday. Ugh. I mentioned this to a friend at CrossFit, so she suggested The Christmas Place in Abington. Perfect! We drove straight there, but not before swinging by the drive-thru at Marylou’s! I ordered an eggnog iced coffee with milk and, truthfully, it wasn’t as amazing as I remembered from previous years. It was actually pretty watery. Mehhh. I still drank the whole thing. Qman loved The Christmas Place. There was a toy train, soooooo many things to look at… lights! trees! ornaments! And… Nutcrackers! He thought they were the coolest thing ever, so now we are the proud owners of a sparkly (and semi-creepy) Nutcracker. Haha! After our morning adventure, we headed home for lunch. I reheated the final piece of Pizza Shepherd’s Pie, which was a huge hit in our house. I can’t wait to share the recipe on CNC later this week. It’s definitely a winner! I also ate a few bites of Quinn’s tomato soup. My lunch concluded with the other half of Quinn’s glazed donut from the Marylou’s drive-thur. Tis the season! After that, Qman went down for a nap, and I broke out my laptop to work. After a couple of hours, I took a break for a snack, which included two rice cakes (only one pictured) with peanut butter and sliced banana as well as a mug of Dandy Blend with a splash of eggnog. After dinner, we headed out to complete Day 12 of 24 Days of Togetherness: Get in the car and look for Christmas lights. FYI for the local readers: We visited Lilah Lane in Pembroke, and it was amazing! Every house was DECKED OUT for the holidays, and the light show (I’d definitely consider it a “show”) went along to music that you could tune in on the radio. Oh my gosh, we all loved it!! I finished off the night with a small bowl of Peppermint Joe-Joe’s Ice Cream, which is the bomb!! I wish Trader Joe’s had it year-round. It’s pure perfection! Toddler parents: What are your favorite adventures/activities to do with your little one when it’s cold outside?

This is more for the local readers, but thought I’d share… We’re big fans of our local library, but it’s closed on Monday mornings, so we’re going to explore some neighboring towns. We also like the South Shore Natural Science Center, South Shore Children’s Museum (also closed on Mondays), Story Hour at Whole Foods, and Jungle Jake’s (closed Mondays). If you’re on the South Shore, I’d love to hear your favorites. We’re always looking for fun stuff to do!