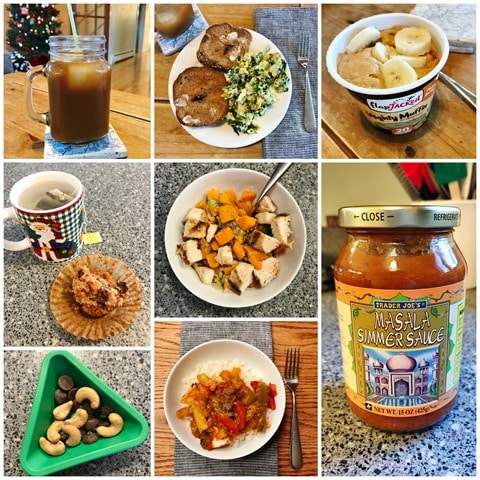 Here’s the next edition of Monday In Meals where I recap what I ate throughout the day on Monday. Ok, here we go! 🙂 Ok, now onto the “dangerous kid toys” part of this blog post…

So, yesterday morning began like many others… breakfast, building forts, chasing Murphy (he’s still a sock monster), and, uh, playing with glitter. (Our couch is quite festive now!) We also spent a good portion of the morning building with Legos. They were actually Mal’s when he was a kid and we found them in his parents’ barn on Thanksgiving, so we brought them home for Quinn. Anyway, when Quinn plays with them now, one of us is always close by supervising since there are so many tiny pieces– not that Qman is putting them in his mouth, but you never know. We played with Quinn’s Legos during his Early Intervention appointment yesterday morning. The specialist and I riffled through them together, and I half-jokingly mentioned all of the small, choking hazard-size pieces. She smiled and agreed (like no big deal), so we continued to play with Quinn. Not 30 seconds later, I spied a bunch of Legos stuck together, but in a weird sort of way. I picked up the clump to get a better look and realized that it was a bunch of tiny magnets stuck to a RUSTY NAIL. Guys, there was literally a rusty nail in Quinn’s “new” set of Legos. Oy. I was actually kind of embarrassed and said to the specialist, something like: “It’s a good thing that I found it before he did.” Umm. I honestly don’t think she cared, but it was awkward for me. #motheroftheyear

After Quinn’s session ended, I sent a WhatsApp message to a couple of my mom friends to recount what happened. I basically sent them the photo above along with a short caption: “Lego safety score: -76.” Then, I explained what happened in a voice message and our conversation moved toward some of the dangerous toys we played with as kids: Lawn darts, Clackers, Snap Bracelets, and Steel Sleds/Saucers (my step-sister actually broke her collarbone on one). Things have definitely changed with regard to toy safety, but I’m pretty sure rusty nails are always considered dangerous, especially to 2 year olds!

Do you remember any dangerous toys from your childhood?