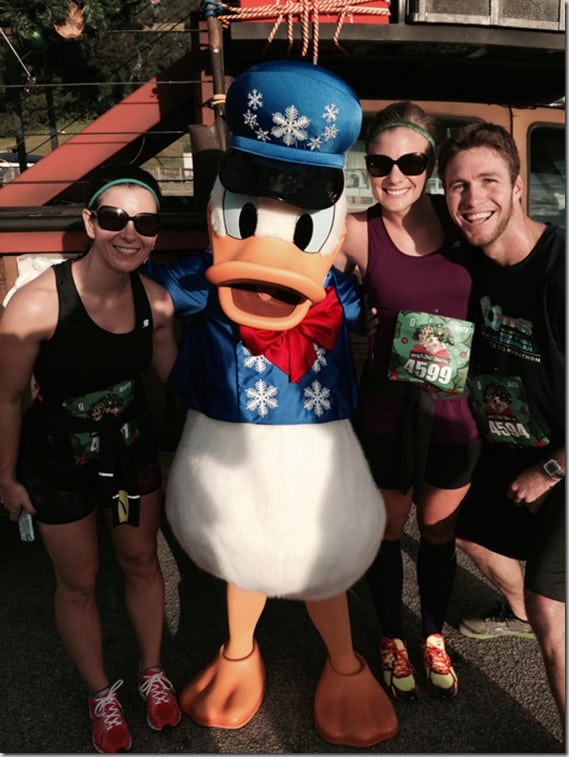 I met our group at 5:30 AM to head over to the start. The sun was just starting to rise when we arrived. Since I attended the race on behalf of New Balance, here’s a quick rundown of my race day outfit: Our group was in the very last coral, so it took us about 10-15 minutes to cross the start line, but it was a fun experience once we got there. There was music, enthusiastic announcers, and fake snow! It was actually my first time seeing fake snow, so I was pretty excited. (Is this how people, who have never seen real snow, feel the first they see it? Haha!) Going into this race, I was told it was one you shouldn’t try to PR because it was just so crowded, so I didn’t have any time goals or expectations, but I didn’t realized just how many people would be racing the course too. Various parts of the course in the Animal Kingdom get really narrow, so we were pretty much shoulder-to-shoulder the entire race. There were also a lot of people walking the race, so it was difficult to run at race pace. My fastest speed was a brisk jog. Even still, I had a great time, especially seeing all of the fun costumes””there was a mix of holiday and character costumes! There was also a number of Disney characters along the route that you could get your picture taken with. We saw a lot of long lines, but they moved quickly. Those Disney photographers are efficient! All in all, Mickey’s Jingle Jungle 5K was a great race. It would be perfect for newbie runners or families with kids, and I think you could definitely race it if you registered early and got yourself in the first coral. After the race, we had a couple of hours to kill, so I went back to my hotel room, showered, and relaxed a little before it was time for brunch. New Balance hosted an epic brunch for us at the Grand Floridian where we stayed for the Disney Wine & Dine Half Marathon Weekend. Seriously, it was an epic meal with all sorts of delicious brunch options! I was wooed by the omelet woman, so I ordered one with all of the fixings. My plate – round one: My plate – round two (also heavenly): What’s your favorite race theme to dress up for?

Are you excited about the holidays or is it still too early?

Would you rather eat a mostly sweet brunch or savory brunch?