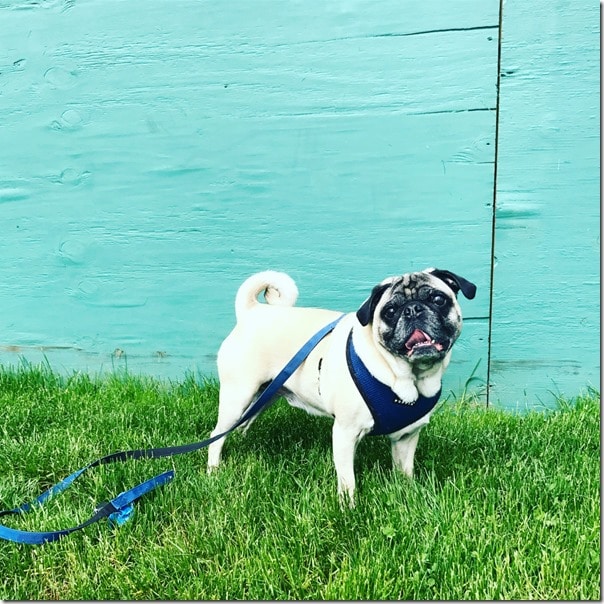 Hey, hey! I hope you guys had a wonderful Memorial Day weekend!

We actually started with no real plans for the long weekend, but then ended up being pretty busy – lots of friends, family, and barbecues!

Our local Orangetheory added a 3:00 PM class to their Friday schedule for the summer, so Mal and I popped in for a fitness “happy hour” before picking Qman up from daycare. It was an awesome workout and, holy cow, were we sweaty by the end. Check out my leggings! Haha! On Saturday, Mal and Quinn were invited to a “boys only” adventure at the zoo. So, I spent the morning with my favorite pug! We had such a nice time exploring Forge Pond Park. Murphy loved all of the sights, sounds, and smells, and I got to listen to my favorite podcast. After our long walk at the park, I dropped Murphy off at home and then headed to downtown Hingham to wander around and pop into some of the adorable little shops. I always drive through on my way to Orangetheory, but never have time to stop, so I made it a point to stroll around. It was lunchtime, and I was starting to get hungry, so I stopped by Square Cafe for lunch. So many people have said good things about it, so I just had to see what it was all about – and it did not disappoint! It’s super cute inside and the food was so fresh and flavorful! After that, I headed home to meet my boys. Qman went down for a nap and then we all headed over to our friends’ house for a barbecue. The boys (both big and little) had such a great time together! 🙂 The next morning, Mal, Quinn, and I went to Lucky Finn Cafe for breakfast. It’s the cutest little coffee shop right on the ocean, and it’s most definitely a family favorite! The coffee was excellent as well as the breakfast sandwiches and croissants. Qman was definitely a fan! 🙂 After our visit to Lucky Finn, we stopped by Hornstra Farms to see the cows. And buy a few treats for a barbecue later that afternoon. We also bought a couple of apple cider donuts to share because the ones at Hornstra are to die for! We also purchased a bottle of strawberry milk to share, which brought me right back to my childhood. We always had Nesquik strawberry in the house, so I drank it like it was my job! Qman actually wanted a sugary, red 40-filled fruit punch drink from Hornstra, so we steered him in the direction of strawberry milk (beet juice for color), and he ended up loving it! 🙂 After our morning adventures, we headed home for nap time. When Qman woke up, we went to our friends’ barbecue where we enjoyed lots of delicious food, including coffee cookie and cookie dough ice cream from Hornstra. I’m not a huge ice cream person (I’d much rather eat a piece of cake or a cookie), but Hornstra‘s ice cream is something else. Holy yum! Monday started bright and early with Memorial Day “Murph,” a CrossFit hero workout in honor of Navy Lieutenant Michael Murphy, who was killed in Afghanistan on June 28th, 2005. It’s a tough workout, and I was actually feeling kind of blah about it since I don’t go to CrossFit all that much anymore and feel like my fitness level has declined quite a bit. But I surprised myself and shaved off 3 minutes from my first (and only) Murph time. Not too shabby! After CrossFit, we (of course) headed to Coffee Shack for donuts and iced coffee. Back at home, we quickly showered and then hopped in the car to drive to my Grammie’s house for her 85th birthday party! Her great-grandchildren had a blast playing with her birthday balloons! They were entertained for hours! After dinner and cake, we said goodbye to Grammie and headed home. What a wonderful weekend!

Anyone else grow up on strawberry milk?

PrevPreviousThe Only Protein Ball Recipe You’ll Ever Need
Next“Is It An Ant?”Next