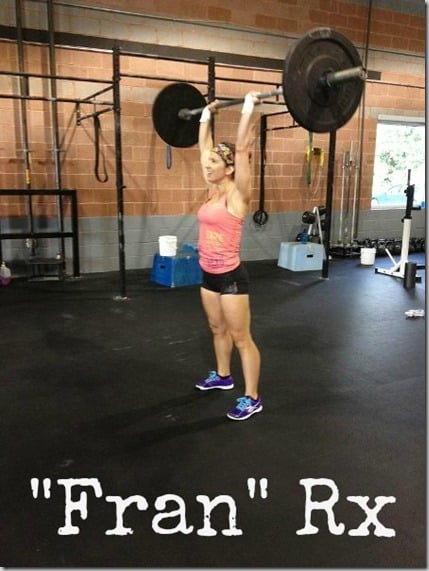 Hi, guys! Happy Monday! Hope you had a wonderful weekend!

I love it when other bloggers recap their workouts for the week. I like seeing what they do for exercise and how they balance their various workouts and incorporate rest days, so I decided to recap last week’s workouts for all of you nice people. I also wanted to recap my most recent achievement, which is actually one of my biggest goals””if not the biggest””for 2013. I’m pretty pumped about it. With that said, here’s a recap of my workouts for last week! This workout was really deceiving. It didn’t seem too bad, but, man, it was rough. My quads were burning, and I was seriously sucking wind by the end of it. The combination of the three exercises just hurt so bad. I was out running my 6th 200 meter when the clock went off, so got 5 rounds + 10 reps. It was an awesome workout, and I actually hope I see it again, which is NOT something I usually say about WODs! Haha! I dunno. For some reason, I liked this one. Do you see where I am going with this?

Friday was “Franday,” which means our box did “Fran.” You may have heard me talk about this workout on CNC a few dozens times in the past. It’s the CrossFit benchmark workout, so it’s a big deal and everyone gets pumped for it. It’s funny to think back to my very first Fran. I was brand new to CrossFit and had no idea what to expect. I scaled the workout””I used #35 for the Thrusters and a #3 band for the pull-ups”” and I still remember finishing Fran and thinking: what the heck just happened? I couldn’t understand how a workout that took me less than 6 minutes to complete, took so much out of me. I also remember thinking there was no way in hell I’d ever be able to Rx Fran. Like never ever. After my first attempt, I actually set a goal for myself to do Fran at Level 1 because I truly thought 65-pound Thrusters and unassisted pull-ups were out of my reach. It took me a year and half to do it, but all of my hard work finally paid off. Those 65-pound Thrusters were nothing! Ok, well, by the round of 9, I wanted to die, but I barely dropped the bar. The pull-ups were more of a struggle, and I ended up doing two at a time toward the end, but I had a string of 11 and 7 on the set of 21, so I was pretty happy about that.

Boy, I’ve come a long way since my first Fran. Check out my progress… just another reason why performance tracking is so important in CrossFit. You can see your gains in black and white! Awesome, right? I’ve been on a high since Friday. I still can’t believe I did it. Now, I want a sub 5-minute Fran! Proud but never satisfied!

Have you achieved any of your goals for 2013 yet?