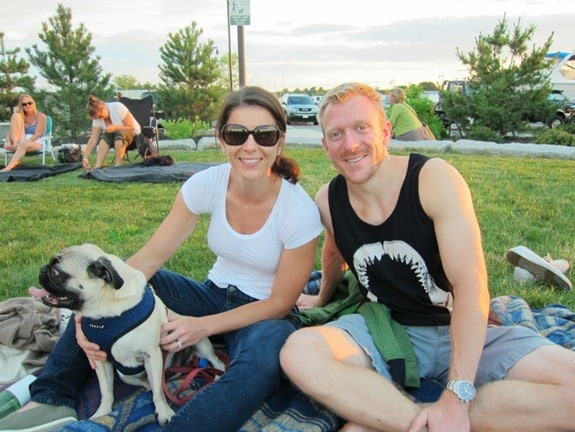 Hi, guys! Let’s get right to it. Fun day to recap!

Our friends Erin and Ping (pug) came to visit bright and early yesterday morning. Erin (and Ping) had already eaten breakfast, so Mal made a couple of bagel egg and cheese sandwiches for us. On the way to our house, Erin offered to pick up Marylou’s for us, so I also enjoyed a delicious Peanut Butter Wonderful Iced Coffee with breakfast. Thanks, Erin! After breakfast, we dillydallied around the house for awhile and then headed to downtown Hingham to explore. After discovering how adorable it was, I added it to my Summer Bucket List as something I wanted to do in the next few months, so I suggested it to Mal and Erin. It was an absolutely beautiful day, so they were game. We wandered around for about an hour””popping into cute shops and window shopping””before getting hungry for lunch. Mal remembered that “Dine at Caffe Tosca” was on my Summer Bucket List, so he suggested it for lunch. Perfect. For lunch, I ordered the Beet Salad, which came with arugula, goat cheese, roasted onions, walnuts, and a citrus vinaigrette on the side. It sounded delicious, but it didn’t have much to it, so I asked for chicken on top. Caffe Tosca was super cute and the food was great– fresh, flavorful, and interesting. I’d definitely dine there again! After lunch, we wandered around downtown Hingham a little more and then stopped into a cafÃ© for iced coffees. (Yes, I know we have an iced coffee “problem.”) I ordered a “French Kiss” iced coffee, which I thought was just iced coffee with caramel flavoring, but it ended up being a total sugar bomb with all sorts of sweet stuff in it. It was actually pretty gross. I didn’t want to waste it since I paid $4 for it, so I brought it home to mix with regular iced coffee to dilute its sweetness. On the drive home, leaving downtown Hingham, I noticed the lines on the road. Red, white, and blue! How cool! At home, Erin and I hung out in the backyard while Mal took a nap. I snacked on some watermelon and drank my iced coffee. A couple of hours later, Mike (Erin’s husband) and our friend Jim arrived at our house. We hung out for a little bit and then the guys fired up the grill for dinner.

While we waited for dinner to cook, Erin and I snacked on some veggies and hummus. On the menu for dinner: burgers, chicken, sausage, Sweet Potato Wedges, and salad. After dinner, we headed to The Launch at the Hingham Shipyard for an outdoor movie. Jaws was playing! So fun! I love sharks, especially Great Whites and Hammerheads, but they also scare the crap out of me. In fact, I won’t go much deeper than my waist when I swim in the ocean because of watching Jaws. As a kid, I’d even get freaked out by lakes and sometimes pools. I thought maybe a shark was hiding in there or something? Drinks for the evening. The movie started at dusk, so we arrived a little before 8:00. We all got comfortable and enjoyed the show. Are there movies from your childhood that still scare you today?