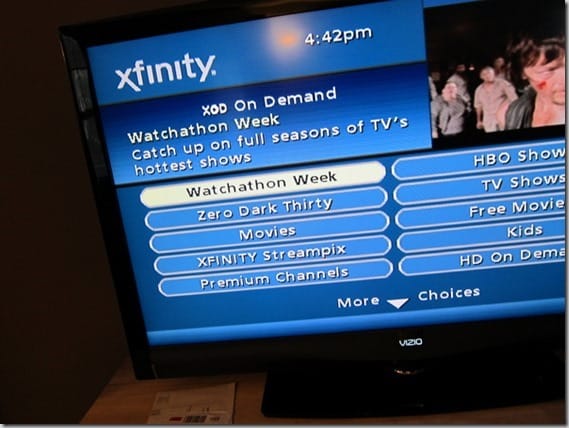 A couple of hours after lunch yesterday, I had a craving for something cold and creamy””specifically, a “Bananas Foster” smoothie, which I’ve made almost every day since I created the recipe for Health.com last week. (FYI: I think it’ll be published next week.) It’s so frickin’ good. It’s basically a dessert smoothie, but the recipe calls for a couple of different flavored extracts, so it’s not crazy-high in calories, but tastes amazing. Obviously, I’m a little obsessed with it. I took my smoothie to go because Murphy and I had places to be and people to see! Smiling seniors = best thing ever. When we got home from visiting, I took Murphy for his afternoon walk and then finished up some work.

It wasn’t quite dinnertime yet, and Mal was at CrossFit and I didn’t want to eat without him, so I snacked on some guacamole and crackers to hold me over. While I snacked, I watched a couple of episodes of Girls. From now until the end of the month, you can watch current or most recent seasons of all sorts of great TV shows, including Game of Thrones, Dexter, Duck Dynasty, Downtown Abbey, Mad Men, The Walking Dead, and Girls. Obviously, I’m going to be very busy for the next few days! At first, Murphy was really into Girls, especially when he saw some puppies in the second episode. Like me, he thinks pug puppies are the cutest! By the third episode, however, he was over it. The drama those girls create is exhausting. When Mal got home from CrossFit, we planned to tackle our newest home project together: Yep, our new fridge doesn’t fit below our cabinet. I guess that’s what happens when you impulsively buy a major kitchen appliance and don’t bother to measure anything. Oops.

Moving the cabinet up a couple of inches actually seems like a pretty easy project, but, unfortunately, our power drill is wussy and couldn’t remove all of the screws. We’re hoping we can borrow our neighbor’s drill or we’ll just buy a more powerful drill tonight. Oh, the fun of owning a home! Haha! Once I realized our fridge-cabinet project wasn’t going to happen, I made dinner for Mal and me. I cooked some extra spaghetti squash on Monday night when we had Chicken Bacon Alfredo, so all I had to do was add some tomato sauce, Trader Joe’s turkey meatballs, and nuke it all in the microwave. Dinner was served in less than 5 minutes! After dinner,  I snacked on some dates and a couple of handfuls of Chocolate Chex. Mal, Murphy, and I spent the rest of the night chilling on the couch, watching TV, and, of course, watching the announcement of Open WOD 13.4. Clean & Jerks at 95 pounds… yikes!

This is a pug burrito. They smell like Fritos. What TV show are you loving right now?

Does your pet ever watch TV?

Is there anything cuter than a pug burrito?

P.S. The code for free shipping (cnc303) on Flip Belts is only good until the end of the month (Saturday). Flip Belts are great for training runs!

PrevPreviousFirst Half Marathon Training Run
NextPreparing for Open WOD 13.4Next