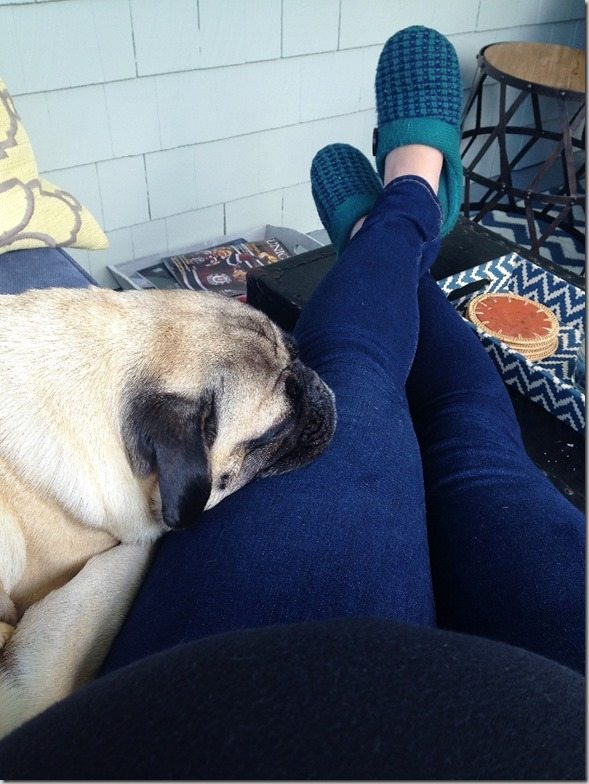 Just popping in to say ”˜hello’ and let you guys know that we’re still waiting for Baby Haupert to make his arrival. I’m still not having any (obvious) signs of labor, but I’m having fun trying to encourage it! (I know babies come when they’re ready!) On Friday night, Mal and I ordered (spicy) Thai food for dinner, hoping it might get things moving. No luck, but, as always, Lime Leaf was delicious! On Friday afternoon, a special package from Julie arrived in the mail for Baby Haupert. Of course, Murphy immediately thought it was for him, so I let him sniff the box. Once he was done sniffing, I started to open the wrapping paper. Murphy was sitting right in front of me, watching me like he usually does, but then he did something totally unlike his usual pug self: He snatched the box out of my hands and ran into the other room with it! Whaaaaattt? Mal and I just stared at each other and then started laughing because Murphy doesn’t typically do stuff like that. It was so random. We found the pug in the living room frantically ripping the wrapping paper off the box. I eventually grabbed the package and opened it myself. And, of course, Murphy wasn’t far from the action. Inside was the most adorable little socks! (I already packed the fish ones for the hospital since they match Baby H.’s going home outfit.) Thank you, Julie! After that (and on more than one occasion), Murphy tried to grab a sock and run off with it. He’s SUCH a sock monster. He’s also in for some big changes once Baby Haupert gets here. It’s not going to be Murphy’s world for much longer! I’m actually not too worried about how Murphy will adjust to the new baby. He’s (mostly) a chill, laid-back dog, who loves just about everyone, so I can see him getting along with Baby H. just fine. I actually think he’s going to be sort of indifferent to him””like Murphy will probably sniff Baby H. and be a little curious, but, overall, I don’t think he’ll be all that interested.

How did your dog react when you brought home a new baby? Any advice for us?