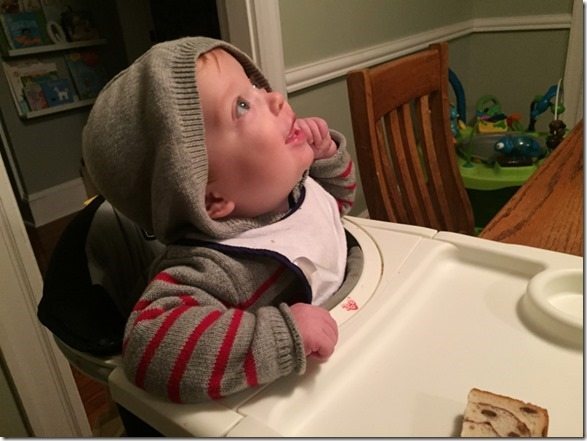 So, our heat went out again last night. We had our furnace serviced just a few weeks ago because of the same issue, but, unfortunately, it went out again. *sigh* (Is it Spring yet? Oh, yea, it is. Is it summer yet? Jeez, Louise. I am so done with this winter-like weather.) I woke up in the middle of the night because I was cold, so I went to turn up the heat. (Mal sometimes turns it down a little bit because he doesn’t like the house too warm when he sleeps.) Usually, the heat starts right up when I adjust the temperature on the thermostat, but it never kicked on. I woke up Mal and he went downstairs to check the furnace. The heat came on for maybe 20 seconds (hooray), but then it went off again (boo). At that point, it was 64 degrees in our house, so I “ninja-ed” into Quinn’s room and put a sweater on him. Miraculously, he didn’t wake up! It was pretty amazing.

When Mal woke up around 5:15 AM, the house was 56 degress (brrrr), so he put a couple of blankets on Quinn and started a space-heater to get us through the early-morning. (We called our heating company as soon as we realized our furnace crapped-out again, but they couldn’t get someone out until the morning.) Quinn slept until about 6:15 and woke up bright-eyed and bushy-tailed. He didn’t care one bit that our house was cold, especially after Dad told him it was “like camping.” Haha! While Quinn ate his breakfast, I ate mine, which was a bowl of sweet potato oatmeal with walnuts, chia seeds, and apple butter. It was originally overnight oats, but I just couldn’t eat cold oats when our house was 56 degrees, so I heated them up. After breakfast, we all hung out in the warm bathroom while Mal got ready for school. Party in the bathroom! Thankfully, it was a daycare day, so I dropped off Quinn, so he would be nice and toasty there and then I swung by Marylou’s for an iced coffee. When I got home, the heat guy was waiting for me. Hooray! Murphy wasn’t sure what to make of the heat guy, but he fixed things right up for us and we’re back in business! Thank goodness! Do you like sleeping in a warm or semi-chilly house?