We took a tour of the Waterbury location and learned all about the history of the company, their social mission, and the ice cream-making process at the factory. The tour concluded in the “FlavoRoom” with samples of a special ice cream flavor made just for tour attendees. How cool is that? It’s a way for Ben & Jerry’s to test out new flavors and get immediate consumer feedback. The flavor that we tried was called “At the ChocoBanana,” which was banana-cinnamon ice cream with brown sugar caramel swirls and chocolate chunks. I didn’t think I’d love a banana-flavored ice cream, but this flavor was awesome. It reminded me of a banana chocolate chip cookie. Everyone in our group raved about it (and hopefully other visitors will too), so I really hope Ben & Jerry’s makes this flavor down the road! We also had the opportunity to taste the new Peanut Butter Fudge Core that was made just minutes before at the factory. Obviously, it was incredible. The peanut butter is more of a salty, savory peanut butter than a sweet one, so it tastes absolutely amazing with the sweet chocolate fudge. 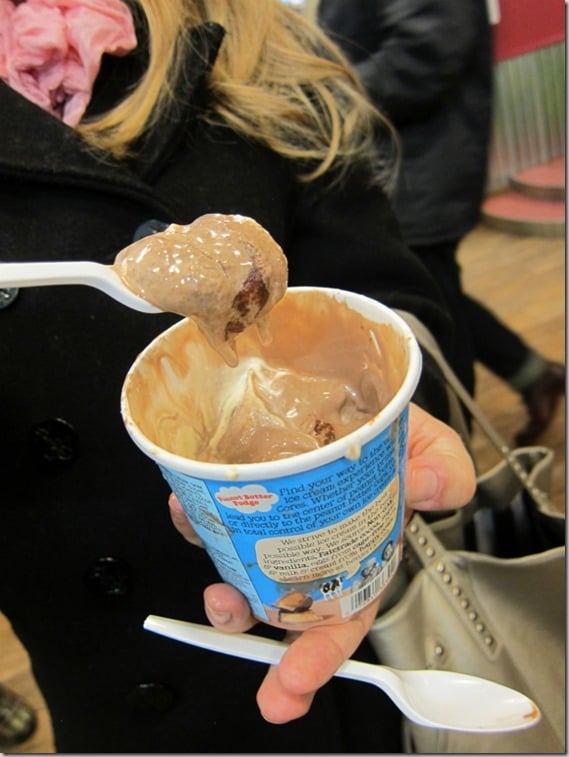 After touring the factory, we headed outside for some snowshoeing! Our group strapped on some snowshoes and headed out for a guided tour in the woods. Good times! It definitely felt good to get moving! (Fat guy in a little coat? Haha! It needs to be spring ASAP. My winter coat barely fits!) After our snow shoeing adventures, we headed back inside to learn more about the quality control practices and procedures at the factory, which was really interesting! Every 30-60 minutes, pints are taken off the line and tested to ensure that they are of the highest quality. The pints are physically cut open and checked to make sure that there are no spaces where the ice cream didn’t fill and all of the ingredients (i.e. core, chocolate chunks, swirls) are visually where they are suppose to be. If the pints aren’t perfect, they’re donated or given away to employees.

It was really cool to hear how much pride the factory workers take in their product. There was no way a less-than-perfect pint was going out the door on their watch! Ben & Jerry’s is also really serious about consumer feedback. In the past, they’ve made changes to flavors because of customer complaints. For instance, Ben & Jerry’s added more cherries to Cherry Garcia and worked with their pistachio supplier to have better-tasting (less burnt) pistachios in their Pistachio Pistachio flavor. Similarly, Ben & Jerry’s received a number of complaints about their Half Baked ice cream not being swirled enough, so they reformulated the product to make it an even better one! I loved hearing these examples. It definitely shows how much Ben & Jerry’s cares about their customers. After that, we had a chance to try all four Core flavors. Of course, I loved them all, but the Hazed & Confused and Salted Caramel were definitely my favorites! Before we left the factory, I picked out a fun onesie for Baby Haupert. He’s going to look so hip this summer! We also stopped by the Flavor Graveyard to pay our respects to the retired flavors. Then, we headed to dinner where we were surprised with two very special guests: Ben Cohen and Jerry Greenfield, THE Ben & Jerry. (Yes, they typically stand with Ben on the left and Jerry on the right. We asked!) It was so cool to meet these guys live and in person, especially after hearing so much about them for the previous two days. Fun facts about Ben and Jerry:

Ben and Jerry didn’t stay for dinner, but Ben took some time to tell us about his newest endeavor called “Stamp Stampede,” where he’s working to literally stamp money out of politics with a dollar-stamping campaign. You can read more about it and how to get involved on the Stamp Stampede website. The evening concluded with an epic, locally-sourced, three-course meal and lots of great conversation and tons of laughs. The group of bloggers that was chosen for this trip was one of the best I have ever spent time with. I loved everyone that I met, and I know we’ll definitely keep in touch via the Interwebs. All in all, I had an absolutely wonderful time on this trip. Ben & Jerry’s is definitely a special company with some really special people who work there. Pretty much everyone I met had long careers with the brand (12, 15, 26 years of service) and really, truly seemed to love their jobs. It was so nice to interact with people who take so much pride in what they do and the social causes that they support.

Learning so much about Ben & Jerry’s as a brand made me want to buy their product even more. Of course, their ice cream is delicious, but now I want to support the company too. Well, hey, it’s Friday… I might need to buy myself a little treat this afternoon! Hmm… now what flavor do I choose?