I Did A 3-Day Juice Cleanse 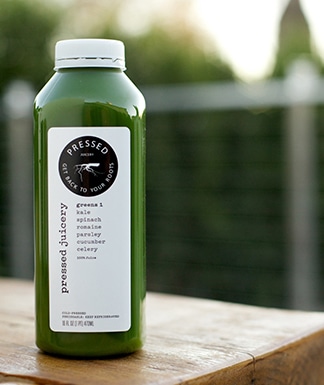 Did you happen to notice that I didn’t blog about my food on Thursday, Friday, or Saturday of last week? Well, it’s because I did a 3-day juice cleanse.

Say whaaat? Yep, that’s right. I did a 3-day juice cleanse. I bet you’re wondering WHY? Well, there are a few reasons:

When Kerrie asked me to join her, she had a very specific juice cleanse in mind. Someone told her about the Pressed Juicery in California, so she read up on how it works on the website and told me all about it. It sounded pretty cool, so we planned to do a 3-day juice cleanse last week. Throughout the cleansing process, I took notes on how I was feeling, so I could share my experience on CNC, so, without further ado, here’s how my 3-day juice cleanse went. (FYI: I have zero connection to the Pressed Juicery. I decided to do this juice cleanse totally on my own and this post is not sponsored by the company in any way.) When I got home from Ireland, I ordered the 3-day juice cleanse from the Pressed Juicery (I did Cleanse 2) and gave myself three days to prep my system before I started it. In order to get the best “detoxifying results” from the cleanse, the Pressed Juicery recommends that you “wean yourself off of some of your usual indulgences,” including:

I ended up eating several bites of chicken on Monday, but only because I forgot about the pre-cleanse. Oops! The Pressed Juicery website said if you really feel like you need some animal protein, it’s okay to eat a little as long as it’s organic, so I didn’t worry about it and just didn’t eat meat after that. I wasn’t super strict with the pre-cleanse since I already eat pretty well, but I have to admit, I’m surprised I didn’t miss meat all that much. I thought I would be starving without protein, but I really wasn’t.

Of course, I woke up hungry on the first day of the cleanse. The juices were supposed to be delivered to my house that morning, so I drank some water and got to work as a way to distract myself. Hours and hours passed and my stomach was grumbling like crazy, so I finally broke down and ate a banana. I was miserable, so I ate something and then justified that my juice cleanse would start after eating the banana.

At 10:00, my juice for the next three days finally arrived. Hooray! Inside the box was six juices for each day, which you selected online when you ordered, as well as a bottle of aloe water. There was also an option to have a bottle of chlorophyll water each day, but I saved my money and passed on it. I heard aloe is great for healing the colon, so I ordered those along with the juices. (It was an extra cost.) Here are the six juices I choose for my cleanse:

I lovvvvvved all of the juices, except for the Roots 1, which was just too beet-y for my liking. I had no problem drinking it, but it just wasn’t my favorite. The other five juices were awesome, and I really want to recreate them at home in my own juicer, specifically Citrus 2 (pineapple, green apple, lemon, and mint), which was easily my favorite juice of the bunch. I actually bought a mint plant the other day, so I can have fresh mint in my juice when I make it! My first juice of the day was a delicious blend of kale, spinach, romaine, parsley, cucumber, celery, apple, lemon, and ginger, which was a lot like the green juice I make at home. It tasted great, and I was hungry, so I chugged it down. Since my juice arrived so late in the morning and you’re supposed to drink a bottle every two hours or so, I started on my second bottle of juice about an hour later. By the time I got to the third bottle around lunchtime, I felt really good, and my hunger finally went away.

I kept busy that afternoon (working, blogging, cleaning the house), so I didn’t really think about food. When dinnertime rolled around, I wanted to eat, but I still had two more juices to drink, so I sipped them slowly and enjoyed my evening. The final juice of the day was made with almond milk, so it was a lot more substantial and filled my stomach before heading to bed. It was also really tasty! Yay, I made it through Day 1!

I woke up before my alarm went off feeling totally refreshed and rejuvenated. I also really had to pee from drinking all of that liquid the day before, so I was up and at ’em. You’re also suppose to drink water throughout the day during the juice cleanse, so there were a lot of trips to the bathroom. Anyway, I was excited to start Day 2.

After I drank my first juice, I headed to a yoga class. The Pressed Juicery recommends toning down your usual exercise regimen and keeping cardio to a minimum, so I only did one yoga class and took Murphy for a couple of long walks during my juice cleanse. After yoga, I ran some errands and then headed home to drink my second juice of the day. At this point, I felt really great. I was all zen after yoga and wasn’t very hungry. Well, a few hours later, things quickly changed… for the worse.

Around 3:00 PM, I started to crave solid food in a major way. Mal had just gotten home from school and was looking for something in the kitchen to snack on. I saw him munching on chips, and I really wanted to eat some. At this point, my hunger took over, almost to the point of “hangry” (hungry + angry), and I seriously considered quitting the cleanse and ordering Lime Leaf for dinner. I whined to Mal that I didn’t want to do the cleanse anymore, but he gave me a pep talk and eventually talked me off the ledge. Even after this words of encouragement, I was still pretty miserable, so I ate a couple of bites of guacamole and then grabbed the almond milk to drink early since it had some substance to it. Thankfully, it actually made me feel quite a bit better, and I was able to make it through the rest of the night with the final two juices and not wanting to quit. Day 2 done!

Day 3 was by far the easiest day of the cleanse for me – probably because my body was getting used to drinking only juice, but also because I was super busy getting ready for my sister’s shower and didn’t have much time to think about food.

I drank my first three juices (two hours apart) before lunchtime. I ran around all afternoon long (running errands and setting up for the shower), so I didn’t break into juice #4 until almost dinnertime, which meant I still had two more juices to go. Drinking three juices over the course of 4-5 hours kept my stomach happy and my hunger at bay until I headed to bed. Knowing that I was in the home stretch of the juice cleanse also made it easier to finish.

Pressed Juicery sent me an automated email with a recommended meal plan for the three days following my cleanse to help me slowly reintroduce certain foods back into my diet. The first day was all fruits and veggies, the second day was fruit and veggies with some whole grains mixed in, and, on the third day, you reintroduce meat and dairy. My sister’s shower was the day after I finished the juice cleanse, so I totally dropped the ball on following the meal plan from the Pressed Juicery. Enjoying the delicious brunch spread at my sister’s shower was totally worth it though. Now that it’s Monday, I am eating healthy, but not sticking to the Pressed Juicery diet.

The Good & The Bad

Ok, now that you’ve read all about my juice cleanse experience, here are some of the good and bad things about it.

Overall, my juice cleanse was a positive experience, but I’m not sure it really did anything (besides motivate me to stay on a healthy track). I felt great the day after the cleanse ended, but I didn’t feel amazing like I thought I might after a 3-day juice cleanse. I noticed that I slept really well the last few nights and woke up feeling especially refreshed and well-rested, but, other than that, I didn’t notice anything else physically.

I’m glad I tried a juice cleanse to see what it was all about, and, hopefully, it gave my colon a little time to rest and heal, but I don’t see myself doing another one anytime soon. I will, however, be drinking plenty of fresh juice. I really loved the Pressed Juicery juices, and they inspired me to experiment with my juicer at home. I’ll be sure to share the juice recipes that I come up with!

Have you ever tried a juice cleanse? If so, what was your experience? If not, is it something you would try?