I Bribe My Dog to Run with Me 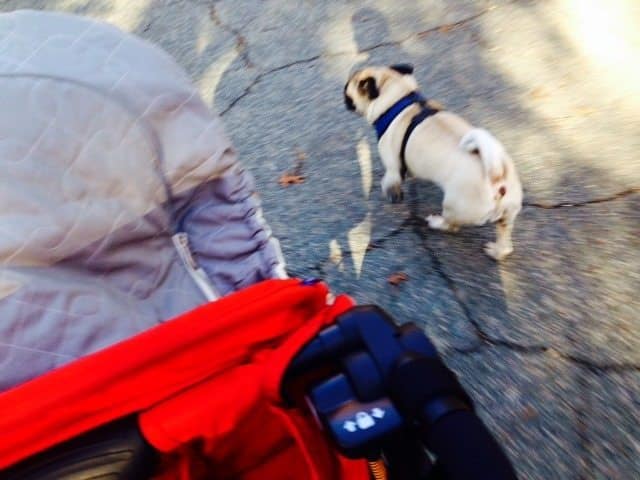 Yesterday started bright and early at 4:30 AM once again. Mal offered to get up with Quinn since his alarm usually goes off at 5:15 AM for school, but I couldn’t fall back to sleep, so I got up and hung out. And Mal offered to make me breakfast, so, yea… food. Mal left for school. Quinn and I played. We sang. We read books. I watched the news. I drank iced coffee. I tried to do work.

When the mid-morning rolled around and the weather warmed up a little, I got us ready for a trip to the dog park with Murphy. I usually pack dog treats to help keep the pug’s attention when he’s off-leash at the park, but I forgot them this time. Fail. I really wanted to run with the stroller and I knew Murphy would only half listen to me if I didn’t have treats, so I swung by CVS to buy some. I also needed (yes, needed) to buy some dark chocolate covered cashews while I was there. I am obsessed. After that, I drove to Bare Cove Park with Quinn and Murphy, broke out the jogging stroller, and off we went! Bribing Murphy with the treats worked really well. He stayed right with me and trotted along behind the stroller. We ended up doing 2.5 miles, which was mostly running with only a few brief stops to walk and regroup. (Murphy got distracted by other dogs, people, and smells on occasion.) After the park, I ate second breakfast, which was overnight oats made with Greek yogurt, raspberries, chia seeds, sliced almonds, and almond milk. Delish! And then a couple of hours later, I finished off some leftovers from the previous night’s dinner: pasta with roasted broccoli, edamame, garlic, and crumbled feta. And, of course, I broke into the dark chocolate covered cashews and ate approximately 800 of them. A few hours later, I ate an afternoon snack: Baked potato with Light Creamy Swiss from The Laughing Cow. Mmm… it was pure comfort food. At the park, I ran 2.5 miles, which seemed like a good distance, especially since I had Murphy with me, but what I’ve really been digging lately is running for time instead of distance.

Last Friday, I headed out to do a 70-minute run and it could not have gone any better. After having such a bad flare (and basically bleeding to death/dying for more than a week), I wasn’t sure how things would go, but I ran the entire time. It was awesome and it made me so happy. I also think mentally preparing myself to run for 70 minutes instead of 7-8 miles made it seem much more manageable. At one point, I couldn’t remember if I had run 5 or 6 miles, but it didn’t really matter because I knew my goal was 70 minutes and if I needed to walk I could, no big deal. This way of thinking definitely helped me get through it! Would you rather run for time or distance?

PrevPrevious9 Workouts To Do During Naptime
NextNo Eggnog at Starbucks This Year?!?Next