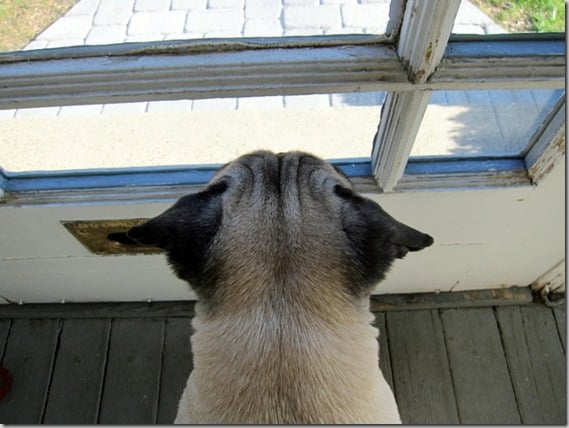 Some of my favorite posts to write on CNC are the ones I call “I Bet You Didn’t Know.” If you’re not familiar with them, here are the ones I’ve written so far:

In these posts, I share all kinds of random stuff about my life with you guys (and I hope you find them entertaining). I was going to write another one, but I thought a post about Murphy would be much more fun. Enjoy!

Murphy hates birds, especially if they are on TV””outside he barely notices them””but if he hears chirping or squawking on the television, he bugs out and barks like crazy. And it’s very angry/annoyed barking”” you can tell he really doesn’t like them (or the sounds they make). I asked Murphy what he has against birds, and he told me he doesn’t trust any animal with hollow bones. Ahh, good point, Murph. Murphy is obsessed with sitting ON laps.

Murphy has a one-track (pug) mind when it comes to sitting on people’s laps. He’s truly obsessed with it. If someone is sitting down, Murphy needs to sit on their lap and does everything in his power to make it happen. It’s like it’s his life goal or something. Plain and simple, Murphy hates drama. He won’t even watch Girls with me. Murphy is a great listener.

Murphy is such a great listener. I’ll go on and on about a problem I’m having or something that’s really upsetting me, and he’ll just sit there and listen until I feel better. He’s also a really good cuddlier so that helps too.

I really wish Murphy could talk sometimes. I feel like he’d give really great advice too. Pugs are wise little creatures. When Murphy wants to go outside or simply through a door, he puts his little pug head super close (almost touching) to the door and stands completely still until either Mal or I open it for him. It’s really weird, but I guess his “Jedi mind tricks” work because it gets us to open the door for him. What’s something strange/unusual/funny that your pet does?

P.S. CrossFit friends, you will LOVE this Tumbler site: This CrossFitting Life. It is hilarious!