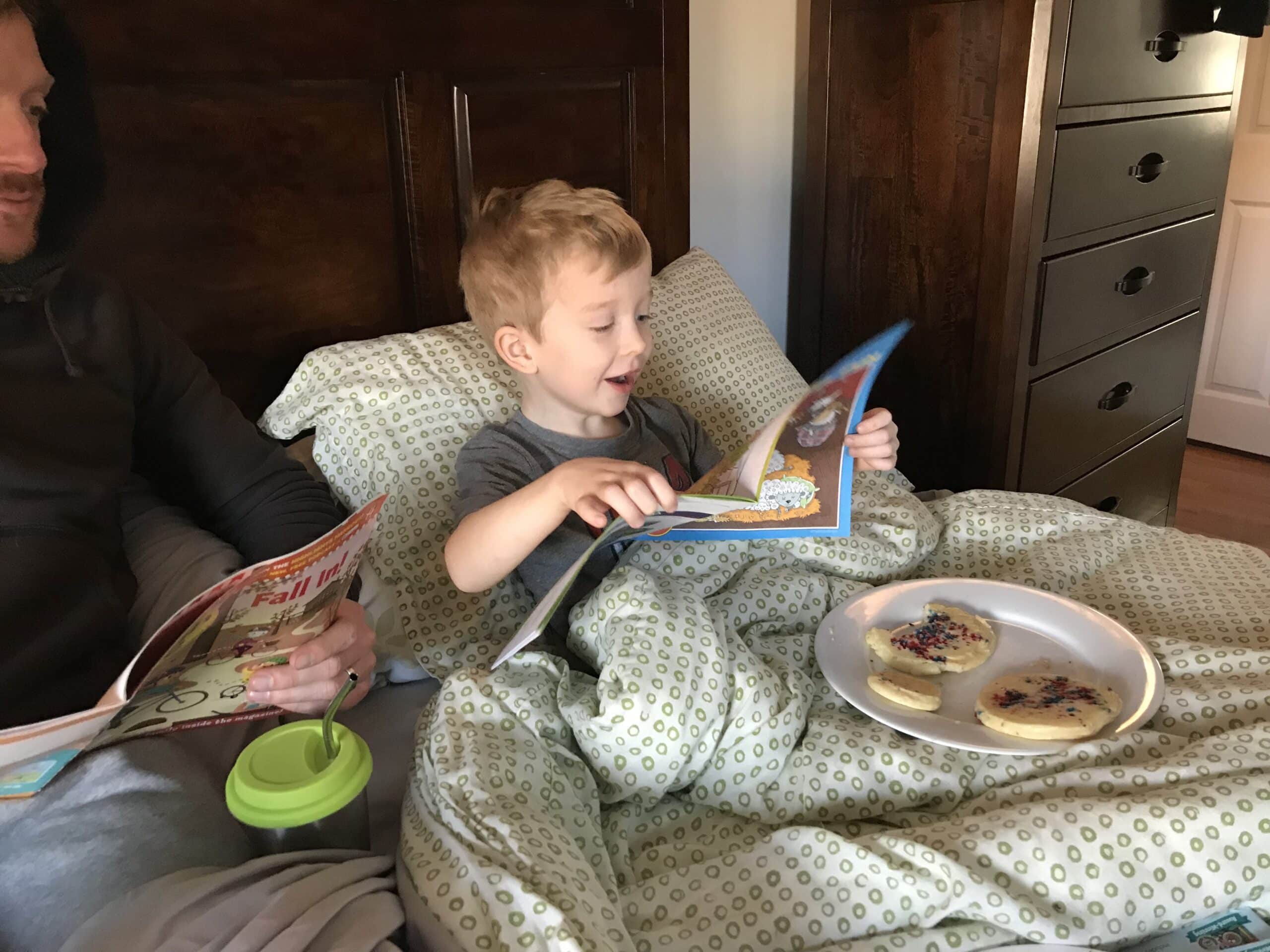 Happy Monday! I hope you had a lovely weekend. Ours was jam-packed on Saturday, but fairly low-key on Sunday, which was much-needed. I’ve been battling a nasty head cold (and I honestly didn’t think a single human could sneeze so much in 24 hours), so I’m glad that we just hung around the house yesterday – for the most part. You might have seen a video on Instagram Stories about our Trader Joe’s grocery haul. But, other than that, we didn’t do all that much. Anyway, I wanted to share a quick recap from our weekend, so here we go!

We were up and at ’em on Saturday morning. Quinn really loves waking up before the sunrise! I mean, I really do love his ” go get ’em” attitude, but Mumma would love to sleep later than 5:30 AM at least every once in awhile! Ha!

Once Mal was awake and we were ready for the day, we headed to the YMCA for a workout and playtime for Quinn in the kids’ room. After that, we went straight to soccer and then CAVA for lunch. The Hauperts are seriously lovvvvving CAVA lately! 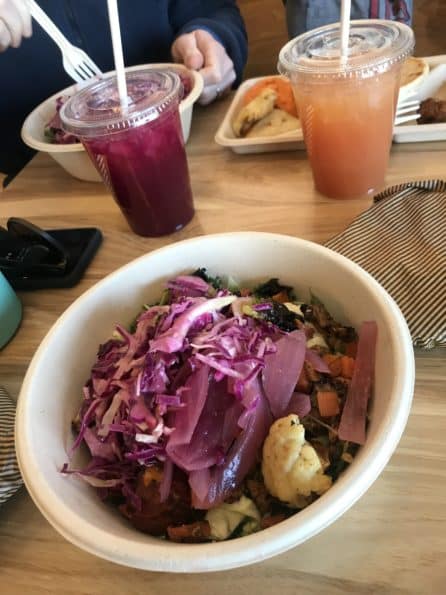 And Quinn at a few bites of falafel at CAVA! We told him in was a “hummus ball” since he loves hummus so much, and he didn’t even hesitate. Woohoo! New food! 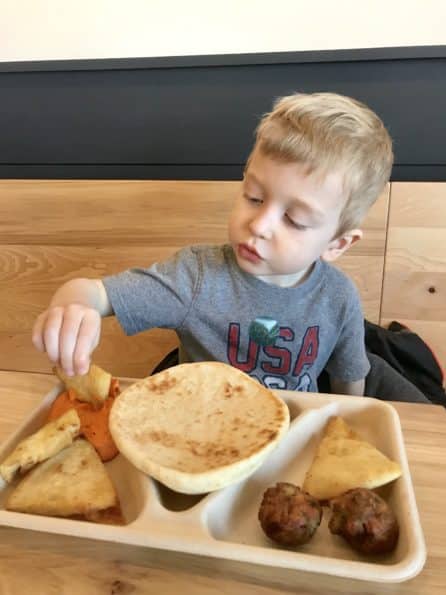 After lunch, we headed to a birthday party at Juniko, which was quite the cool place. I’ve driven by a zillion times (it’s right on route 53), but never stopped in. They teach all sorts of fitness classes, including martial arts, aerial yoga, and more. I heard their Little Warriors class is great for kids! Anyway, the birthday party was A LOT of fun, and Quinn had THE BEST time! 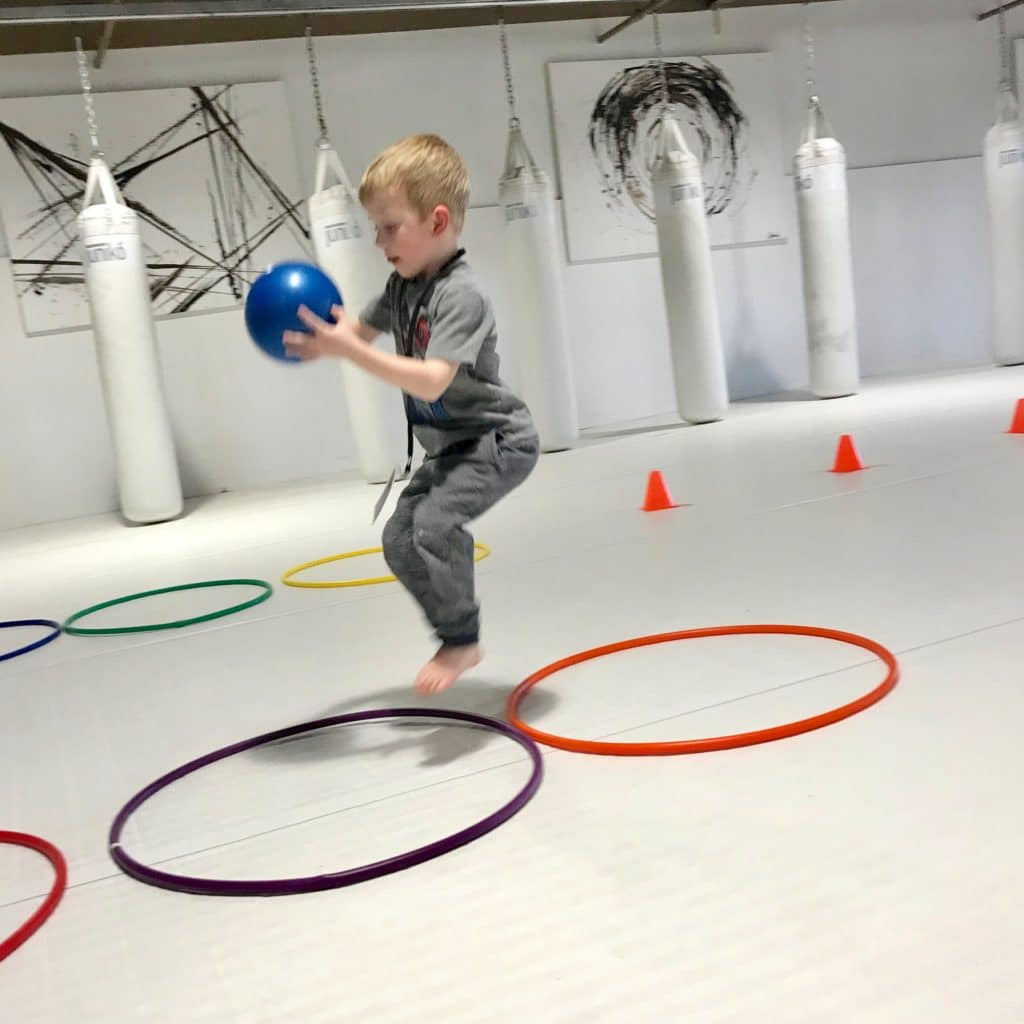 After quite a busy start to our day, we headed home for some downtime. We attempted nap time with Quinn, but it was a no-go. He ran around at soccer and Juniko, so I’m surprised he didn’t sleep at least for a little bit. I know I was ready for a nap! But we were out the door about an hour later for a playdate and dinner at our friends’ house. 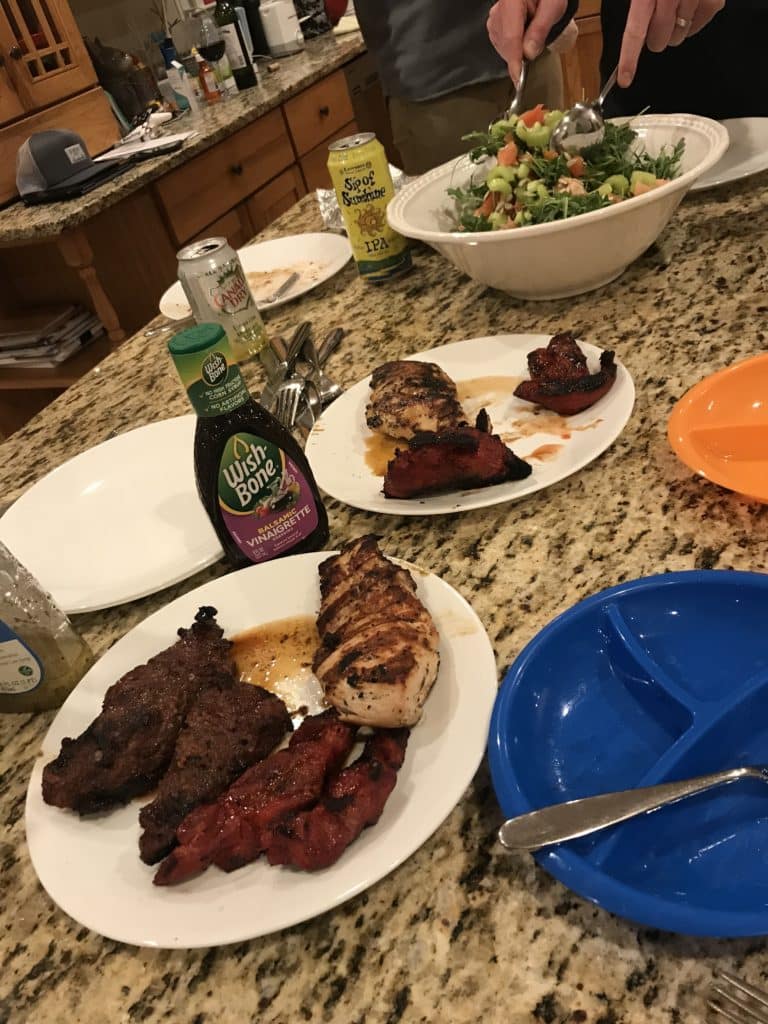 We had a great time at our friends’ house (so many laughs!!), but after a few glasses of wine and a snuffy nose that just wouldn’t let up, all I wanted to do was sleep. But knowing Quinn’s track record with waking up early, I knew I wasn’t going to get all that much.

Thankfully, my girlfriend came to the rescue with the best idea ever. She told Quinn if he stayed in bed until his clock lit up, he would get a prize. She even hooked me up with plastic bug (pictured below) to give him in the morning! We tried a reward system with Quinn’s clock back when we first got it for him, but he always told us it was “broken.” The prize, especially coming from someone else, was exactly what we (I) needed to sleep in until 7:00 AM. It was truly glorious! And, of course, Quinn was psyched for his prize! 🙂 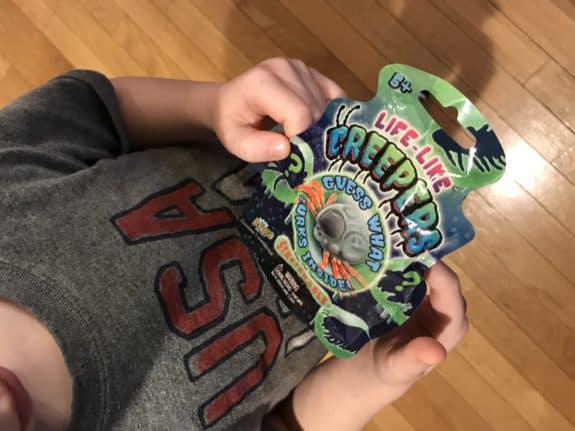 After that, we enjoyed a slow morning – complete with eating pancakes and reading magazines in bed! 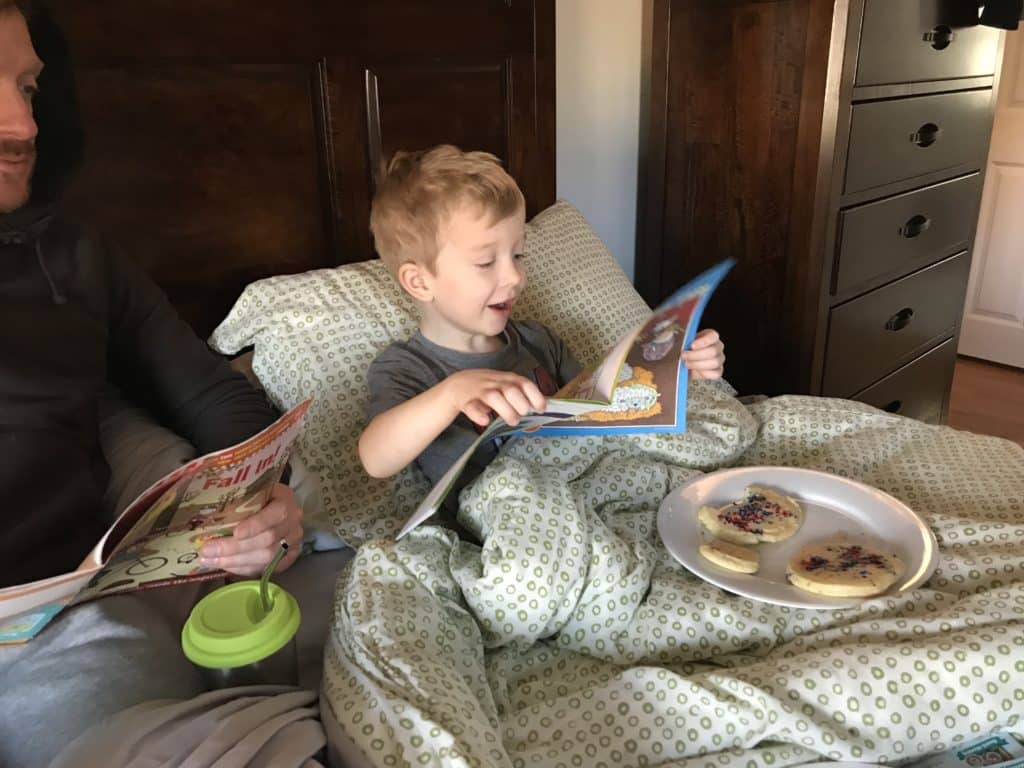 It was actually Quinn’s idea and ended up being so fun, we want to make it a regular Sunday morning activity! 🙂 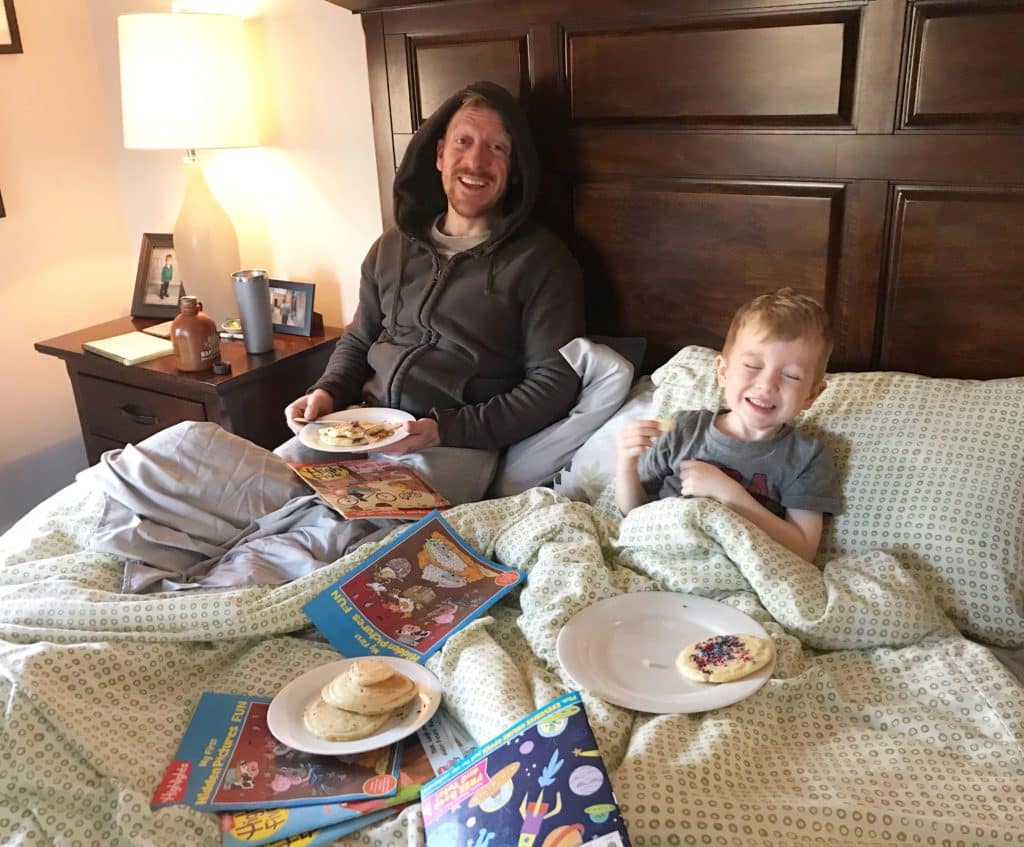 How (the heck) do you get your kids to stay in bed until a reasonable hour of the morning?