How Is Murphy Adjusting to the Baby? 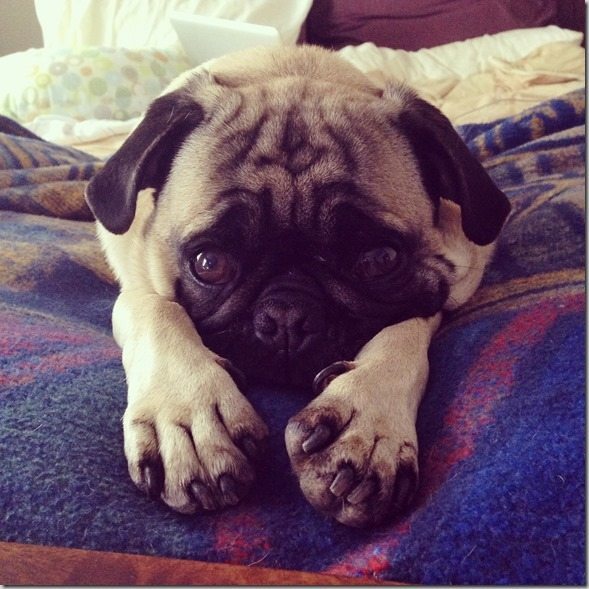 That’s the question on everyone’s mind! And I love how concerned people are with our little puglet’s well-being now that he’s a big brother and sharing our attention with baby Q. Overall, Murphy is doing quite well. When we first came home from the hospital, things were a little rocky, but he’s slowly but surely starting to act like his usual pug-self again.

At first, Murphy really didn’t know what to think about the situation and his new baby brother. When we arrived home from the hospital, we let Murphy sniff Q’s hat and then introduced the two of them. Murphy gave Q a big, long sniff and then licked the back of his head, which I assume meant they were cool. Over the next few days, however, Murphy acted really standoff-ish. I assume he was probably jealous or just unsure how to act because he kept his distance from us. (He also didn’t like Q’s crying.) Before welcoming Q into our family, Murphy always wanted to be with us… sitting on our laps, laying next to us, following us around the house… basically, he was up in our ish all the time. But, once Q arrived, Murphy stopped trying for our attention all the time. Instead, he kept his distance (usually laying down on the ground near us) and sort of seemed to pout (or at least looked really sad and pathetic). One night before bed, Murphy curled up in a ball all by himself on the floor instead of hopping in the middle of the bed like he usually does. It was actually really sad and broke my heart, so I ended up scooping him up and bringing him to bed with us. Play with me, Dad! That little creature sure takes up a lot of your time. Of course, with a newborn, it hasn’t been all that easy to give Murphy our undivided attention, but Mal and I are really trying to give him as much love and attention as possible because we want him to know that he is still a big part of our family. For instance, when Murphy greets us at the door with one of his toys now, we make a huge deal about it and then play with him for a few minutes. We also take every opportunity to cuddle the crap out of him when aren’t busy with Q. Usually, when one of us has the baby, the other person is hanging out with Murphy. Basically, we just love the heck out of the pug and hope that he adjusts to the new family dynamic. It’s been about two weeks since Q’s arrival, and I can’t say Murphy is 100% back to his usual self, but he’s probably at 90% or so. He isn’t as relentless with his quest for lap domination, but the rest of his pug ways are pretty much back to normal. His mood has seemed to improve and he’s not as pout-y anymore. With time, I know Murphy will figure out where he fits within our family. Things won’t ever be like they used to be, but Murphy is doing a great job adjusting to his new role as pug brother. He seems to really respect the space around Q (he never tries to climb on him or anything like that), so his relationship with us and the baby is already starting to develop. Murphy hasn’t showed any kind of aggression toward Q (and I don’t think he ever will; it’s just not Murphy’s style), so that’s not something we worry about. I just think it’s a matter of time before he’s completely comfortable with the situation. And, of course, once Q starts dropping his food and feeding Murphy, baby and pug will be best buds! Moms and dads: How did your dog adjust to life with a baby?