How I got rid of my Entyvio cough 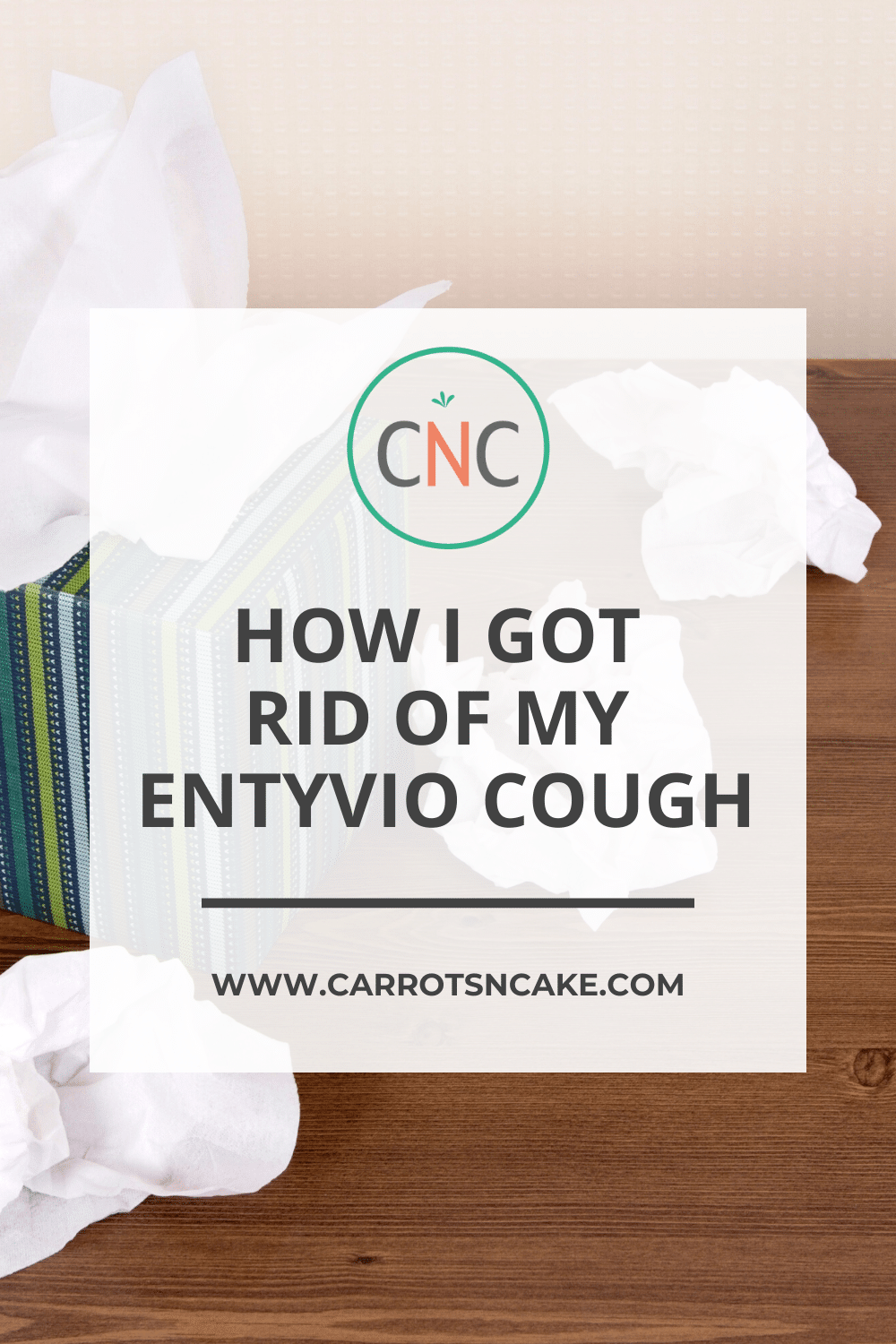 I wanted to pop on here today and talk about my gross Entyvio cough and how I got rid of it. I have ulcerative colitis and have been taking Entyvio for years now, so I always wonder if the cough was related to the drug or the disease. So many of you guys have asked for updates about my cough. Thank you so much for asking. I really appreciate it.

So this mucus-y cough was never-ending. So if you’re not familiar with my phlegm-tactic cough, here goes…

Did Entyvio cause my cough?

Four and a half years ago, this cough developed. It was shortly after we moved to our current house and shortly after I started Entyvio. At first, it was just kind of a tickle in my throat and a little bit mucus-y, but it wasn’t a big deal. We had moved to a new house, and I had started Entyvio, so I thought: “Is it the new house? Could we have mold or maybe I’m allergic to the trees outside? Or is it a side effect of Entyvio?” I had no idea, but where did this cough come from?

In the beginning, the cough wasn’t that big of a deal. It just didn’t really bother me, so I didn’t do much about it. Then, I was on a trip with Brooks Running. We were in New Mexico on a trail run. I was running along, and I coughed into my hand. I had my jacket kind of pulled over my hands because it was cold outside, and, this is gross, but all this mucus came out of my mouth. I was like, “Oh, my gosh. This cough has gotten so disgusting.” This happened probably a good year or two after the cough started, so it was definitely to a point where it was really disgusting and something needed to be done. After that, I was pretty much coughing up mucus every single morning, sometimes multiple times. It just got really, really bad.

Possible side effect of Entyvio

I initially went to my GI doctor and asked if it was a side effect of Entyvio. Of course, he referred me to my primary care doctor. Initially, she thought it was an infection, so we did a round of antibiotics, which did not help the situation (i.e. wrecked my gut). The antibiotics didn’t help and the cough was still there. Then, my primary care doctor prescribed me an inhaler. I started taking it, but I knew it was just masking the problem. Obviously, there was a bigger issue, and I didn’t want to just take an inhaler for the rest of my life.

My primary care doctor referred me to a pulmonary doctor at Brigham & Women’s Hospital. Her name was Elizabeth Gay, and she’s an amazing doctor. She’s probably one of the best doctors I’ve ever had. She was just so responsive, super smart, explains things versus blowing you off, and she really made such an effort to get me better.

I started working with Dr. Gay, and she tested me for everything under the sun. I probably gave 30 vials of blood over the course of our time together. It probably took a good six months between doctor’s appointments, labs, test, etc. I did a couple of CT scans with her and we even ended up doing a bronchoscopy where I was sedated and water was put down my esophagus into my lungs in order to take biopsies. But every time we would get the results back, the results would basically say, “You’re fine. There’s nothing wrong with you.” Dr. Gay couldn’t find anything wrong with me. Everything came back negative, no helpful information. And all that time, I was just hacking up phlegm at CrossFit. Blah.

Dr. Gay really tried everything, but it finally got to the point where she was just like, “Take an inhaler.” Whomp whomp. At that point, I was so sick of coughing up phlegm, I finally committed to the inhaler. I used it for 6 weeks and the cough went away. I was happy that something finally worked, but a month later, the cough and mucus were back.

The cough came back even worse. There was so much more mucus, and it was just so gross. Around the same time, I started working with a functional registered dietician. We were focusing on ulcerative colitis because I was in a minor flare at the time.

She tested me for Candida, so I had an issue with yeast overgrowth. I was doing a protocol, which includes a diet. Then, we got to the point where she suggested doing a Diflucan protocol. At the same time, I was still kind of in touch with Dr. Gay since the cough had come back. She wanted to do more testing, which included a sputum sample. Basically, a sample of mucus, which I had done a million times in the past, but, this time, I couldn’t produce any. I was taking Diflucan at the same time, and it was really, really hard for me to give a sample.

I thought there might be connection, so I asked Dr. Gay about it. She thought it could be a fungus, so we did more testing. I finished the Diflucan protocol, and things got better on the UC front. There was definitely something going on with Candida! The cough, of course, came back after I stopped taking the Diflucan. I was able to give samples and one of them came back with a “trace amount” of fungus.

After years of testing, I finally got some answers. Dr. Gay prescribed me a 28-day protocol of Diflucan and the cough went away!! All of this happened back in January, so, knock on wood, it stays away!

The moral of the story: Don’t give up on your health. I could have given up when I was told to take an inhaler for the rest of my life. You need to be an advocate for yourself and keep pushing. Find doctors that give a shit about you. If they blow you off, it’s time for another doctor. Obviously, I had to put some pieces together and do some work on my part, but, once we got there, the solution was easy. I mean, Diflucan is like $5 and so easy to get.

If you’re struggling with a forever Entyvio cough, it could potentially be related to yeast or fungus. Having IBD makes you more susceptible. Obviously, I’m not a doctor and this is my own personal experience, but it’s definitely something to bring up with your practitioner if you’re dealing with something similar.

PrevPreviousCan you lose fat and gain muscle at the same time?
NextHow to Track Alcohol MacrosNext