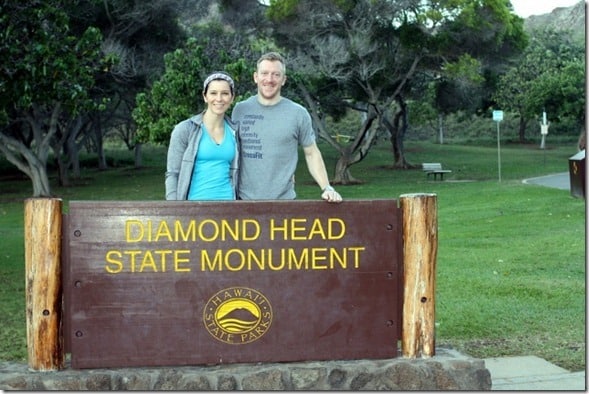 I still can’t believe we’re on Hawaii. This is seriously a trip of a lifetime, and I am forever thankful to Oahu’s Visitor Bureau for making it possible. Ahhh! I am so excited for the next few days””we have quite the agenda!

I woke up around 4:00 AM this morning and could not get back to sleep for the life of me, so I got up and did some blogging in the lobby of the hotel. Around 5:45 AM, I bought a couple of iced coffees and bananas for Mal and me. I was pumped to carpe diem, so I figured iced coffee would make persuading Mal to wake up at that hour a little bit easier. It worked because he wasn’t annoyed at all. I guess he was pretty psyched about getting our day started too! And, ok, his body was still on EST time, it was almost 11:00 AM. Once we got dressed and ready to go, Mal and I drove to Diamond Head, a massive volcanic cone on the coastline of Waikiki. Some quick facts: including the interior and outer slopes, the crater encompasses over 475 acres, and it was formed about 300,000 years ago during an explosive eruption. We heard Diamond Head gets pretty busy around mid-morning, so Mal and I arrived around 7:00 AM to beat the crowds. It ended up being a great decision because we were able to speed right up to the top. (FYI: The entrance fee to the parking lot at Diamond Head is $5 per car and only cash is accepted.) The hike to the summit was about 0.8 miles. The trail was quite steep at parts, and Mal and I started to break a sweat toward the top. For the hike, I wore some new workout gear from Reebok:

Let’s talk about the RealFlex Scream 2.0 first since I am totally obsessed with them. I love, love, love the colors and funky design, and they were super comfy during the hike this morning””lightweight and flexible. In addition to my workouts, I’ve also been wearing them as “fashion” sneakers with jeans, like during our travels from Boston to Honolulu. I love them. The top I wore was the Wide Strap Long Bra, which has wide straps (obviously) and a fairly heavy-duty and supportive built-in bra. I still wore a sports bra underneath, but for a non-impact or low-impact workout, like yoga or barre class, I could probably wear it alone. I wasn’t sure how tough the hike would be today, so I doubled up just in case.

I really love the back of this top! The PWR Bootcut Pants were really comfortable and flattering. The waistband is wide and hits low on the hips and the bootcut style is slimming to the legs. The material is soft and smooth and moved with me while I hiked up Diamond Head.

Ok, back to our hike!

As you can see, it started to get pretty crowded at Diamond Head as it got later into the morning. The path is somewhat narrow, but wide enough to pass by people. There were stairs about half way up and a couple of lighted tunnels to walk through. Mal and I reached the summit in about 25-30 minutes. There, we saw bunkers and a lighthouse from the top. The views were stunning! The descent took a lot less time (probably 15-20 minutes), but it was still quite steep.

Mal and I celebrated a successful hike with some headstands in the park at the bottom of Diamond Head. After our hike, we headed straight to breakfast at Bogart’s Cafe, which was a quick 5-minute drive away. (We’re going to try the Diamond Head Cove Health Bar tomorrow. It didn’t open until 9:00 AM, but Mal and I were starving at 8:15 AM!) Bogart’s had an awesome menu of lots of healthy options””there were so many things I wanted to try. I ended up going with the Acai Bowl, which was acai-flavored sorbet with granola and fresh berries and sliced banana with honey drizzled on top. It was so delicious””like dessert for breakfast!