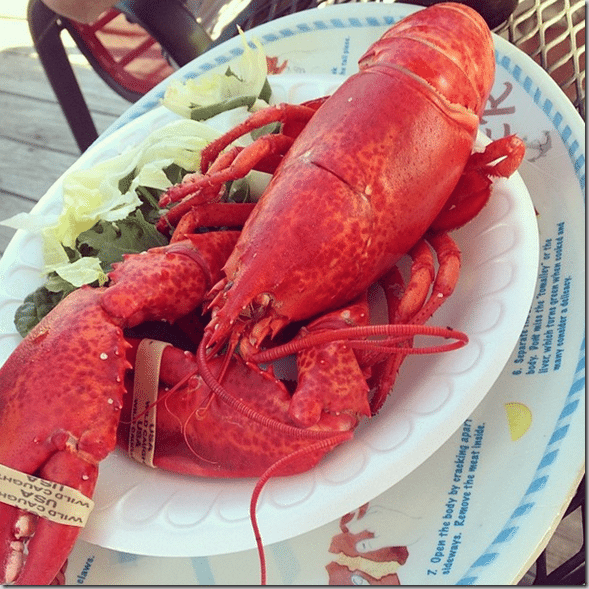 Hi, friends! I hope you had a wonderful Memorial Day weekend! Here’s a little recap from mine with some highs and lows…

Eating my first lobster of the season! It was delicious! Murphy developing some weird growth on the side of his body. On Friday morning, I noticed a bump on Murphy’s side. It didn’t bother him, but it was still pretty big and seemed to pop up overnight, so I made an appointment with the vet for this week. Well, later that afternoon, it turned into a bloody mess all over his side (almost like it exploded), so Mal and I took him to the vet to see what was going on with it.

Well, the vet didn’t know what it was. He said it could be anything from an infected bug bite to a malignant tumor, so we could either watch it for a few days or have him take a biopsy, which would tell us more after being sent off to a lab. Mal and I always freak out over stuff when it comes to Murphy, so we went with the (very expensive) biopsy procedure and we’ll get the results this week. A few days later though, we’re almost positive the growth is an infected bug bite. Ha! Oh well. I guess better safe than sorry, right? Lauren stopped by on Sunday morning with all sorts of goodies for both me and Baby Haupert. She’s the sweetest gal ever! Mal’s birthday dinner ended up being kind of a low of the weekend. After dealing with Murphy’s little medical scare, neither of us were in the mood for going out to dinner and we didn’t want to leave Murphy home alone, so we ended up ordering a pizza and hanging out. It was still a nice night (I mean, there were Funfetti cupcakes), but I felt kind of bad that the evening wasn’t what we had originally planned. The next day, however, Mal got to celebrate his birthday with friends at a barbecue, so he ended up having a wonderful birthday in the end! Do you freak out when your pet has health issues?