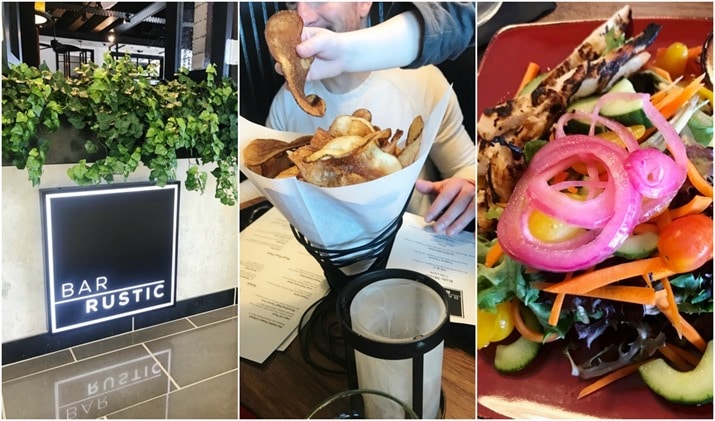 Good morning and a very happy, happier, HAPPIEST Monday to you!

We had quite the awesome weekend over here. Mal was on school vacation last week, so we finished it off with a family fun Friday, which continued on right through the end of the weekend. It was truly a wonderful three days with my boys. I really didn’t want the fun to end! But, of course, life always has some ups and downs, so here’s a recap via High Low High where I share both the high and low points from the weekend. LOW: Barely surviving Open WOD 17.1. Oy. It was rough and definitely not my best performance. I hit the wall (hard) toward the end of the workout, and the set of 50 dumbbell snatches totally crushed me. At one point, I was doing sets of three. Ugh, I was donezo. I’m honestly happy that I finished under 20 minutes. Related: I’m typically not one of those people who rolls around all dramatic after finishing a hard workout, but this workout was a doozy. As I rolled around in pain, I actually whined: “It hurts” to Mal, who was trying to congratulate me. Haha! Such a drama queen.

HIGH: Celebrating my finish with a Pecan Sticky Bun iced coffee! Will WOD for iced coffee! HIGH: Visiting BillyBeez with Quinn for the first time and having SO MUCH FUN! Seriously, it was AWESOME!! There’s so much to see and do. We’ll definitely be back! HIGH: After playing at Billy Beez for while, we all went out to lunch at Bar Rustic. What a great restaurant! We loved our experience (food, service, atmosphere), and Quinn found $20! 🙂 Well, technically, he pulled a napkin off the table next to ours and a HUGE wad of cash fell onto the floor. We gave it to our server, hoping that the person who lost it would be back and, sure enough, the man returned. He claimed his money and, as a thank you, he gave our server $20 to give to Qman. What a nice guy! HIGH: Getting our grocery shopping done early, and Mal starting a DTFN meal plan this week! I’m excited to have some extra healthy eating motivation! On the menu: Taco Salads, Chicken Fajitas (easiest recipe ever), Sweet Potato Quesadillas, Brussels Sprouts with bacon, and Buffalo Chicken Meatloaf (all recipes from Designed to Fit Nutrition). LOW: Spending most of the day on Saturday catching up with work when it was absolutely beautiful outside.

HIGH: Sneaking in some time at the playground with my boys before the day ended! HIGH: Family dinner at The Range! LOW: Quinn getting hungry (and cranky) while waiting for our meals. We decided to break out the iPad to distract him, but, unfortunately, the internet at the restaurant didn’t work. Whomp whomp.

HIGH: Our waitress realized what was happening and offered to leave her cell phone with her hotspot on it, so Quinn could use the Internet. She explained that she had a 4-year old and totally understood. It was so incredibly sweet of her and, of course, we tipped her appropriately! 🙂 HIGH: Qman actually EATING at a restaurant. I’d say 9 out 10 times that we go out for a meal, he doesn’t eat anything at all, except for some milk and maybe a few bites of fruit if we’re lucky, but he ate HALF of a bar pizza by himself!! Mal and I were totally impressed! LOW: Waking up on Sunday morning to some serious post-17.1 DOMS. Holy low back and hamstrings!!

HIGH: My sister and her family coming over on Sunday afternoon for lunch. The kids played and we attempted to make BLT Sushi after seeing a delicious-looking video on Facebook. LOW: Our BLT Sushi turning out just so-so. Ha! It was totally edible (and delicious… hello, bacon), but it didn’t really stay together. HIGH: My sister leaving a huge bag of hand-me-downs for Quinn. LOW: Discovering that “Matthew” (aka my sister) hid “Squid” inside the bag of hand-me-downs. Backstory on Squid: When we moved into our old house, we found this dog toy in our backyard. It was too big for Murphy (and his squishy pug face), so I gave it to my sister for her dog, Batman. Well, it turns out Squid is a super loud and annoying squeaky toy, so my sister always joked that Murphy “wanted” it back, and it’s been a running joke for years now. She finally surprised me with Squid this afternoon… and it will, of course, make its way back to her house someday. Mwhaha! HIGH: Taking a hot shower, getting into my pajamas, drinking eggnog tea, and eating coconut butter cups while catching up with The Bachelor.

Your turn! Share a HIGH and LOW from your weekend!