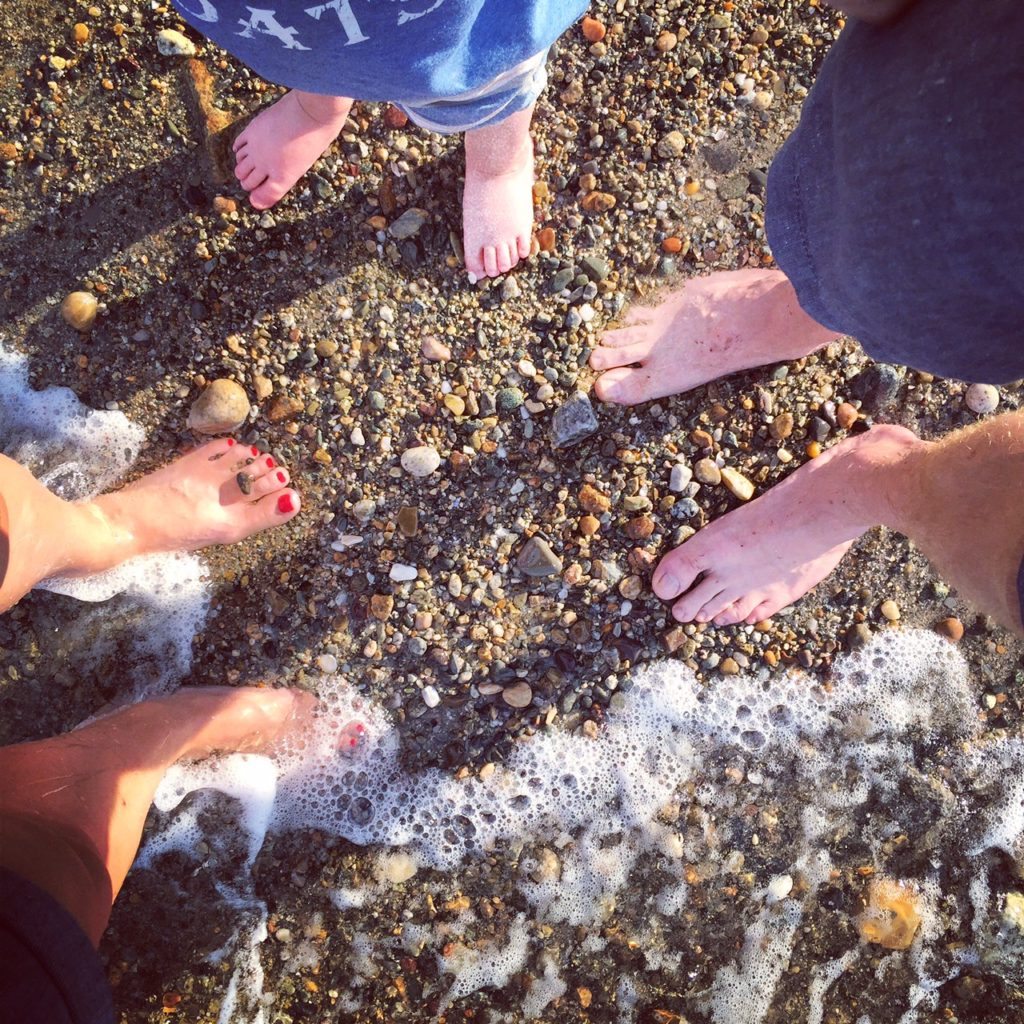 Good morning and happy Monday! How was your weekend?? We had a pretty good one over here. Truthfully, it was a mix of emotions (for all of us) at times, so I figured a High Low High post was the perfect way to recap it. If you’re unfamiliar with this series, I recap the high and low points of the weekend. It’s fun, so let’s do it!

HIGH: Visiting the New England Aquarium with our friends Erin, Mike, and Finn! Finding Dory and Nemo was definitely one of the highlights of the trip! 🙂 Quinn’s favorite part though was the “touch tank” where he had the opportunity to pet sting rays and tiny sharks. He wasn’t afraid at all and got really good at petting them. We even joked that he was the “sting ray whisper” because of how many swam up to him! It was such a fun adventure, and I know we’ll be back again soon! LOW: Getting an infection in my knee. Guys, this story is so random. So, I wake up on Thursday morning with a sore knee. It feels like a bruise, but I don’t remember doing anything to hurt it. I actually don’t think much of it (other than it’s a little strange), so I go to CrossFit, work out, and continue on with my day. (It doesn’t hurt that bad at this point.) On Friday, I wake up to a much sorer knee, but, again, I don’t think much of it, especially since we’re kind of rushing around getting ready for an early morning trip to the aquarium. When we arrive in Boston, my knee really starts to hurt. It’s also red and swollen now. I say something to Mal about it and he suggests that I call my doctor. I’m a little hesitant because I have plans to drive down to the Cape to celebrate Kerrie‘s birthday later that morning. I call my doctor, but hope to get a Monday appointment. I talk to one of the nurses and explain my symptoms. She very sternly tells me that I cannot wait until Monday and that I need to visit Urgent Care immediately. She says (like three times): “You need to get that evaluated TODAY.” Oh, boy. Since we’re already in Boston, Mal drops me off at the hospital (he and Qman head home for nap time) where I wait at Urgent Care for 2.5 hours. Oy. I finally see a doctor and she diagnoses me with cellulitis, which is a (potentially serious) bacterial infection under the skin. The doctor told me if I had waited until Monday to seek care, I might have been in “rough shape,” so it’s a good thing I didn’t! I also asked her how the heck I got an infection under the skin since there wasn’t any sort of cut/crack/bite there. She then asked me if I shaved my legs. I said yes, so she explain that perhaps bacteria go into a microscopic cut from the razor and, since my immune system is compromised because of the drugs I take, I can’t fight off infection as well as a healthy person. Blah. Now I’m on antibiotics and my knee is already quite a bit better, but WTF. LOW: Not going to the Cape to celebrate Kerrie’s birthday. By the time I saw a doctor, took the T home, and went to the pharmacy, most of the day had gotten away. I seriously considered driving down anyway, but the more I thought about it, the more I realized I should probably take it easy. My body was already having issues fighting an infection, so I figured a night out of drinking, dancing, and staying up late was probably not the best thing for it, so I reluctantly stayed home… and slept for 11 hours. Clearly, my body needed it! Mal and I took turns playing Cornhole, and Qman had a BLAST playing in the pool! HIGH: Finding the Skull while organizing our closet. Nearly 4 years later, Mal and I are STILL playing the “skull game.” LOW: Being roped into a home organization project during nap time. Usually, I’m game for organizing, but I just wasn’t feeling it. Mal was about to lose his mind over the “shoe situation” in our downstairs closet (the majority of the shoes were mine), so we reorganized and moved most of our shoes upstairs into our bedroom closet. It was definitely much-needed, but it took me a little while to get motivated to actually do it. LOW: Leaving Harbor Fire about 15 minutes later with a tantruming toddler. Qman was just not into it. It was noisy and crowded, which isn’t typically his scene. Mal and I tried everything to get him to calm down (holy death stares from patrons), but we didn’t have any luck, so we said goodbye to our friends and peaced out.

HIGH: Playing at the beach. After Quinn’s meltdown, we headed to the beach to (hopefully) turn things around. Qman loved playing in the water! The only way to get Quinn to look at the camera: Telling him Dada had a bug on his shirt! So serious. Haha! LOW: Leaving the beach with a tantruming toddler. *sigh* It was just one of those days.

HIGH: Buying a bottle of wine on the way home and then watching the CrossFit Games. #parentingwin

Your turn: Pick a high and low from your weekend to share!

P.S. Be sure to enter my giveaway to win some seriously delicious and refreshing sparkling tea from Bhakti!