Have I mentioned that we're never leaving the South Shore? 🙂 The longer I live here, the more I love it.

Sunday was an awesome day - easily one of the best of the summer. We spent all day (10 hours) at the beach with friends and, my gosh, we had a great time. It was our first experience driving onto Duxbury Beach and now we know why everyone raves about the experience so much. The actual drive to the beach was breathtaking (I felt like we were on the California coast) and the ease of driving all of your stuff right onto the sand was the best thing ever. I'm not sure I'll ever look at a trip to the beach the same way again! Once we parked and unpacked, sun protection was our first matter of business. Putting sunscreen on Quinn used to be the biggest fight, but now he loves applying his "kid's sunblock" and insists on doing it himself. Then, breakfast was our next matter of business. Our friends brought ingredients to make breakfast sandwiches and home fries, which, of course, was the greatest thing ever. They're Duxbury Beach regulars, so they had things planned out to a science. Oh, yea, the spicy Bloody Mary's were pretty epic, too! FYI: My insulated tumbler is from Corksicle - it's my favorite! Once we had food in our bellies, it was play time for both the kids and adults! 🙂 The morning flew by and, before we knew it, it was lunchtime and there was all sorts of delicious food to share. We had originally planned to leave after lunch with our friends for nap time (their little guy is 2 years old), but then we thought maybe the boys would nap in the car if we took them for a drive down the beach. Sure enough, they zonked out and our beach day continued! Qman slept for nearly 2 hours and woke up ready to play at the beach some more! (He's holding a tiny hermit crab in his hand.) Eventually, the tide came in and we ran out of space, so it was time to leave. On the way home, we stopped at The Oysterman for dinner, which ended up being the perfect way to end a day at the beach. We shared pulled pork sliders and fried oysters as appetizers. And then I ordered a big salad with spiced chicken for my entree. We had heard The Oysterman was a great spot, and it definitely lived up to its positive review. We're big fans and will definitely visit again! What's your favorite part about a day at the beach?

I honestly love it all, but I especially love quiet mornings on the beach. They're so relaxing. 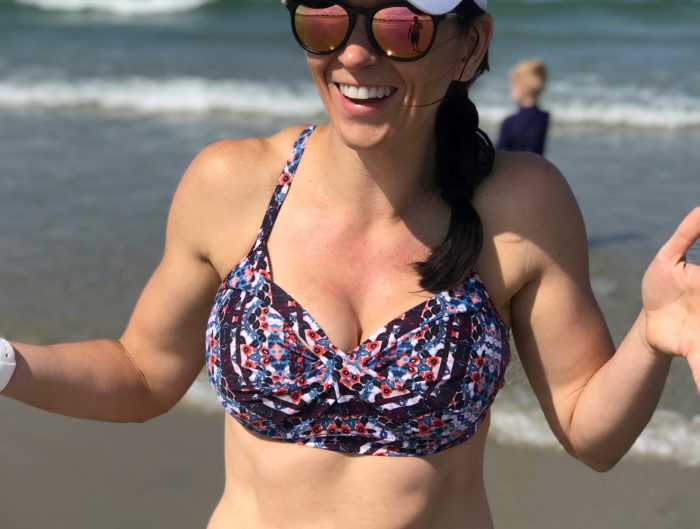 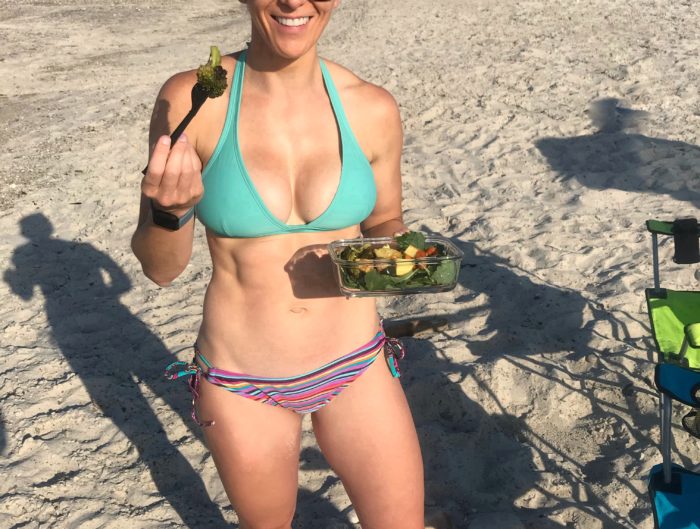 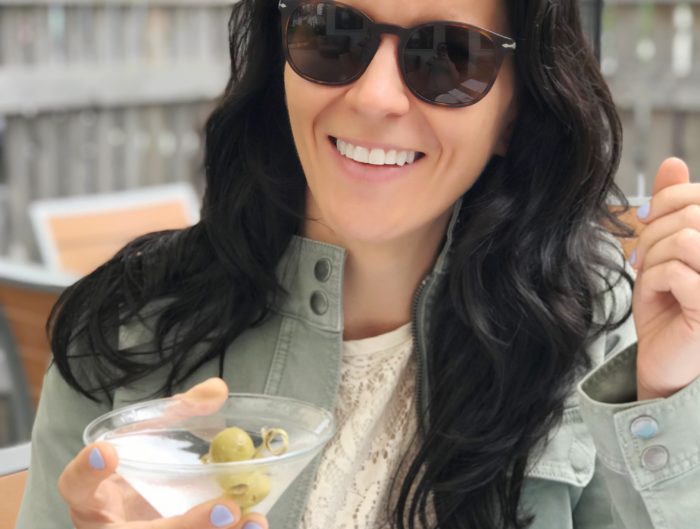 I love taking my dog to the beach. He has so much fun chasing and jumping over the waves. It makes me excited to have a kid some day and see him or her play on the beach (I hope I have a water baby!).

Beautiful! I just love long and relaxing days at the beach that start bright and early and end late. Something so peaceful about them.

It’s been sort of rainy here in southern Connecticut on a bunch of Saturdays lately, so that’s definitely been a bummer. I hope we can get a nice long beach day in soon!

Love that tumbler!! (How does it compare to the Yeti ones??)
I haven’t been to the beach since we left Florida and I’m okay with that – I’m more of a lake person 🙂
Walking the beach in the morning and hunting for shells is my favorite thing to do at the beach! I also love to snorkel!
Have a great day!

Mal has a Yeti, and I like mine a lot better! 🙂

What a day, indeed! I love spending the day at the beach from relaxing in a chair to playing in the water. But, snacks are a must. I love how prepared your friends were with the breakfast set-up!

That’s awesome! I’ve actually never heard you can drive on to a beach in Mass?! and I live somewhat close (in Portsmouth, NH!) those fried oysters look incredible! 🙂

I agree — quiet mornings at the beach are the best! I love when I’m the first one there!

Where did you get the straw for your corksicle? I’ve been looking for one!

It’s from an old plastic tumbler.

I just recently started enjoying beach days, and I think it’s because I now understand the importance of total and complete relaxation and self-care. I absolutely love mornings beachside. I visited Bethany Beach, DE this summer with my boyfriend and was spoiled to a hotel suite ON the beach. Waking up and hearing the sounds of peaceful waves with coffee in hand was simply the best. On the total opposite end of the spectrum, nothing is better than playing a game of ultimate football with a gaggle of your pals + adult beverages, which we also did!

I recognize Quinn’s Target Dollar Spot hat! Those are the only hats my 4 and 2 year olds will wear!!!

Hi – we are heading to Mass next week. I just looked it up and we are only about 20 minutes from Duxbury Beach. We would like to try it out for a day. Obviously we aren’t a resident so did you just get a day pass? Is there is a certain entrance (address) to go to so you can drive on the beach?

Good question! I’m not sure you can buy a day pass. I know Duxbury sells stickers ($325), but they’re for the whole summer. The Duxbury Beach website might have additional info about it!