Failed Attempt at the Filthy Fifty 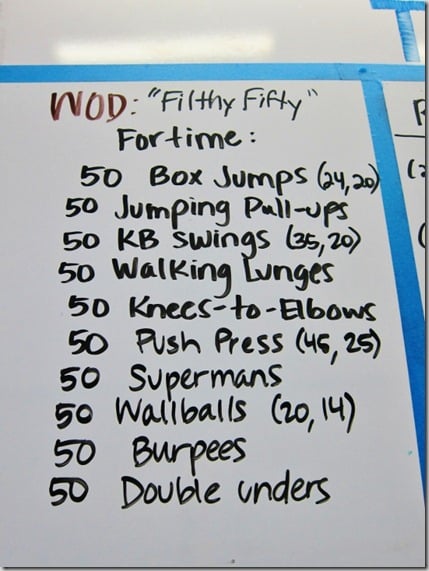 I was pumped for the Filthy Fifty last night, but, unfortunately, things just didn’t go as planned with my performance. I was obviously happy to just be able to CrossFit (a chronic illness definitely changed my perspective), but I still wasn’t thrilled with my time, especially since it was 3.5 minutes slower than my previous attempt. Whomp whomp indeed.

I love the Filthy Fifty because it’s all things CrossFit””10 different exercises that just scream “CrossFit” to me. This type of workout is why I love the sport so much. I love long, endurance workouts with tons of variety, so I was totally jazzed and feeling good when I grabbed all of the different equipment needed for the WOD. Things started out great. I flew through the box jumps, jumping pull-ups, and kettlebell swings with no issues at all. Mal was right next to me, so I tried to keep up with him. We were neck-in-neck up until the Back Extensions, and then I had a total brain fart: I skipped the Wallballs and went right for the Burpees. I have no idea what happened, but I made it to 39 Burpees before my friend Colleen pointed out that I had skipped the Wallballs. Crap.

I went pretty hard on the Burpees because I thought I was almost done, so when I finished them and went to do the Wallballs, I wanted to curl up on the floor in the fetal position and just die. I honestly felt terrible””nauseous even””when I was doing them, so I kept missing the target, which slowed me down a ton. At this point, I really should have scaled down to the 10-pound medicine ball (I used a 14-pounder that basically crushed me on each rep), but I was too stubborn to switch. Looking back, it was pretty dumb to stay with that weight, especially since I was struggling so much, but, hey, live and learn, right? When I got home last night, I thought about what happened with the Filthy Fifty. Obviously, going hard on the Burpees and not scaling on the Wallballs slowed me down, but instead of focusing on everything that I did wrong during the WOD, I thought about what went right and the good things that came from the workout:

I have to admit, actually typing out those bullet points made me feel even better about the situation. I know it’s just one workout and, obviously, not the end of the world, but I think it’s important to take a step back and focus on the positive when you don’t meet the expectations you set for yourself. Accept and adjust.

This morning’s breakfast was a Trader Joe’s Brown Rice Tortilla with sunflower butter and banana slices, which I put in the toaster oven for a few minutes, so it would get all soft and gooey inside. Yum! When I first bought these brown rice tortillas, I hated them. They were dry, crumbly, and totally broke apart when I tried to roll them into enchiladas for dinner one night. They were actually the catalyst for my new gluten-free product reviews on CNC””they were so terrible, I felt the need to warn other people about them! Haha!

When I asked you guys for your recommendations for your favorite gluten-free products yesterday, Maureen specifically mentioned these tortillas in the comment section of CNC. Obviously, I was a bit surprised considering my experience with them, so I emailed her to see if maybe I got a bad batch or something because she really liked them. Well, it turns out, if you nuke them in the microwave for 15 seconds, they become soft, bendy, and much easier to use. Genius. (Obviously, I’m still getting used to this gluten-free stuff.)

The Trader Joe’s Brown Rice Tortillas taste delicious, but the texture definitely takes some getting used to. They’re a lot chewier and not as soft as a regular tortilla, but I liked the texture. It’s firmer and stiffer and, as Maureen suggested, makes a great base for a pizza. I didn’t think I’d ever buy these brown rice tortillas again, but I’m going to give them another chance, especially since they have the potential to become pizza. I’ll be sure to report back about that! CrossFit is all the rage right now and, with its Open competition (aka CrossFit Games) starting just last week, there’s even more of a reason to give it a try for yourself. To further entice you and give you a taste of what CrossFit is all about, here’s a WOD (“Workout of the Day”) that will work your entire body in just 4 moves.

A Quick and Sweaty CrossFit-Inspired Workout

How do you deal with failure when it comes to your workouts/fitness performance?

Have you ever had a “brain fart” during a workout/race/competition? What happened?