I think it's so funny when dogs watch TV. Murphy was really into the AKC National Championship on Animal Planet this afternoon. For a good 10-15 minutes, he stared intently at the dogs on TV. Actually, he's still watching.

I bet Murphy is wondering why he isn't in the dog show. He'd obviously win the Toy category! 😉 I'm going to a Super Bowl party later this afternoon, so instead of eating a "real" lunch, I just ate a couple of snacks. I know there's going to be lots of delicious food at the party, so I left plenty of room. 😉

Mid-morning, I made myself an iced coffee with non-fat milk and scoop of chocolate whey protein mixed in. Mal has been making this combo lately and loving it, so I had to give it a try. Verdict: Tastes like chocolate Carnation Instant Breakfast. Remember those things? I used to drink them all of the time. Yuummm! Around noon, I made myself two whole wheat Arnold Sandwich thins with Barney Butter spread on top. Again, this probably wasn't the most nutritious snack, but there's slim pickings in our kitchen due to Project Eat It So We Don't Have to Move It. I'm off to run some errands (including signing our new lease!) and then to the Super Bowl party.

P.S. My 3-Minute Oatmeal Raisin Cookie was featured on the DailySpark today. 😀 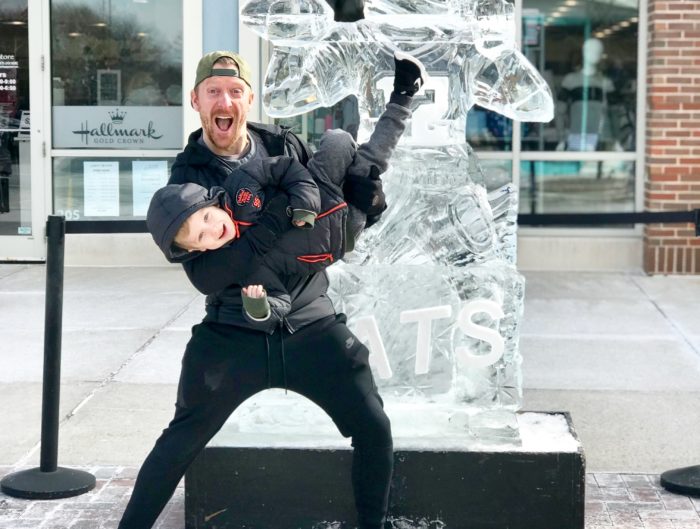 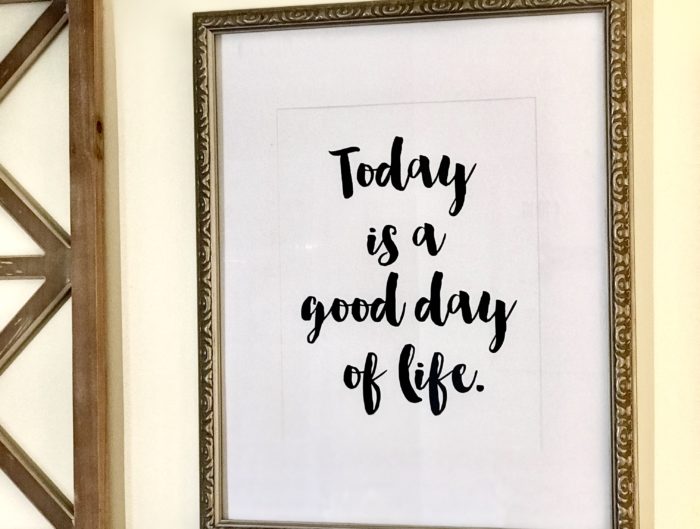 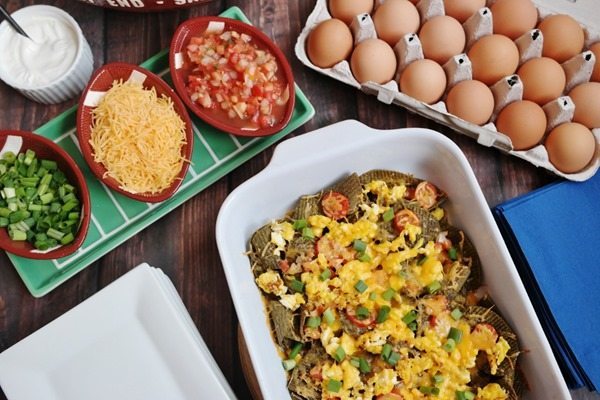 You should put the puppy bowl on for Murphy, he would probably love it!! It’s on Animal Planet. http://animal.discovery.com/tv/puppy-bowl/about.html Our pup LOVES it and just stares at all the puppies!

My pup has no interest in dog shows on TV, I think he just gets jealous!!

So cute that he is watching the dog show! Our old dog used to bark at the tv when other dogs came on-i think he was jealous of them.

Lauren @ eater not a runner Reply

That is so cute, he looks so enthralled!

My roommate’s dog, Blizzard, used to watch TV anytime other dogs were on. We’d tune in to Animal Planet just to keep her amused! 😀

Oh, your dog is smarter than my dog (even though she’s a poodle and is *meant* to be intelligent). She absolutely can’t recognise anythign happening on the tv, though very rarely will be intrigued by a dog barking on it.

But I love her anyway 🙂

My puggle goes nuts any time there is a dog or other animal on tv. He runs up to the tv and makes this strange howling sound, and then runs around trying to find the animal on tv. I think he doesn’t quite understand the concept 😉

That is too cute! My grandparents board their dog at a kennel where for an extra fee, you can choose TV shows or movies for your dog to watch. I’m sure Animal Planet is pretty popular there!

Saints, huh? I should be offended because I live in Indiana, but I do have a soft spot for the underdog. And I’m getting tired of Peyton’s mug All. Freaking. Over the place. So I do not begrudge you the choice 😀

Murphy is so funny! Our bulldog does not watch TV. The dog we used to have, a lhasa apso/beagle would only watch when dogs were on. He’d often bark while watching them. Interestingly, (maybe only to me?) he’d bark at himself in the mirror sometimes too. Our bulldog, Annie, can be in a room that is walled in mirrors (we have two) and she does not seem to notice the “bulldog” staring back at her. I am wondering which of these two is more intelligent, the dog who barked at himself and other dogs on TV or the dog who seems not to care? 😉

I am a Falcons fan and am rooting for the Saints because they are in our division. Go NFC South!

Haha aw Murphy is so cute! I just love him.

Sam (Merit to the Carrot) Reply

Murphy would most definitely win. His character is off the charts!

My dog doesn’t really watch tv, but a few years ago there was a tv commercial that would stop him dead in his tracks every time it came on. It was so weird!

Jessica @ How Sweet It Is Reply

Hahaha Murphy is such a cutie!

Best post ever! Murphy is too cute watching the dog show. And I LOVE Carnation Instant Breakfast… it’s still a go to for me!

Not surprised your 3-mibute cookies were featured! They’re so easy and satisfying. Good luck with moving:) As someone who has done it MANY times, I sympathize. It’ll be easier seeing as you haven’t been in thi place long and your clutter probably hasn’t gotten too out of hand!

Yay! I am from New Orleans and I have always said I am not a fair weather friend to the Saints but I must say I am very happy they are in the Super Bowl and would actually watch it if it wasn’t on at 11 pm in the UK 🙂 Now for them to win!! Geaux Saints!!

Our dog (a cattledog) NEVER watches television, but one time we turned to Animal Planet, and there was a herding competition going on, and she was enthralled!!! It was hilarious.

When did u drink carnation?!
Are they and good?! Better than boost or ensure? I woul really like to know 🙂

Wow Murphy has gotten SO big!!

my dog doesn’t really care about other dogs on tv but he sure gets confused when he hears a squeaky toy – that commercial where the dog owners are trying to find their dog and keep squeaking away drives him batty!!!

Hehe I love it when dogs watch TV – My gran’s dog used to do it, and he’d bark like mad then run round the back trying to find the dog – mega cute!
Have a good time tonight 🙂

Dogs are funny. My parents dog barks at one certain newscaster on TV. Just him. Weird.

oh that photo of Murphy is TOO CUTE 🙂

ahhhhhhhh so cute!!! he is so focused!

Murphy is so funny – that’s adorable! Our cats will try to go after certain things on TV, they like basketball games!!

That pic of murphy is too cute. Have fun at the superbowl party!

I love that Murphy is going to the party, too! He’s worked up an appetite while watching the Superbowl for Dogs!

My dogs LOVE watching any movies or tv shows with horses on them. Two tiny chihuahua’s glued to the tube because of horses…so funny.

You make me want to get a dog!! Your Super Bowl glass is very fitting, btw. 🙂

How cute – Murphy watching TV. I think most of America is on snack diet today, so you’re not alone : ) Have fun!

My kitty loves to watch me do the WiiFit Plus. Too bad she doesn’t actually exercise with it as well.

that picture of murphy is SO CUTE!!! our little puppy freaks out if she hears another dog on TV, it’s one of my favorite things 🙂

omg that dog is fat. cute, but get him on a diet asap.

I have to laugh at your dog watching TV, because mine does it ALL THE TIME! The only problem is she barks at anything on the screen with 4 legs, so anytime there’s a dog show or a commercial with an animal in it, she starts barking!

Congrats on making it to the DailySpark!

Haha Murphy is so cute watching the other doggies on tv!! Your iced coffee with chocolate protein powder sounds great!!

The latte with chocolate sounds great. And murphy would totally win!

Jessica @ The Process of Healing Reply

Congrats on the daily spark!!!
And murphy is so cute!

@Lee: Thanks for your concern, but his vet says he’s very healthy and not overweight.

Congrats on the daily spark. I finally made those 3-minute cookies and now I can’t stop eating them! Yum. Good for breakfast on the go or a healthified dessert.

That is such an adorable picture of Murphy!

I love pugs and this picture of Murphy just made me giggle. I love his little muffin top…or double dose of muffin top really.

Your dog is sooo adorable, my cat used to watch tv with me each night for hrs sometimes.

Congrats on your recipe being featured on the DailySpark.

Ha I thinks its hilarious when dogs watch tv too! We used to leave on Animal Planet for our dog when we went out sometimes