I was such a waste of space last night. And it ruled. Mal insisted on cooking dinner by himself last night. When he has the time, he loves putting on his iPod and zoning out while he cooks. We didn’t go to CrossFit last night, so Mal had some extra time to prepare dinner. I was comfy on the couch, so I let him do his thing in the kitchen. Thanks, Mal! Of course, we all know who kept him company while he cooked. 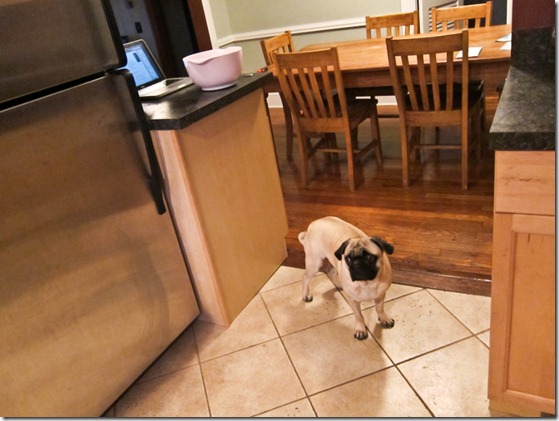 Murphy didn’t let Mal out of his sight while he prepared the chicken for dinner. After a small taste of chicken a few weeks ago, Murphy is now obsessed with it. He learned the word “chicken” real fast! Once the chicken was in the oven (and there was no chance of it falling on the floor), Murphy came into the living room to keep me company on the couch. He’s not one of the dogs that just lays down to cuddle, Murphy needs to find the best possible position (on you) before he decides that he is sufficiently comfortable. Typically, this involves multiple “pug circles” and some annoyed/frustrated grunting. About 40 minutes later, dinner was served. Mal made Chicken with Tomatoes, Onions, and Black Olives. He didn’t use a recipe, but here’s the gist of the ingredients and what he did to make it. After dinner, I enjoyed a couple of pieces of dark chocolate. This time, I managed not to eat half of the bar. It was a nice night.