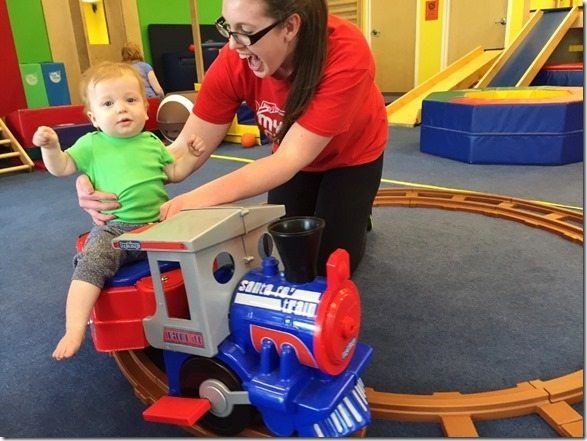 I enjoyed a fabulous Mother’s Day celebration with my family yesterday! It started, bright and early, pretty much as soon as Quinn woke up. I arrived home late from Mexico the night before and he was already in bed, so I couldn’t wait to see him. Plus, I had some maracas to give him. Mal gave me a card that said “from the two of us” on the outside. I wasn’t exactly sure who that was referring to, so I asked for clarification. I mean, there were two dogs on the front. Was it from Quinn and Murphy since I am both of their moms? Or did Mal and Quinn team up to give me this card? It was hard to tell. (It ended up being from Mal and Quinn.) Mal also got me a gift, but he said I had to “find it.” Of course, I had to find it. I wouldn’t expect anything less from my husband. Haha! Mal cooked me some eggs for breakfast, and I topped them with a big scoop of salsa. Delish! After that, I wanted something more to eat, so I had a chocolate peanut butter GFB and an iced coffee with soy milk. A short while later, Quinn went down for his morning nap, so I unpacked from my trip, cleaned up the house, and replied to some emails. Just before he woke up, I snacked on a bowl of cereal (rice Chex + Cheerios + banana slices + soy milk). While Quinn and I played on the sun porch, a special delivery arrived at our house. My father-in-law sent me a bouquet of flowers (orange – his favorite color), a big box of chocolates (he knows me so well), and a card wishing me a happy first Mother’s Day. He had them delivered yesterday since he knew I was away in Mexico. Isn’t that so incredibly thoughtful of him? It was such a nice surprise and made me so happy. And, of course, I dug into the chocolates immediately. After that, I fed Quinn second breakfast and got him ready to go to his weekly class at My Gym. As soon as I opened the door of my car, I found my Mother’s Day gift from Mal: a super clean interior. Woohoo! I told Mal that I didn’t want a gift for Mother’s Day (because I was going to Mexico), so a clean car was such an awesome surprise. I seriously have the best husband ever. As always, Quinn and I had a blast at My Gym. He crawled through a tunnel and rode a train during class! So fun! Quinn took a nap when we got home, so I whipped up some lunch (chicken salad + rice crackers + more chocolate) and then tried to get my life in order. (I’m off to Colorado tomorrow for BLEND, so I needed to figure out my travel plans.) When Quinn woke up from his nap, I fed him a snack and then we headed out with Dad to run some errands. The afternoon ended up flying by, so we ordered take-out from Lime Leaf (our go-to) for dinner. As soon as Quinn went to bed, Mal did too. (He wasn’t feeling well.) I had the house to myself, so I spent the evening working away, eat chocolate and catching up on episodes of Ellen. The entire day, from start to finish, was a wonderful way to celebrate my first Mother’s Day!

What’s the best Mother’s Day gift you’ve ever given or received?

What’s your go-to take-out order when you’re just not in the mood to cook?

When was the last time you cleaned your car?