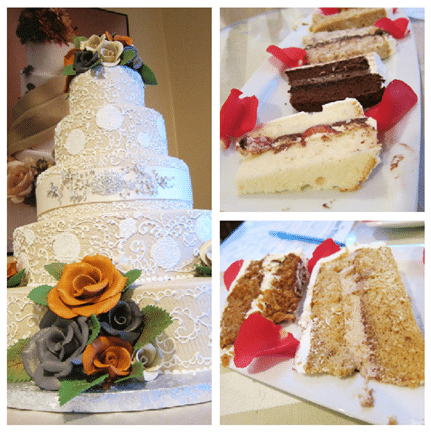 Hi, friends! Happy Monday! How was your weekend? I hope it was a wonderful one! My weekend was all about friends and cake””two of my favorite things ever.

On Saturday afternoon, I joined my friend Jen for a cake tasting at Konditor Meister to help her pick out a second flavor for her wedding cake. Jen loves the chocolate-mocha cake from Konditor Meister, so that was a definite, but she also wanted a non-chocolate flavor for her wedding cake. Jen knows my favorite food ever is cake, so she asked me to come along. Obviously, I was more than happy to help!

Like Jen, I also really love the cakes from Konditor Meister (my bridal shower cake was from there), but I had never actually been to the store, so I was even more excited to visit with her. When we arrived, Jen and I were taken into a back room with little cafÃ©-style tables. A couple of minutes later, one of the wedding cake “consultants” came over to us and asked if we had any specific cake flavors that we wanted to try. Jen wasn’t picky at all and told the woman to just “surprise”  her. And, boy, were we surprised! We received two huge trays with 10 slices of cake to try. We were in cake heaven. After much debate, Jen decided on chocolate cake with mocha frosting for her top and bottom layers and gold cake with cognac frosting for her second and third layers. Jen and I agreed the cognac frosting wasn’t a flavor we would have initially picked, but we’re glad we tried it because it was absolutely delicious, especially with the gold cake. It was also a really nice compliment to Jen’s beloved chocolate-mocha cake.

I’m so glad Jen invited me along to her cake tasting. Of course, it was delicious, but it was also really neat to be part of such an important decision. It’s all about the cake!

Speaking of Konditor Meister cake, I got to enjoy even more of it at Jen’s bridal shower yesterday. Naturally, it was chocolate-mocha. At her shower, we enjoyed a delicious and healthy lunch. And then the bride-to-be opened gifts! On Saturday night, Mal and I met our friends Phil and Kerri for dinner at Picco. It was a beautiful night””a little chilly, but beautiful””so we sat outside. For dinner, I ordered the fish tacos, which came with red onions, jalapenos, avocado, cabbage slaw, and cilantro. They were pretty good. (I didn’t eat the tortillas.) I ordered wine with dinner! Mal ordered a chocolate brownie sundae with coconut chip ice cream for dessert. It was massive and there was no way he could eat it all, so I helped him out by eating a few bites. It was amazing. During dinner with Phil and Kerri, we got onto the topic of crazy concerts we’ve attended over the years. For me, the free Green Day concert at the Hatch Shell in Boston immediately came to mind. It was September 1994, so I was just starting my freshman year of high school. My mom thought Green Day was some earthy-crunchy, hippy band, so she let me go into the city with a few of my friends for the show. I also don’t think any of us expected it to get so out of hand. At the time, Green Day was popular, but they weren’t that popular.

The concert was totally nuts. It was estimated that 70,000 – 100,000 people showed up on the Esplanade for it. There was a huge mosh-pit (a guy standing next to me threw his bike into it), dozens of people were arrested, and more than 100 people were injured [source]. After only 20 minutes, Green Day ended their show because a massive mud fight broke out in the crowd. Thankfully, my friends and I were smart enough (ok, we were kind of scared) to stay far away from the madness, so we made it home safe and sound.

What’s the craziest concert you’ve ever been to?