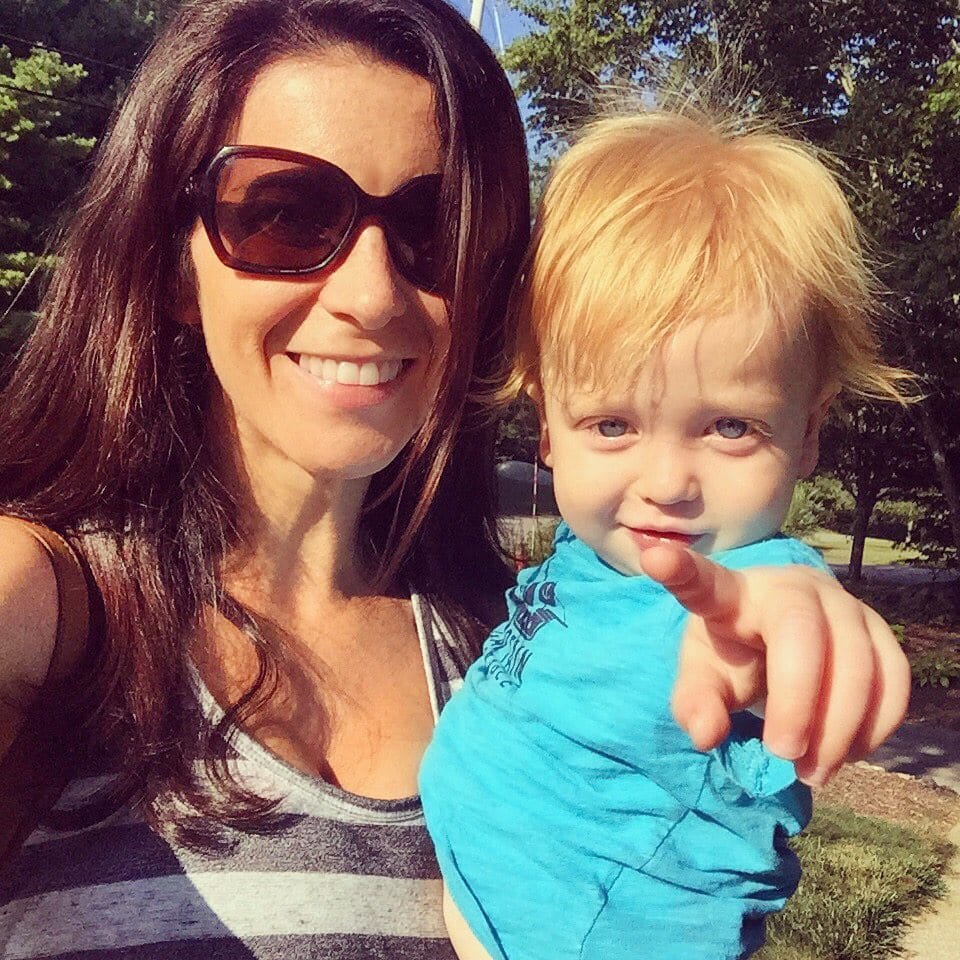 I can’t believe it’s September already! The summer totally FLEW BY, but I’m ready to get back into a routine. I mean, summer was awesome””we had a lot of fun””but between moving, traveling, and working late into the night/not sleeping, I was definitely burning the candle at both ends, so I welcome the routine in our lives. Bring it on!

Both Mal and Quinn went back-to-school yesterday. Quinn has all new teachers at his new daycare and he’s even in a different room: the toddler room. He’s one of the youngest kids, but he handled it well yesterday. His teachers even said he had a “terrific” day, so I am glad things improved after I dropped him off. Oh, this story is so sad (for me)…

When I dropped Quinn off at daycare yesterday morning, the whole room of kids turned around and stared at him. Not surprisingly, he immediately burst out crying. Poor kid. It was overwhelming for him, so I stayed and played for awhile. We splashed in the nearby sink (he loves water) and he eventually calmed down. I felt terrible leaving, but one of his teachers assured me he would be just fine and, deep down, I knew he would be.

After that, I drove to Southfield for a hill workout, which was tough (my legs were dead from the previous day’s KFIT workout), but fun too. I love a good challenge and hill repeats definitely pushed me to the limit. Here’s the workout that I did: 15-minute warm up + 6 X 60-second hill climb followed by 0:90 recovery jog + 10-minute cool down. The workout kicked my butt (literally), so tomorrow is definitely a rest day. Then, I hopped in the car, drove home, quickly showered, ate a couple of cookies, and immediately sat down at my desk to bust out some work. Of course, an iced coffee was needed! I took a break for lunch around noon. On the menu: Breakfast potatoes with chicken, broccoli, summer squash, and Sriracha. (I spy a pug friend!) Mid-afternoon, I took another break to make a Periscope broadcast (re: stroller running, Invisalign, starting CrossFit) and to eat a snack. I worked until about 4:00 PM and then went to pick up Quinn at daycare. Yay! We both survived the first day back. (I swear, it was harder on me than him! I missed my little monkey!) The rest of the evening was fairly low-key. We took Murphy for a walk, ate dinner, watched a little TV (I am still routing for Johnny Mac on Big Brother!) and went to bed at a reasonable hour. I already like our new routine! We had “Just Sauce” Turkey Bolognese from Trader Joe’s over pasta, which was quite tasty and super easy to make. I will definitely buy it again. It’s perfect for a quickie meal. Even though we’re back into a routine for the most part, we have quite a busy September ahead. Check out what’s on the agenda for me:

As you can see, I have lots of travel and adventures coming up!

What’s on your calendar for September?

P.S. Just a reminder: Enter to win a $100 credit to Minted to purchase anything you’d like from their website! Just use this link to enter: http://www.minted.com/el/bk_carrotsncake083115 I will pick a winner on Friday, September 4th.