Brought To You By The Letter ‘B’ 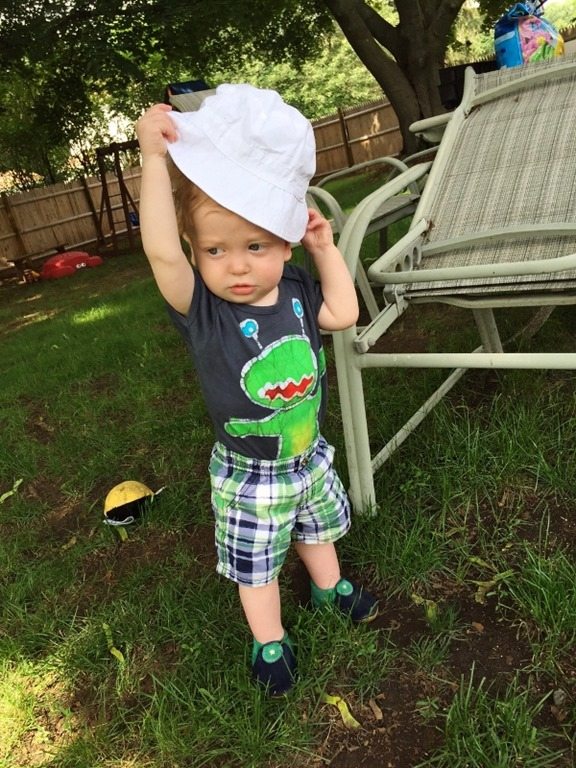 Hello and good morning to you! Tuesday’s recap is brought to you by the letter ‘B‘.

Yesterday started bright and early with breakfast. For Quinn: Rice Chex with milk, pear chunks, and a banana. For me: A breakfast sandwich made with egg, ham, and sauteed kale on a toasted English muffin with lots of butter. After breakfast, we played with Quinn’s new sports set, which included five different kinds of balls + a baseball bat and a hockey stick. Then, we hit the road to visit Quinn’s best bud (and cousin), Matthew. We went outside, so Quinn wore his bucket hat… for like 30 seconds. We played with Batman and gave him lots of bear hugs. We also played in the sandbox. (Quinn wasn’t sure what to make of the sand at first. Haha!) After a little while though, he started to enjoy the sand and beach toys. Swings are a real blast with Grandma and Matthew! Here’s Matthew balancing rocks in a cup while swinging. He’s so talented! After playing for awhile, it was time for lunch and a “baba.” Then, it was time for birthday cake to celebrate my belated 35th. It was incredible. Listen to this flavor combo: Raspberry and lemon cake with buttercream frosting. Mmm! Later that afternoon, I headed to KFIT for a workout. By the end, I was a sweaty beast. I literally looked like I had just taken a bath. When I got home, Quinn was eating dinner, which meant his pug brother was not far away. For dinner, I had egg whites mixed with sharp cheddar, sauteed summer squash + zucchini and ketchup on top. It might sound a little bland and boring, but trust me, it wasn’t at all. And, for dessert, I enjoyed some fresh blueberries with whipped cream. Name a ‘B’ word associated with your day yesterday!

Growing up, did you watch Sesame Street?

P.S. Be sure to enter my giveaway to win a $250 gift certificate to Lorna Jane!

PrevPreviousLately I’ve Been…
NextA New Day In The Life XIINext