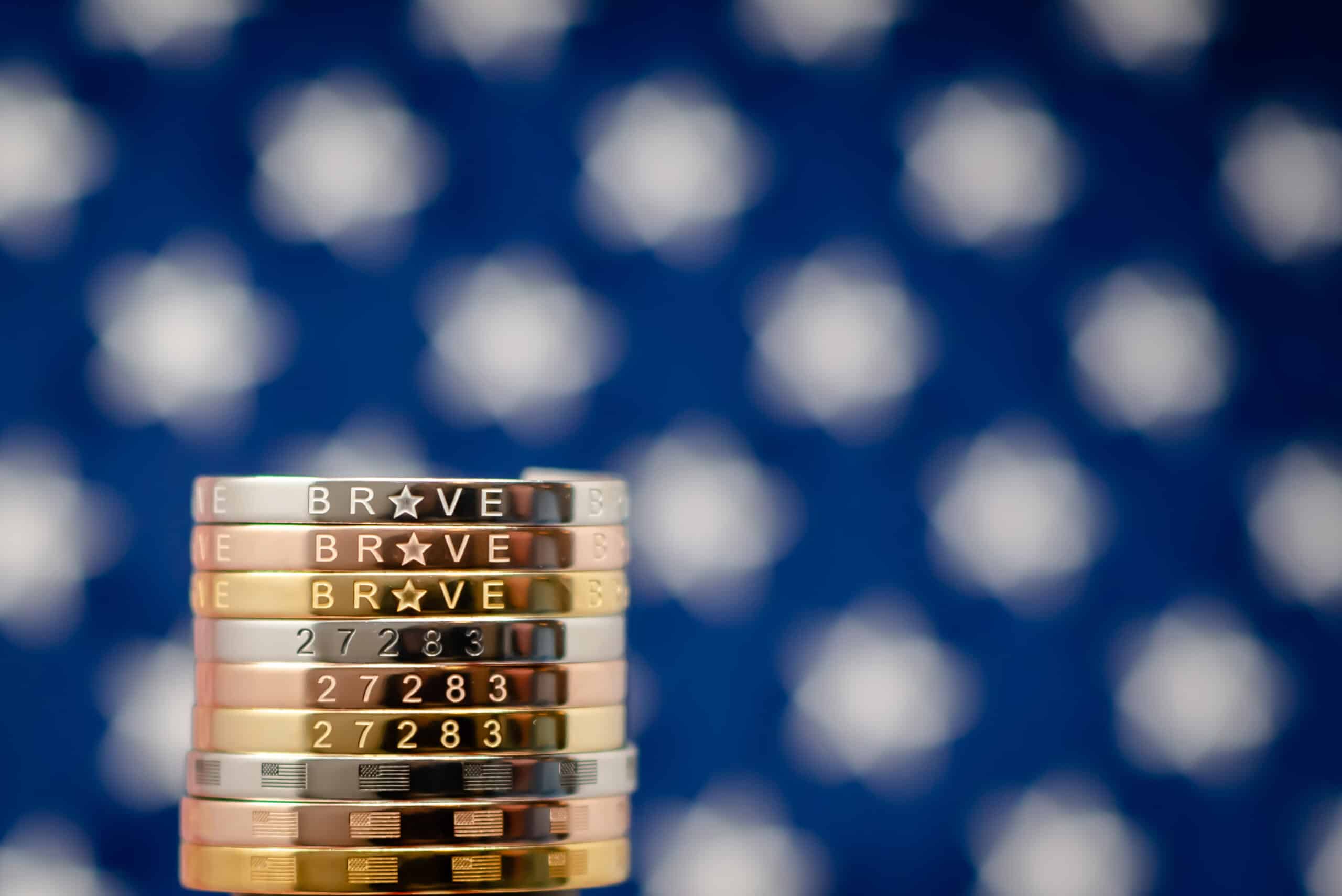 I recently had the opportunity to connect with Lindsay Reilly, the creator of the Bravery Band. The Bravery Band represents the fearless and unstoppable person you can be. It’s just one word and five digits, but involves countless stories. Whether you’re a hero in the military or a hero within yourself conquering life’s everyday battles, there is someone brave in all of us. The Bravery Brand represents the American Dream that anything in life is possible. Wearing the band is a constant reminder of your bravery.

Lindsay kindly gifted me a rose gold Countless Band, which I’ve worn non-stop since receiving it. It’s a great reminder to be brave in my everyday life, especially with regard to Carrots ‘N’ Cake and putting myself out there. I’ve struggled with confidence in the past, so it’s a nice reminder to put those anxieties aside. I love that the message on the band is subtle, using the digits 27283 to represent the spelling of the word BRAVE on your phone pad.

The Bravery Bands come in a number of styles for both women and men. They’re available in three Macy’s locations for a limited time (Northstar in San Antonio, TX, Lenox Square in Atlanta, GA, and Northshore Mall in Peabody, MA) as well as online, along with the bravery bag (it’s super cute!) at braverybrand.com, and also at Lindsay’s style lounge, The Cue, in Dorchester, MA. I love everything that the bands stand for as well as Lindsay’s story and connection to the brand. Read on for my interview with her! 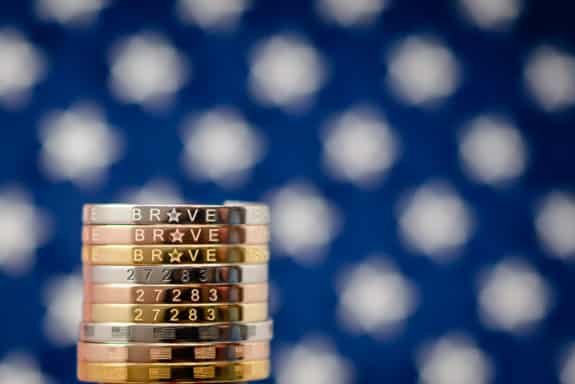 What’s the story/inspiration behind Bravery Brand?

The Bravery brand was started back in 2014 when my Grandmother passed away. She was the Barber Walters of Boston, a socialite and media guru promoting and supporting designers, athletes, and politicians in the area. When she passed I had got a call from David Josef, Yolanda Celucci and a few others saying “Your Grandma helped us, so now its our time to help you.” That’s when I got asked to design the official bag for Boston Medical’s Catwalk for Cancer. I asked myself “What was I going to design that represented both men and women overcoming something that made them so brave? That’s when the American Flag came to me. Something both men and women could both carry as well as the greatest symbol of Bravery.

In 2014, I launched our FIRST “Bravery Bag” for Boston Medical’s Catwalk For Cancer. It was then out of nowhere people kept sending me their stories of where they were wearing their bags, what they were carrying it for and how they were seeing other people with them.

Then, in 2015 I reached out to military non-profits and teamed up with the USO New England and started to give back to our active duty military. The Bravery Bag was born to represent the brave and strong person within all of us whether you were wearing it for yourself or someone you knew!

What’s your background?
I graduated from Lasell College in 2013 with a degree in Fashion Merchandising. While studying at Lasell, I also attended London College of Fashion.
I’ve also been sewing since I was six years old and selling handbags since I was fourteen, which gave me a better understanding of manufacturing and what it took to produce a product. At the age of 20, I was producing and manufacturing my first line of handbags right here in Massachusetts.
Being an entrepreneur, I need to immerse myself in every aspect of the business. I currently go from manufacturing products, listening to peoples stories, to being a buyer and stylist for The Cue, to running the back end of both businesses day in and day out.

Is there a particular bravery story from customers that has stuck with you as especially memorable?
I’ll never forget a few stories that always hit near to the heart but one that I always remember was a girl from college whose card read: “I am brave to have chosen the school I wanted to go to and no where my parents wanted me to go. I now am a freshman at the school of my choice, on the deans list and my parents aren’t talking to me. I am brave for being strong for myself.” – I’ll never forget speaking at that school and reading that story and how much I could feel that girl feeling alone but achieving her own happiness all at once.
Where do you see the brand going in the future?
In my eyes, The Bravery Brand is creating a brand that brings people together as one, and my hope is that our band will be on every wrist in the US.
In the future, I’d like The Bravery Brand platform to be connected to multiple non-profits and companies to help bring awareness and “band together” to create powerful connections. Every wrist and every story!
What’s your favorite band style?
I love them all because they all represent a little piece of me. But if I had to choose, my favorite band would be the rose gold flags. I love how it shows our patriotic side on the outside with a constant reminder of the word written inside “I Am Brave” for that little reminder within all of us!
What’s the inspiration behind the Countless Band?
When I first started the Bravery bag, I knew how powerful it was and what it meant to people. What I realized in that process was that it wasn’t everyday people wanted to say that THEY were brave or that they were wearing it for themselves. Fast forward a few years later when I was creating the Bravery Bands, I knew I wanted one that represented our mission without saying it. I remember thinking up all sorts or logos or symbols that could represent BRAVE, but nothing seemed to resonate with me. It wasn’t till I was driving on the highway one day and a big military truck was in front of me with those giant bumper numbers. It was right than when I was like how do I spell the word brave in numbers? I immediately got out my phone and realized it was 27283 and immediately every bone in my body was like THAT’S IT!!! One word, five digits, countless stories. 27283 is the digits of BRAVE for those who are wearing it for themselves or wearing their band because of someone else it’s a code. 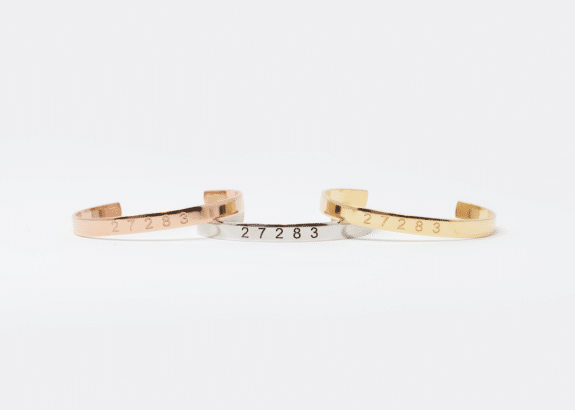 Head over to @carrotsncake Instagram and share what makes you brave for a chance to win a Bravery Band of your choice!
P.S. If you’re local, the Bravery Kick-Off Event will be held on May 23rd at Granite Links with a portion of the proceeds benefiting the USO. Link to tickets here!
PrevPreviousOvernight Protein Oats with Riced Cauliflower
Next13 Things ThursdayNext