BlogHer Food 2009 ended with a bang! Jenna, Kath, and I attended, not one, but two rockin’ cocktail parties. 😉

Of course, we took advantage of the opportunity to get dressed up. 😀

The cocktail party was held on the open roof deck of the St. Regis Hotel, which was the perfect location for this type of event. It felt so swanky! The party was sponsored by Campbell’s Kitchen, so all of the appetizers were recipes made with their ingredients.

Unfortunately, these delicious-sounding appetizers were hard to come by, which was rather surprising and disappointing– considering we were at a party for a food-focused conference. We basically had to stalk the waiters to get a hold of some food! While hunting for food, we enjoyed a couple of cocktails. (The alcohol was plentiful!) I ordered a glass of Chardonnay, while Jenna and Kath opted for Cosmopolitans. The warm, thick Butternut Squash Soup Shots were divine! I could have eaten a whole bowl of it! At the cocktail party, I bumped into Mary Kate of Kitchen Belle. Love her! Kath and I shared a plate of the Braised Beef with Shallots and Mushrooms. I liked this appetizer too– but, I was also incredibly hungry, so maybe that had something to do with it? Thankfully, there wasn’t a lack of Tomato Soup Spice Cupcakes at the party. I ended up eating 3 of them! I have zero willpower around cream cheese frosting. 😳 Recreating these cupcakes is now a top priority for me! With about an hour left of the cocktail party, I ordered a second glass of Chardonnay. It was free, so why not, right? 😉 Towards the end of the night, Jenna spotted sliders, so we made a beeline for the waiter who was carrying them. The sliders were GOOD!

We left the BlogHer cocktail party to attend an after-party hosted by the lovely women of these popular food blogs: The Pioneer Woman, Simply Recipes, and Steamy Kitchen. Of course, I was a little star-struck!

Unlike the BlogHer party, the after-party had plenty of food! From the moment we walked through the door, we were practically bombarded with passed appetizers, cocktails, and a whole slew of desserts. Of course, I loved the desserts the best!

Party attendees were invited to “decorate” their chocolate cakes with a variety of yummy toppings: smoked sea salt, cacao nibs, crystalized ginger, and paprika. I added a little too much of the smoked sea salt to my cake, but I still ate most of it!

For me, the best part about the after-party was the huge sampling of goodies from Foodzie. Foodzie is “an online marketplace where you can discover and buy food directly from small passionate food producers and growers.” It’s basically Etsy for foodies.

I’m pretty sure I tried one of everything from the Foodzie display. I definitely left the party feeling a little sick. 😳

Jenna’s friends from Murphy-Goode were serving wine at the after-party, so I tried a couple of tastes. I was pretty wined-out, so I didn’t end up finishing either glass.

We loved the after-party! 😀

Also sponsoring the after-party was my beloved Starbucks. Of course, I needed to sample something from them.

The nice Starbucks folks mixed me a VIA Blanca, which was made with their brewed VIA coffee (my review), milk, and vodka. The cocktail reminded me of a lot of a White Russian, but with a much stronger coffee flavor. It was heavenly, but I was so full (from baked goods!), I only drank about 1/3 of it.

HP was also at the after-party. They had a bunch of computers that attendees could test out and play with. I’m obsessed with their tiny notebooks! I want one so bad! Don’t you think HP should send me one to review on my blog? 😉

After a little more mingling, Kath, Jenna, and I called it a night and walked back to our hotel room… with the coolest foodie swagbags ever! There were so many awesome products in the bag– fancy knives, a mini French press, an ice cream scoop, lots of spatulas. (Check out Kath’s blog for a rundown of the loot we took home.) I even had to mail some of it home because it wouldn’t fit in my suitcase!

At the hotel (long story short), the three of us ended up staying in a tiny room with just one queen bed. We had hoped to add a roll-away bed to the room, but we couldn’t finagle it and someone had to sleep on the floor. Ever since my hip injury, I’ve had a terrible back, so I offered to sleep on the floor while the other ladies enjoyed the bed.

Sleeping on the floor wasn’t bad at all! I actually sleep really well and woke up pain-free!

We were such grandmas last night! The three of us were in bed (on a Saturday night) before 10:30 pm.

At 5:05 (PST) this morning, a text message from Mal woke me up. It said: “My wife is coming home! Yea!” Reading his message made want to get up and go! I could have slept for another hour, but I just wanted to go to the airport, relax, and get ready to see my family. I miss them!

At the airport, I learned a hard lesson about chicken broth. If you don’t check your luggage, a can of chicken broth is considered a restricted liquid as it is more than three ounces. The security folks didn’t appreciate my BlogHer Food freebie and needed to “inspect” my luggage. Oops! Lesson learned! No chicken broth in your carry on!

I arrived at the airport 2 hours before my flight was scheduled to depart, so I found a cute little cafe, ordered breakfast, and blogged. Life is good.

From the pastry case, I ordered a Low-Fat Pear & Almond Muffin for breakfast. The muffin wasn’t humongous, but had a big muffin top, which is my favorite type.

I paired the muffin with coffee, an orange, and some water.

All in all, it was an amazing weekend! It’s definitely one that I will never forget!

After such an indulgent weekend, my body is ready to get back on track. Mal and I already have plans to hit the gym tonight and make a healthy dinner.

See ya from the EAST coast! 😎 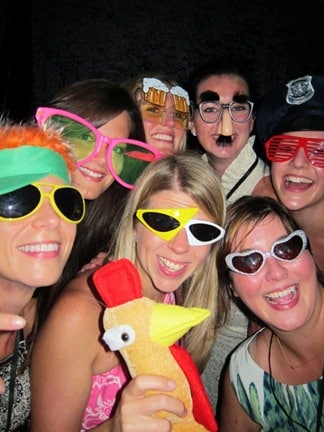 So fun! You guys look like you had a blast!