Behind the Scenes of Murphy’s Pug Adventure 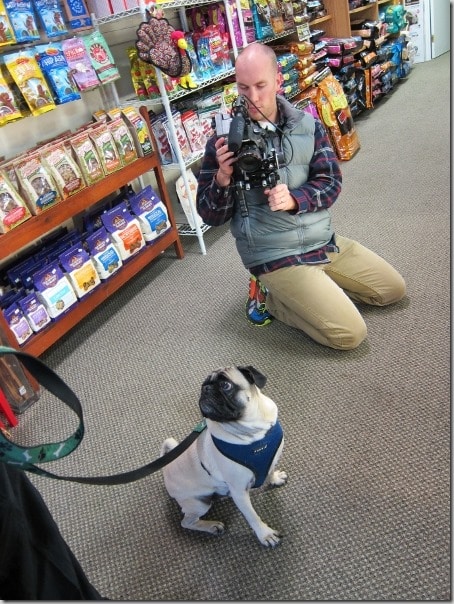 You remember Murphy‘s epic pug adventure from last week, right? If you missed it, you can watch the video here. (Murphy is so cute!)

I thought it’d be fun to show you guys some behind-the-scenes photos from the day. My friend, Andy, is a professional videographer, so he helped me out with my pug adventure video. Andy is a good friend of Mal and mine (he was a groomsman in our wedding), so we had a great time hanging out with him while we filmed, so it didn’t seem like work at all. Murphy obviously had a blast too, so it was a fun day for everyone! Andy met us at our house bright and early and after a quick discussion about the video (I sent him a potential script and we chatted on the phone a couple of times beforehand), we were ready to film! At first, Murphy wasn’t sure what to think. A ride in the car? With a cameraman? But, of course, in typical pug fashion, he was very curious about what was happening around him. This dog hates to miss a thing! Once Andy was all set with his camera equipment, we were off to the dog bakery to get some treats for Murphy. As you know, Murphy loves riding in the car, so he was really excited as we drove along, looking out the window and sniffing the air.

The route to the bakery actually goes right by the dog park that we normally visit. Murphy immediately smelled it and starting barking like a maniac, so we decided to make an impromptu stop, so he could run around and stretch his little pug legs. As always, the park was a lot of fun, and Murphy really enjoyed himself. Mal and I thought it would be fun to make a game out of our time at the park, so we came up with a doggie workout that we could do with Murphy. Of course, we had to make it into a CrossFit-style workout! After our visit to the park, we hopped back into the car and drove to Maggie’s Dog House to get some treats for Murphy. Filming at the dog bakery was a lot of fun because Murphy was SO EXCITED about the treats and toys. He ran around and sniffed everything like crazy! He was like a kid in a candy store! On the ride home, Murphy was absolutely exhausted. He had quite the pug adventure! It was a lot of fun to create this post/video series. I hope you enjoyed reading about Murphy’s pug adventure!

This adventure was proudly made possible by Subaru. Find yours today.