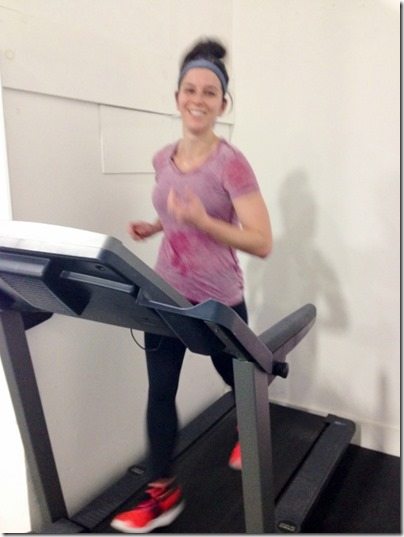 Just wanted to pop in with a little recap of yesterday’s happenings and let you know that my knee is better! Woohoo! I iced the crap of it and took two days of rest and (*knock on wood*) it’s good as new!

Pre-run eats: Slow cooker steel cut oats with a scoop of peanut butter, two eggs (I ate them before snapping a picture), and an iced coffee with SO Delicious French vanilla creamer. After breakfast, I drove Mal to school (his car wouldn’t start because of the cold – people, that’s how cold it was this morning!!), dropped Quinn off at daycare, picked Kerrie up, and then headed to KFIT to use the treadmill because it was COLD yesterday. Run #2 of my training plan was a 45-minute run, so I hopped on the treadmill and cranked out 5 miles. I was a little nervous about my knee, but it held up just fine. No pain. Back in business! After my run, Kerrie and I swung by Marylou’s for iced coffees. Today’s flavor was Kahlua, which actually tasted more like butterscotch, but, of course, was still quite delicious! (If you’re curious, a lot of New Englanders drink iced coffee all winter long. Haha!) Back at home, I iced my knee (just in case) and whipped up a Greek Yogurt Protein Pancake to refuel. (I used Chex gluten-free apple-cinnamon instant oatmeal instead of rolled oats and it turned out great! I loved the apple-cinnamon flavor!) Un-pictured: A couple of clementines and a few million peanut M&Ms because they can’t be in our house without me wanting to EAT THEM ALL. Whyaretheysogood?!? Then, I was off to MGH for a doctor’s appointment. Recently, I’ve experienced frequent bouts of lightheadedness, temporary black-outs (it sounds worse than it actually is), and headaches, which only last for a few seconds, but it’s still scary, especially when I am holding Quinn. I thought it might be related to starting Remicade and/or weaning off steroids after being on them for so long, but my GI doctor didn’t seem to think so, so he suggested meeting with my primary care doctor to check things out. On the T ride to MGH, I snacked on a rise protein bar, which was just okay. I usually like their bars, especially the protein ones, but I wasn’t a fan of this flavor””too dry and bland. My doctor did an EKG and scheduled me for another Holter Monitor test. (I had one back in 2009, which didn’t say all that much.) She thinks my blood pressure is wacky because of an especially slow heart beat, but possibly related to the Remicade. My platelets are also really low again, but that’s not related to the lightheadedness and is likely a side effect of the Remicade. I’m a mess. Haha!

When I got home, I played with Quinn for awhile. It was just about dinner time, so we gave him a little Stonyfield to try, and it was a huge hit with him. This kid loves to eat! And, man, he’s cute. I love this age! My dinner was a salad topped with canned tuna, avocado, walnuts, and croutons. Delish! After dinner, I filled half of a pita with peanut butter and chocolate chips for dessert. Ok, well, I had two of them because the first one was so darn delicious. Peanut butter + chocolate = THE BEST.