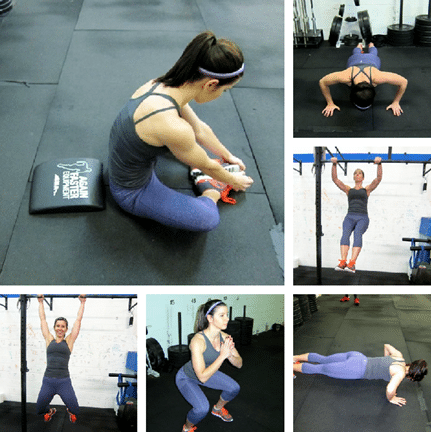 Good morning! Happy Monday! How was your weekend? Mine was low-key, but wonderful just the same.

I started Sunday with a piece of delicious French Toast Bake topped with strawberries and maple syrup. I later ended up adding a couple of scoops of peanut butter for some staying power. After breakfast, I headed to open gym with Mal. Our box did “Barbara” on Monday, but we missed it and were pretty bummed about it, so we decided to do it together yesterday.

I was recently given a $50 gift card to buy some workout clothes from the Active by Old Navy line, so I wore my new gear to open gym. I went shopping at Old Navy on Saturday and ended up choosing the Women’s Compression Capris in Retro Violet and the Women’s Active Seamless V-Neck Tank in Carbon . The Compression Capris were comfy, flattering, and moved well during my workout (yay!), but the main reason I picked them was the color. The Retro Violet was actually a heathered purple, which is a trend I especially love to see on workout gear. I love that it’s a little different. I mean, ALL of the workout capris that I currently own are black, so I was excited to see some color.

The Seamless V-Neck Tank was made of a soft, smooth, and fitted moisture-wicking fabric and had a build-in shelf bra, which was actually a lot more supportive than I expected. (I always pair a sports bra with these kinds of tops, but I could probably wear this one alone for a low-impact workout.) Since it was a compression top, it had a nice, snug fit and the extra straps definitely helped to keep things in place. Just a quick note on the sizing: It seemed like these tanks ran a little small since they’re compression gear. I ended up buying a medium, which fit me perfectly. Check out the collar! And the thumb holes! I also loved that the body was extra long, so I didn’t have to worry about it riding up during my warm-up. I was sold and had to have it. I planned to buy it with my own money, but when the cashier rang everything up, all three pieces were on sale. Woohoo! Nothing that I picked cost more than $15! And starting today, Active by Old Navy is 40% off. Hop on that! For the price, Old Navy really does have some great workout gear.

Ok, back to the WOD… I ended up doing the last two rounds of push-ups on my knees, but I managed to do all 75 (holy crap) unassisted pull-ups, which is by far the most I’ve ever done in a WOD, so I was psyched about my performance. I finished in 34:31. Post-WOD: Tired, but happy… and covered in chalk (always). After CrossFit, I came home and chugged down a protein shake made with vanilla fitmixer protein powder, almond milk, and Molten Chocolate iced coffee, which tasted absolutely amazing (creamy coffee + chocolate and vanilla = heavenly). I actually considered making another one, but decided that I needed to eat something more substantial, so I whipped up an egg, Asiago cheese, and bacon sandwich on a Microwavable English muffin. It hit the spot. This post is sponsored by Old Navy. Check out Old Navy’s Active wear in stores or at oldnavy.com #GetYourActiveON