A Slow Start to the Weekend 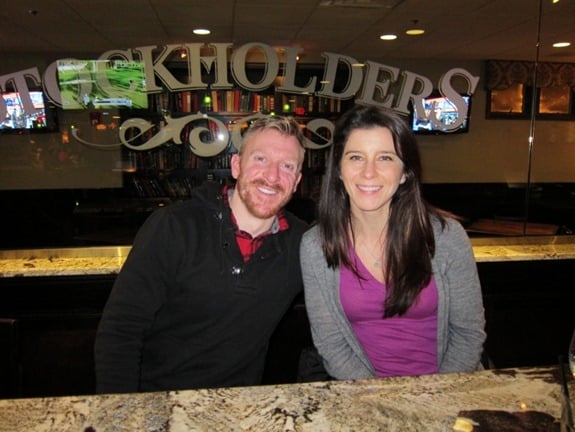 Last night, Mal and I planned to go out to dinner in Boston, but when we checked the traffic report before leaving our house, it said it would take us almost an hour to drive less than 20 miles into the city. Ahh, no thanks. So we came up with a Plan B, which was having dinner closer to home at Stockholders.

Mal and I have been to Stockholders a bunch of times in the past, but when we went there more recently on New Year’s Eve for a drink, we said we wanted to go back again for dinner sometime soon, so our Friday night plan turned out quite well. We ended up going to dinner around 5:30 PM last night (yay, early bird special), so we snagged a couple of seats at the bar, no problem, and ordered some drinks. I went with a Kim Crawford Sauvignon Blanc, which is now my go-to wine at restaurants. I’m so happy when I see it on a wine list. It’s so good! Then, Mal and I shared an order of Fried Mac & Cheese Balls. They were so tasty! Cheese + fried = YUM! For my entrÃ©e, I ordered one of the specials, which was risotto with scallops, chorizo, Manchego cheese, asparagus, and tomatoes. It was good, but not amazing. Mal ordered the Sirloin Tips, which were amazing. He shared a bite of them with me, so I had major food envy. It was a nice, low-key dinner out. Good times. Mal and I ended up going to bed pretty early last night, so we both woke up bright-eyed and bushy-tailed this morning. Murphy, however, was not as energetic. (I think he stayed up late watching Tosh.0.) Murphy was so stubborn about getting out of bed and going for his walk this morning, so I ended up putting his harness on him while he was still in bed. He looks so annoyed with me in the photo below! Haha! After I walked the pug, I whipped up a French Toast Breakfast Scramble with peanut butter to give me some energy before CrossFit. What’s your favorite way to spend a Friday night? Do you tend to be more low-key on Friday nights compared to Saturday?