A Fun, Little Day for Murphy & Me 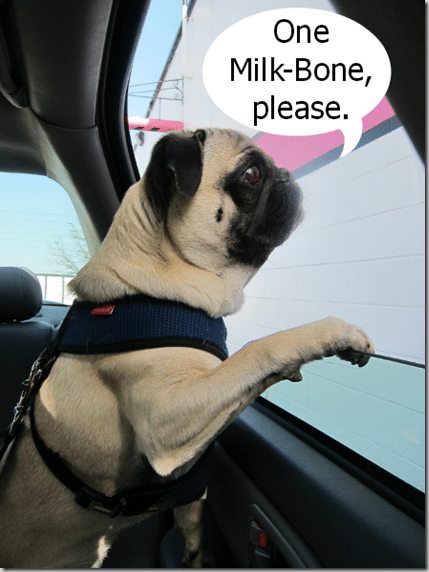 Happy Hump Day! I hope your week is off to a fabulous start!

I started yesterday morning with my favorite (current) breakfast: green juice + a toasted, gluten-free English muffin with peanut butter and banana on one side and sunflower butter and banana on the other side. I could seriously eat this breakfast every morning. It’s the perfect combo””delicious, nutritious, and satisfying! After breakfast, I got to work. Since I’m leaving for Ireland this weekend, I’m writing a bunch of posts, including a couple of sweet giveaways, to publish while I am away. Be sure to pop into CNC next week to see what’s happening!

While I worked in my office, Murphy played the “indoor-outdoor game,” which I am sure some of the dog (and maybe cat) owners are familiar with. Murphy can’t decide whether he’d like to be indoors or outdoors, so he scratches at the door (or barks if I don’t hear him right away) every 5-10 minutes. It’s super annoying. Eventually, I just left the door open so Murphy could come and go as he pleased. But, as soon as I did that, he went into the living room and laid down on the couch. I guess the game wasn’t fun anymore if Mom wasn’t opening and closing the door for him every 5 minutes. What a butthead. A little while later, I took a break from working and made myself a snack. I had a running + CrossFit date with Kerrie at 11:15, so I needed a little something in my stomach to hold me over through my workout and until lunchtime. Kerrie and I met for the Kick Ass Virtual 5K that Abby organized to benefit Team Challenge. In honor of the event, I wore my “I {heart} Sweat” shirt (a portion of its proceeds benefit the Crohn’s & Colitis Foundation of America). After our run, Kerrie and I headed to CrossFit. The Workout of the Day was “Christine,” which I had never done before. (I always get a little excited when one of “The Girls” comes up in the programming at our box!) I wanted to do the workout as prescribed, but the body weight deadlifts just weren’t happening for me. I loaded 135 pounds on my bar, which I deadlifted a bunch of times, no problem, but I knew by round 3 of “Christine,” my form would probably get pretty ugly, so I scaled down to 105 pounds, which was a much better weight for me. I finished the WOD in 11:02””just seconds behind Kerrie!

After CrossFit, I came home, showered, and then made lunch, which was a couple of Trader Joe’s Vegetable Masala Burgers with some leftover risotto from the night before. I finished off lunch with some trail mix and dried apricots. After lunch, I got ready to run some errands. It was such a nice day, I felt bad leaving Murphy inside at home, so I took him along for the ride. Our first top: an oil change. I planned to take Murphy for a walk while my car was being worked on, but the mechanic owned a pug himself, so he invited us inside to wait. He was a big fan of Murphy! After the oil change, I stopped by Marylou’s for an iced coffee. Beautiful weather = iced coffee. Murphy never forgets where he gets treats from, so when my car approached the drive-up window, he popped his head right up. Murphy got a Milk-Bone from the nice woman at Marylou’s and ate it in the backseat of my car. A win for Murphy! When I got home from running errands, I took Murphy for his afternoon walk. It was such a nice day, especially with a White Chocolate Chip iced coffee in hand! After Murphy’s walk, I finished up some work and then headed to the kitchen for an afternoon snack. I had some sweet potato chips with white bean & basil hummus, which was a wicked good snack. A little while later, I made dinner, which was Cheesy Garlic and Herb Brussels Sprouts with Chicken Sausage. Once again, this meal was a big hit in our house. Mal must have said, “This is so good” at least a half dozen times while he was eating dinner last night. The evening ended with a few Paleo chocolate chip cookies. Mal and I finished off the batch!

Bananas cooked in dark brown sugar, butter, rum, and cinnamon, served over ice cream with pecans”¦ sounds absolutely delicious, right? Obviously, Bananas Foster is quite a decadent dessert, but like any tasty treat, it’s not low in calories or friendly on the waistline. Instead of missing out on this classic dessert, try a lighter, smoothie version. It’s almost as amazing as the real thing!

Does your dog (or cat) play the “indoor-outdoor game”?

What food or drink does warm, sunny weather make you crave?

P.S. Be sure to enter my giveaway to win some goodies from The Laughing Cow!