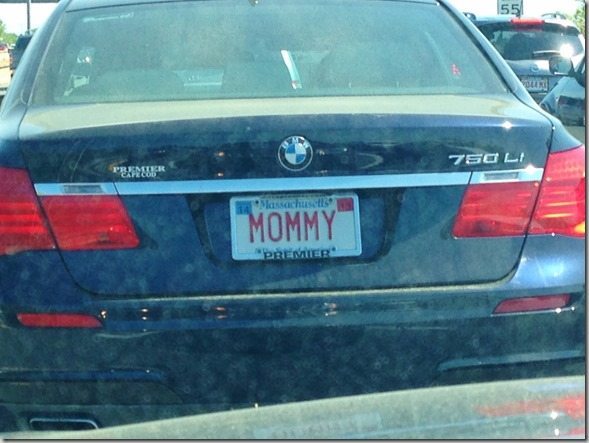 Yesterday started with a delicious, but not very pretty-looking two-ingredient pancake with almond butter, strawberry jelly, and chia seeds on top. I swear it tasted way better than it looked! After breakfast, I did a bunch of work and then headed out to my 40-week doctor’s appointment. On the way, I stopped by Marylou’s for some iced coffee. I went with a Peanut Butter Wonderful, light on the mocha, milk, and no sugar. FYI: That’s the way to order it if you want a sweet, creamy iced coffee, but not a total sugar bomb. On the drive (well, technically, while sitting in traffic), I saw this “MOMMY” license plate in front of me. I thought it might be a little foreshadowing of exciting things to come, but no dice. Everything went well at my doctor’s appointment. She told me that I’m 2 cm dilated and about 50% effaced, which she said was good progress. She also said 90% of women go into labor by 41 weeks, so she was hopeful something might happen soon. If I am still pregnant come Monday when I have another appointment with her, we’ll talk about induction.

Since I’m past my due date, my doctor sent me for a Non-Stress Test (NST) and an ultrasound to make sure the baby’s heart is still strong and steady, the placenta is still doing its thing, and the baby is getting the oxygen he needs”” probably some other things too, but basically just checking everything is still ok in there. The NST lasted about 20 minutes and everything looked great with Baby H.’s heart. The monitor that I was hooked up to actually showed that I was having a few irregular contractions, which I couldn’t feel, but means something is finally starting to happen. My stomach was also feeling kind of sore last night, which I told my mother-in-law this morning and she said that might be some contractions too.

Things also went well with the ultrasound. The placenta is working fine and Baby H. has plenty of oxygen, which the ultrasound technician suggested might be the reason for him still moving around like a maniac. She explained that when babies don’t have a lot of oxygen, they move around less, but Baby H. NEVER stops moving and he doesn’t seem to care that there’s no room for him to do so. He just punches and kicks his little heart out. My stomach basically looks like a bowl of Jello because he’s moving around so much”” even during the NST and ultrasound. Haha!

The ultrasound also estimated that Baby H. is about 7.6 pounds, and I got to see his little squished face in 3D, which was so cool. The technician said he looks really “comfy” inside, but he looked super cramped to me! When I got home from my appointment, I was more than ready to eat, so I heated up some Chinese leftovers for lunch. And then I took Murphy for his afternoon walk. The ice cream man drove by us during our walk, and Murphy barked his brains out at him. He loves to hate the ice cream man. #funpolice After our walk, I busted out some work while snacking on a bunch of dark chocolate chunks + almonds, which apparently is the snack of the week. #love

Dinner was quick and easy: ham and cheddar lettuce wraps with mustard. Mal and I broke out all of the ingredients and just made them while watching TV. Easy-peasy. When do you think Baby H. will get here? Any guesses?

PrevPreviousThings You Really Loved As A Kid (Like Dinosaurs)
NextChicken, Bacon & Balsamic Potato Salad with LimeNext