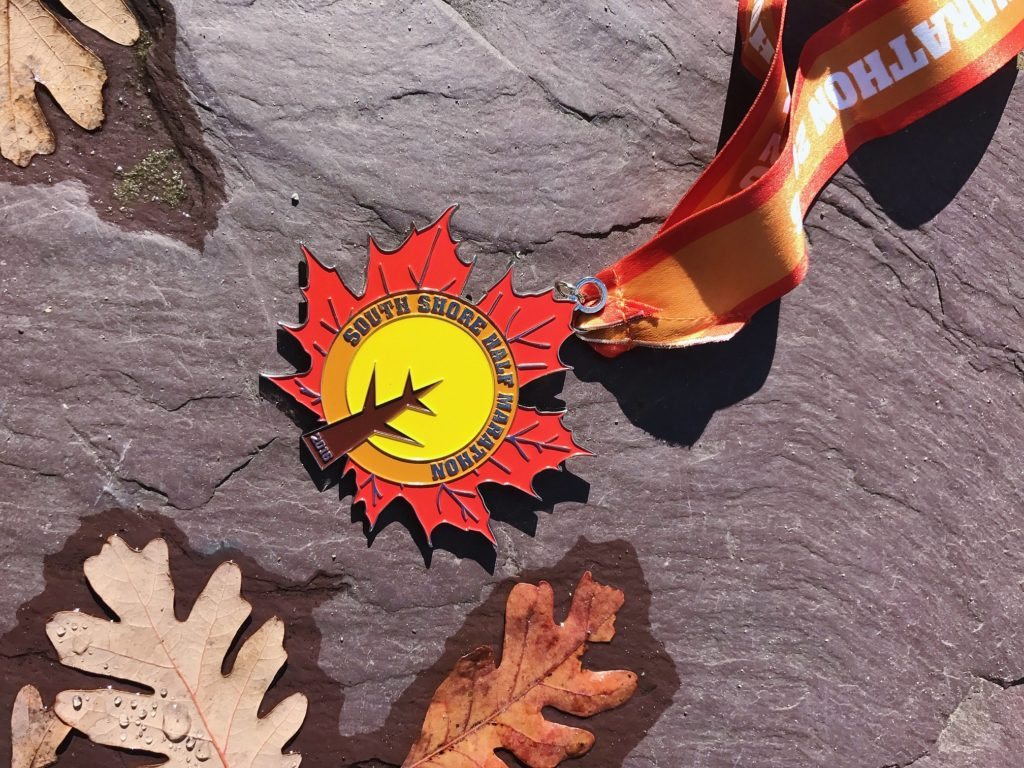 Success! South Shore Half Marathon complete! And it was so much fun running it with friends! One of our friends lives near the start line of the race, so we walked over right before things kicked off promptly at 7:30 AM. We arrived at the start line just minutes before the gun, so we had a little trouble lining up in our respective corrals. It was just too crowded to finagle our way back, so we ended up starting in the 7-minute corral. I realize this is a HUGE runner no-no, and it personally drives me crazy when people line up at the wrong pace, but we literally could not move. A guy next to me even joked that this cluster was “the only thing [lining up from front to back] that they [the race organizers] hadn’t figured out yet.” Yup, so true. The South Shore Half Marathon, only in its third year, is extremely well-organized, so I smiled and agreed. After last year’s half, I couldn’t say enough great things about the race. And, honestly, it was probably our fault for waiting until the last-minute to get ourselves situated. Anyway, so we’re off and running. My race strategy was similar to last year’s: Start with “all-day miles” + Joy & Claire until mile 8, slowly pick up the pace until mile 10/11, and then run as fast as possible until the end. And, guys, I really thought I was cruising along.

The RunKeeper app on my phone was all messed up (it said I ran 15 miles by the end of the race, so I’m sure my splits were off), so I was doing pace/distance math each time I passed a clock on the course. At mile 11, the clock read 1:40, and I felt really good, so I thought I could maybe beat last year’s time. I have no idea what happened, but I felt like I was sprinting for the final 2 miles. I honestly thought when I saw the clock at the finish line, it would read 1:55 or so. Unfortunately, when I made the turn to the finish, it said 1:58. Whomp whomp. I finished in 1:59:04 (9:05), which isn’t a terrible time, but not what I expected. I really thought I was killing it, pace-wise. I never once felt like death and actually felt strong for the majority of the race. It’s weird. I’m disappointed with my time, but I’m really happy with my performance. I truly gave it my all and FELT like I ran a good race. Time-wise, I have no idea what happened, but, hey, I enjoyed myself, and I’m glad I finished. Post-race, we enjoyed an after-party with free food and beer at McGreal’s Tavern. And then we headed across the street to The Tinker’s Son for brunch. Even though I didn’t get the time I wanted, I still love this half marathon and can’t wait to run it again next year! 🙂