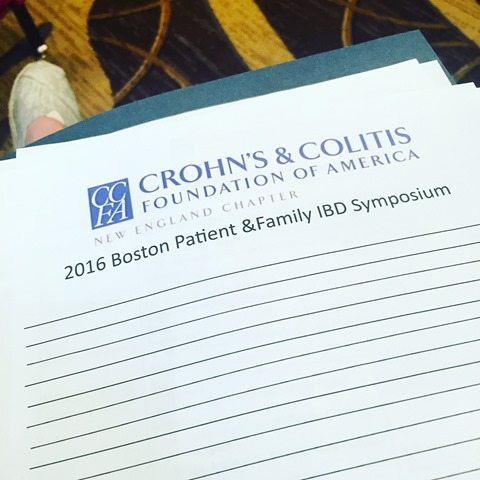 Last Sunday, I attended the 2016 Boston Patient & Family IBD Symposium, which was hosted by the Crohn’s & Colitis Foundation of America (CCFA). It was a half-day event (with breakfast!) for people living with IBD as well as their families. The agenda included a number of interesting and educational talks from top doctors in the area, including “IBD Outside the Gut” (the disease and its associated drugs can affect many other parts of the body) as well as “IBD and the Microbiome,” which was super interesting. We also heard from a patient and family panel, which was surprisingly emotional for me. My heart broke for the women as they told their stories and struggles. They were all too familiar, and I could relate to so much of what they said. After that, we had the opportunity to chose two of four workshops to attend:

The event concluded with a keynote from Dr. Vijay Yajnik (my doctor!!) about “What’s New in IBD,” which, of course, was my favorite part of the entire symposium. I have so much respect for my doctor (and have professed my love for him a number of times on CNC), so I was excited to hear from him. I actually bumped into him right before his talk and he stopped to give me a big hug and asked how I was doing on Entyvio. I told him okay, but still not in remission. He replied (a number of times) that he thinks it’ll work for me, so I hope he’s right. There was a lot covered at the symposium, so I decided to highlight the parts that I found especially interesting and possibly helpful to other IBD patients.

IBD AND THE MICROBIOME I’m so glad that I attended the Boston Patient & Family IBD symposium. It was educational and informative and (mostly importantly) it took away some of the isolation that comes along with IBD. It’s definitely not a glamorous disease, so it was helpful and even comforting to be around people who get it. A big THANKS to the CCFA for putting on such a wonderful event!