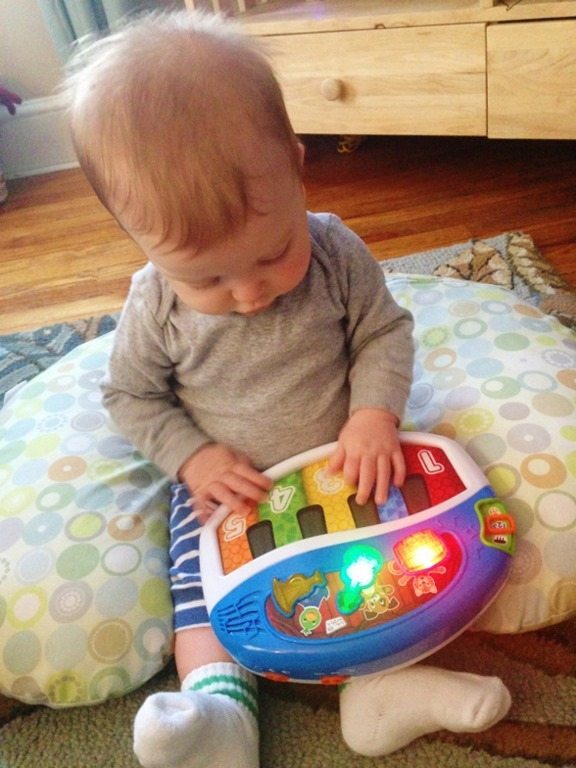 You know that game “Two Truths and a Lie?” Well, if not, it’s an icebreaker game. You think of three statements about yourself: two are true statements and one is false. Then, the other people guess which one is a lie. Simple as that! I thought this game would make a fun post, so here are 10 truths and a lie””many of which are based on things that happened yesterday, but some are totally random. Feel free to guess the lie in the comment section! I bought Quinn some new toys yesterday. He loves the xylophone at daycare, so I wanted to get him one for home. We tested out a bunch of different options at Babies R Us and eventually decided on a Baby Einstein play paino that he loved immediately. Look at that concentration! Ok, let’s mix it up with some random facts”¦

The guys at CrossFit have been raving about this thing. I’m tempted to buy one myself just so I don’t have to foam roll all the time. Think it would work?

Mal and I started watching Parenthood on the recommendation of a few friends. We’re only two episodes in, but we’re not sure how we feel about it. Should we keep watching it? Does it get better?

We have a big bag of peanut M&Ms in our refrigerator, but I haven’t eaten a single one in 3 days.

I finally tried the S’mores Quest Bar (nuked in the microwave, of course), and I am obsessed. Now I am debating buying a whole box. Is that a good idea or a bad idea? Side note: Monica told me about this Groupon deal for Quest Bars, but, unfortunately, they don’t have the S’mores flavor. When I make pureed bananas for Quinn, I always steal a couple of bites because they are so good!

I sleep in a bra every night.

I ran 6.25 miles on the treadmill last night and felt awesome””probably the best I’ve felt since starting my marathon training! Which statement from above is a lie?